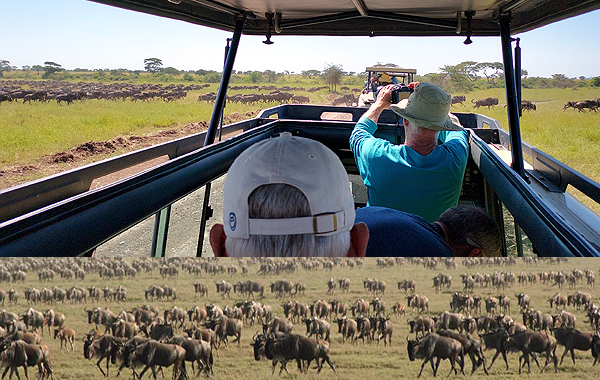 So by the end of our 5th day in the Serengeti we topped 30 lion including three kills, 3 cheetah, thousands of elephant and literally tens of thousands of gazelle. Oh, and a python, serval cat and an absolutely wonderful chocolate cake presented to us with song at our last camp!

But remember this safari is “chasing the herds” and we’d only seen a couple hundred wildebeest. No real surprise, but the pressure was on.

Radio chatter (which only reaches about 10k) wasn’t helpful. You call a camp and ask honestly, “Is any of the migration there?” and inevitably you’re assured that several million animals are right outside their mess tent. Incoming drivers insist that they’ve seen the whole kit and kaboodal because no one wants to admit otherwise. So even after five days gathering intel it’s sort of a crap shoot.

Tumaini and I decided that at least a portion of the great herds had to be in the western corridor, probably around the Musabi Plains. This would be a little behind normal, but the rains have been so good and extended for so long that it would make sense.

We were in the Moru Kopjes. The Musabi Plains was pretty far away, a good couple hours or more at breakneck speed. So everyone got excited and agreed to have breakfast at 630a and leave promptly at 7. So the stage was set!

We had our last dinner in Moru to a sunset firing up bits of blue horizon peaking out of the several days of heavy overcast. Lion grunted pretty close, hyaena whooped further away. Everyone was so excited and the camp staff bid us goodbye with a dance and song and fantastic chocolate cream cake!

I kept my outer flaps closed, which I rarely do because it muffles the sounds, but it was so cold! My thermometer said 52F inside the tent and believe me in the bush that’s freezing. I knew it would drop another ten degrees by morning. So I kept my clothes on while brushing my teeth and then hopped into long sweat pants and thick socks and dove under the thick duvet, pulling every possible piece of fabric over me.

Slept like a log. Usually wake before the alarm, but not today. 5:15a in the pitch black with temps now in the 40s was a hard mission to undertake, but the camp has 24×7 solar lighting, and there was no wind.

I finished packing and writing as the gentle syncopated songs of hundreds of ring-necked doves just preceded dawn. Felt warm enough to tie up my outer flats as our tents were pointed directly to the sunrise. Then as light exploded into a beautiful cloudless sky the red-necked francolin started to scream bloody murder.

As usual Mike (who is on his 11th safari with me) was up at the mess tent just after me and we drank some tea and coffee waiting for the others and trying to check our emails. This is a really remote camp, at the far southern end of the Moru Kopjes, so it was remarkable they had any wifi at all.

The group all got down well before the scheduled 630a breakfast and started exchanging stories of lions behind them during the night and the beautiful sunrise.

Eighty-one year-old Ellen broke her weight-watchers routine and smothered a piece of toast with peanut butter. Steve (who was with me in November and a half dozen times before that) ate a robust cooked eggs breakfast after his “day of rest” because of a little bit of tummy upset. Sam as usual was talking joyously about everything while editing the 4000 pictures he took yesterday. Ryan as usual being the youngest, arrived last and ate the most. The rest of the group ate up all remaining eggs of any cooked version, all the bacon and sausage, yoghurt and beautiful fruit sticks — we wiped them out!

Into the cars and off at 7 as planned. First task, check “the tree.” The tree was remarkably close to camp and when we left the day before a leopard slid out of it. When we returned in the evening lions were strung on it!

Nothing there but it made us all reminisce on the fleeting glimpses of leopard we’d seen. The Moru has huge leopards. Steve mentioned that one looked the size of a lioness.

But after that strategic stop we moved into high gear. After a toilet stop at Mawe Upe we cruised into the western corridor as the clouds cleared and the day heated up. Where the day before we were often sliding several-feet deep in mud we were now throwing up clouds of dust.

We past scores of animals but it was understood the mission was to prevail no matter what! Well, except for the monitor lizard laying eggs and covering up her nest. Had to stop for that. And then the several thousand zebra strung across the Seronera plains indicating the tail-end of the migration. Had to get a panorama of that one.

We whizzed back and forth along the Seronera River, hit the main road north, veered onto the western corridor road and floored it. The closer we got to our target the more certain T and I felt we made the right decision: more and more zebra and wilde clustered under the gorgeous Serena mountains. The morning light twinkles every one of the billions of thorns on the millions of acacia covering the hillsides.

We started to see great raptors soaring under the newly formed puffy white clouds and vultures looked as if they were blinking as they moved in and out of the cloud’s shadows. All this bode really well.

There aren’t a lot of camps or lodges in the western corridor so the radio traffic was scarce, but what we heard was really encouraging. One old man on the radio was saying, “Nyumbu nyingi nyingi nyingi!” over and over with such delight T and I broke out in laughter.

My heart dropped a beat just slightly when we hit the eastern edge of the Musabi Plains and there were only a scattering of wilde. But T said not to worry and we crossed the Grumeti River for one last time and left a thick acacia and mahogany forest and bang, there were the western Musabi.

It’s a golden prairie. It’s sort of a circle about 5 miles in diameter. Wonderful acacia hills border its west, south and east and lush, thick forests lining the Grumeti River make its northern border. We arrived just as … well, maybe 10,000 wilde were running cross the road.

We stayed there for more than an hour, slowly taking this track or another. We watched groups play in mudholes, dash into the river. We watched misbehaving young ones sprint in the wrong direction and big males still hyped up from the May rut jumping up and down even as the whole mass ran east.

But the best part were two sets of lion, each of them on a kill when the 10,000 wilde tripled in number with what looked like a wave of kelp crashing onto us. One of the lionesses jumped around in mock hunting moves just to keep the line from stampeding over her. The other tried to tempt one part of the group away from their kill by showing herself in open prairie.

Boy did that stop the herd! They all faced her and as all prey is wont to do, stepped cautious and anxiously towards her just to make sure she was always in view. Clever little cat, she’d hide behind a bush and really confuse them so that her sister could eat!

We waited until about 30,000 had moved through then went just wee bit backwards and climbed a hill to set out lunch. What a wonderful morning! We sat watching the distant Musabi Plains move like a billion bolts on a slow-moving conveyor belt, only they weren’t bolts, they were wildebeest.

So mission accomplished. And there’s no credit due more to anyone than Lady Luck. You’ve got to stick to the roads and tracks in the Serengeti, no off-roading. I figured by the end of the morning we’d seen around 35,000 frantically moving, running, jumping wilde.

That’s only only 2% of the whole herd. But they were on the move exactly as they have for millennia: from dying grass to new grass with the same group comedy and energy that they muster year after year. Steve and I wondered if its innate (biological, genetic) or behavioral. The mysteries of such great experiences create memories that never end and bring you back year after year.