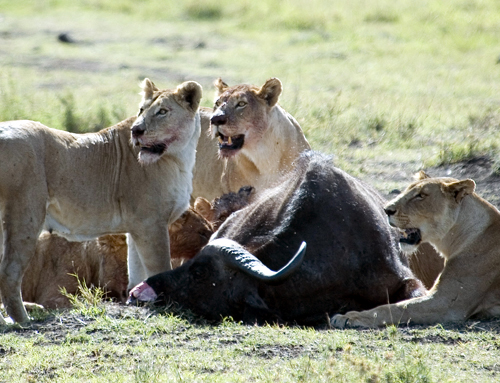 It should have been the best day of his life. Instead, with every step he made walking away from the big black-maned pridemaster who was seated on the veld like the sphinx watching him, he pressed his eyes closed, lowering his head slightly. I wasn’t sure since I was looking at him through my binoculars from about 80 meters away, but I think he was in great pain.

Still, his belly wasn’t thin. In fact, it was pretty full. In fact all 11 in the pride including the kids had full bellies. The wilde must have been killed 2-3 hours before we arrived shortly after dawn, but it was already nearly licked clean.

It was a terribly cold, drizzly overcast morning. It was more like a mid-May morning than early June. By early May, though, everyone thought the rains had ended early. Apparently it was only a pause.

The rains are good, of course, for everything on the veld. But it drops the temperatures at the crater to near freezing at night, and we left on the game drive before first light. It was so cold! But our efforts proved so wonderfully successful as once past Big Tree onto the floor we came across the kill.

It was the first such kill seen by Laurie, Sam and Karen. The rest of the group are all veterans to East Africa but it was still exciting. By this time most of the eating was over, but there were still a lot of paws and bellies strung over the carcass.

The three 6-month old and one 8-month old cubs were goofing around with each other, stalking the black-backed jackal as if they were on another big hunt! I counted 14 jackal around the kill and wondered why there weren’t any hyaena, so I searched the veld and discovered not too far away another kill that about a dozen hyaena were tearing apart. So no need to tempt the king of beasts.

But when I was looking for the hyaena I found the 12th member of the pride, the beautiful young male. He was just getting his full mane. His coat was gorgeous, yet to be scarred by lots of fighting. But his face was a mess. I knew this didn’t have anything to do with killing the wilde.

So I quickly looked over the other adults. Sure enough, they had a number of new wounds on them. Only one, a side puncture, looked as if it had come from the actual take-down of the wildebeest.

So as the teenage male tried to rest well away from the rest of the pride, with the grand pridemaster keeping a close eye on him, I knew what had happened.

It was time that Johnny get going. Shortly he’d grow bigger than his mother. The pridemaster would have nothing of that. They had probably all tried to force Johnny out for some time, then this wildebeest came into their house.

A vibrant young male like this might even have first strength and certainly more stamina than the pridemaster. So after the females had taken down the wilde, as is customary, the males come in to eat first. That was probably when the fighting began.

Not only would the pridemaster try to kill Johnny, but the females would now get involved and the mayhem was shown all over their bodies. One grand female had part of her scalp flipping in the morning breezes. The pridemaster had new wounds on his hind and front right paw. Once a fight like that ensues it’s everyone after everyone.

Johnny had to have prevailed for a short time. His belly was full. His ego was probably pretty boosted, too. But now, watching the way he walked and the distance he kept from the pride, I think he realized it was time to go.

Time to start his own life, make his own kills.

[Having trouble getting enough bandwidth to upload photos taken on this safari, so the photos published with the blog are in my cloud library.]