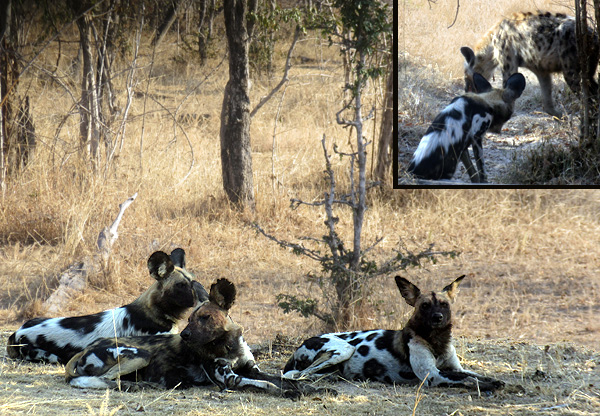 Finishing our first extraordinary dinner on the banks of the Luangwa River, the best of South African wines were still pouring into our glasses. Hurricane lamps lit our elegantly set table and the southern cross with a million other twinkling stars bounced off the river like fireflies.

The robust conversation ebbed with the last of the chocolate-laced profiteroles washed down with still more Shiraz, and the African symphony which of course had never abated took over the night.

Here along the Luangwa River it’s mostly but by no means exclusively the deep and loud rippling guffaws of thousands of hippos. If you happen to wake in the cold of the night you’re likely to hear the soft saw-grunts of the leopard and the distant rhythmic declension of the lion’s grunts.

Every so often baboon erupt in incredible shouting as someone accidentally bumps into someone sleeping next to it, or less frequently the terse barking alarm that wakes the family to the danger of a snake or leopard.

And then always in the intervals between these common and expected sounds there’s the blood-curdling whoop of the hyaena.

This so distinctive sound comes randomly and effortlessly from this gruesome animal. The only way to describe it is to suggest the face is lowered in a soft growl and then whips upwards in a blood-curdling wail as if to as if to launch fear into the night.

The next morning we divided into two groups: those who wished to walk and those with me who would take a game drive. I don’t approve of walking, anymore, despite having done it in so much of Africa for so long. Times have changed. There are too many animals thrust against too many new farms, villages and even cities. Add the chaos of climate change and you have a recipe for disaster.

But I very much respect clients who have done due diligence, and some of them definitely wanted to walk in Africa. So I chose camps first built by the famous guide, Norman Carr, who pioneered walking.

Carr died in 1997. Were Carr alive today I wouldn’t be surprised if his views paralleled my own, but today it’s not just his camps. Virtually all the lodging in Luangwa promotes walking.

So off we went in two distinct groups. The walkers got exercise, learned of scat and speciation, saw a couple animals at great distances while we …

… in our powerful open-sided Landrover rounded one sandy track and encountered the prize of almost any safari. Sitting in the road as if angrily waiting for us, wild dog are remarkable creatures. Like pet dogs they have a variety of easily discernible, unique personalities but unlike pets they’re wanton killers.

After staging an auspicious return from near extinction, though, their populations have taken a serious turn for the worse and this is why they’re so precious to find.

There were six in the family we found the first day. They were incredibly healthy. I thought these the most colorful palomino dogs I’d ever seen.

Five of them were resting but one sub-adult male was walking back and forth into some thick bush. He kept flicking his massive ears at us then lifting his snout to smell us, but the main cause of his anxiety was on the other side of the bush: a hyaena!

Hyaena easily weigh three times that of a dog and have jaws capable of biting one of them in two. But they don’t eat the dogs, they follow them! Like most carnivores dog don’t eat bones, stomach or certain organs or feet. Hyaena do. Let the dog do the hard work, then come in for the leftovers.

Hyaena follow lion and leopard, too, but in those cases they’re much more discreet, always hanging back for fear of getting whipped to death. Dog can’t whip a hyaena to death.

We watched junior race back and forth at the hyaena which was trying to sleep. It nipped its hide, snapped out pieces of its hair, while the hyaena – which could have killed junior in an instant – simply growled and barred his teeth, somehow mustering the patience that would lead him to a fulsome meal.

Totally coincidentally our walking group came within about a mile of where we were watching the dog. We didn’t know it at the time, but the dog did. They have among the most acute senses of any animal in the wild.

They fell in line behind the alpha female and quickly disappeared into the deep, gnarled bush. We followed them for a while, but then the forest closed over us. As we retraced our tracks we came back to where we first saw them.

The dumb hyaena was deep asleep.

Day 3 ditto. Walkers went off. Drivers went off later and almost immediately encountered a new pack of dog. This time they were dripping blood from a recent kill. Like the first day they sensed the walkers who were returning, but a good 5-7 minutes before we could see them from the rover.

So we raced away from the dogs that were hightailing away from man on foot, retrieved the walkers then sped back so they could get a glimpse of the dogs before they had totally disappeared into the bush.

Even in my earliest days Africa had long been jostled out of natural balance. But today it is extremely disjointed, and the only way to get a sense of what pristine nature was and what portions of it might be sustainable is to enter it as invisibly as possible. In African game parks, that’s in a car. As strange as it may seem, the car is a benign addition to their current universe. Man on foot as has always been the case is a threat.

And with the increased tensions and disturbances of the modern world, animals react no differently than men. North Korea sends up a rocket, and some lonesome marine’s finger tightens over the button.