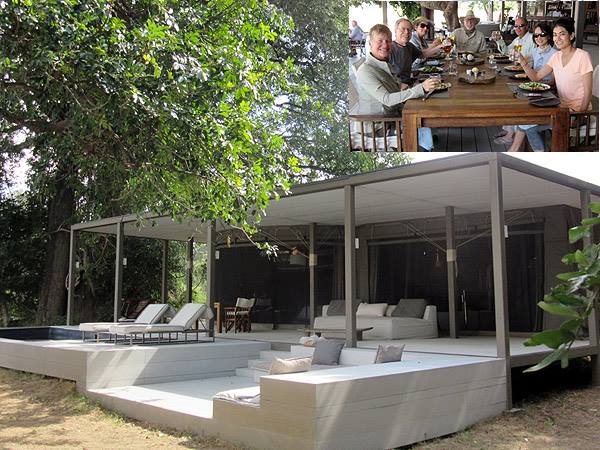 The middle of sub-Saharan Africa, about a million square miles, includes the “sand river” big game wildlife parks. We’ve just finished 16 days exploring these less visited areas, and we had a ball and some incredible successes game viewing.

This entire swath of Africa, roughly from mid-Tanzania south to the Zambezi River, is mostly vast, sandy scrubland that reminds many Americans of the midveld near the “Four Corners” where Colorado, Arizona, Utah and New Mexico meet. The big difference with Four Corners and this area is its namesake, the great sand rivers that drain so much of the continent.

Here’s a quick summary of our trip:

Our game viewing began in The Selous. Hardly 80 air miles from the coast it isn’t as high and is much more jungly than the other wilderness areas. Game viewing concentrated on the great Rufiji River, one of the two that weaves through the massive 20,000-square miles.

We saw lots and lots of crocs and hippos. When we moved inland from the river on a game drive we encountered the terrestrial mainstay of our entire trip, the impala. This gorgeous antelope is a browser and feeds on the scrub which defines the entire area. We also saw many waterbuck, some bushbuck and buffalo.

We then flew deep into the interior to Ruaha National Park. Here’s where we had our best game viewing, including a first game drive that encountered a young male leopard on his recently killed impala! This is also where we saw our first lion and encountered the rare lesser kudu, as well as the more common greater kudu.

We also saw lots of baboon, and really a lot of giraffe. Also encountered some elephant (more about them below), zebra and Grant’s gazelle and everywhere as always, the impala. Night game drives routinely encountered civet and sometimes, hyaena.

In both Ruaha and Zambia’s South Luangwa, which followed, night game drives gave us some real drama as we followed leopard kills. Didn’t see the takedown, but they were exciting times!

Our last week was in South Luangwa National Park in Zambia at two different locations. Here’s where those who weren’t walking had fabulous encounters with wild dog, one of the most precious sightings in Africa, today. (Take a look at yesterday’s blog.)

Once again hippo and croc dominated game viewing, because like The Selous Luangwa is defined by its massive river. We saw our sixth leopard here! That’s absolutely one of my most important memories.

Many safaris never see a leopard. Unlike wild dog, they’re not endangered. They’re doing well, but they are reclusive, mostly nocturnal cats. It’s dangerous to draw too many conclusions from any wild experience, precisely because it’s wild! Expectations come from predictability, which the wild has a pernicious way of making difficult if not impossible.

But I do have a theory. The numbers of impala we encountered were enormous. Impala have always had a primary role in almost all of sub-Saharan wildernesses, but I just don’t remember them in the numbers we saw this time.

Leopard’s main prey is impala. That’s the possible connection. Now why there are so many impala – well, I’ve got some preliminary ideas but it’s going to have to wait until I have strong enough wifi to corroborate this notion with others’ observations.

The other lasting memory isn’t so joyful. There were many fewer elephants. Those we saw had very small tusks and in many cases, no tusks at all. We saw no ele in The Selous, some in Ruaha and the largest number in Luangwa.

Everything else in this large area met or (as with leopard) exceeded my expectations, corroborated my memories. I know that in northern Tanzania there are two many elephant. Well, not so here.

Our experience corroborates many claims of a dangerous decline in elephant populations, but I want to re-enforce the point that this is not continent-wide. But it seems true in the sand rivers wilderness areas.

I’m now heading home and will return to Kenya and Tanzania in a few weeks. Stay tuned!