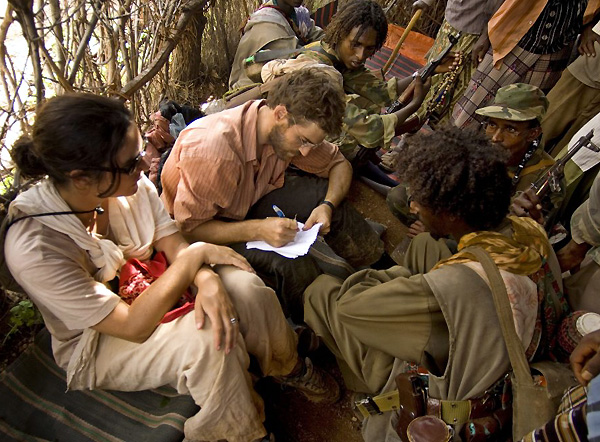 Yesterday I returned from 50 days on safari, fifty days of not talking politics, pointing out mistakes, lies and misrepresentations that we’re drowning in. All I wrote about was the leopard in the tree and the wild dog nipping the hyaena and the massive Luangwa flowing into the sunset. I felt guilty. It wasn’t easy.

So anxiously I’m about to read Jeffrey Gettleman’s new book, “Love, Africa.” I want him to tell me why it’s OK to talk about game viewing when Trump is about to blow up the world.

No American journalist has been a greater source for my understandings of contemporary Africa than Jeffrey Gettleman. Pulitzer Prize winner, adventurer extraordinaire, he was given a pretty loose leash by the New York Times to report in Africa whatever he wanted to during the last ten years.

Only yesterday while flying through Paris did I reach strong enough wifi to download his new book, “Love, Africa.” But I was able to read reviews and listen to an excerpt on Boston Public Radio. This short blog is therefore seriously qualified: I haven’t yet read the book.

But I just got home and want you to understand how someone who spends a lot of time other than at home yearns for those who are able to articulate the magnetism of being and living elsewhere without wholly throwing away your origins.

Gettleman seemed to me to the perfect one. Although he’s more than 20 years my junior, he grew up in Chicago as I partially did, has a Midwest naivete that presages genuine openness and most importantly of all, was a godsend to those of us seeking insightful African news.

That’s almost unheard of. Americans interest in Africa is somewhere just below their interest in organic foods. There’s a very small obsessed group who will relocate to Portland to avoid grapefruit washed in other than rain water, a larger and growing group who understands its importance but only rarely has a schedule that allows them to drive a mile further than Wallmart to a fruit stand, perhaps the majority who concedes organic is better for your health, and an undeniably large plurality who still doesn’t know what organic means.

Gettleman was our savior. He arrived Africa just as Kenya was imploding: The favorite of the West was turning against them with uncivility and Bronx cheering decades of democratic pressures. He meticulously unknotted the complexities of Somalia and berated America for pretending to not be involved, there.

He so brilliantly uncovered the source of funding for the Congolese warlords that his reporting was used to reenforce parts of the Dodd-Frank Act that suppressed the wars there while at the same time shining light on its contribution to elephant poaching.

All the while it was straight-forward, unemotional reporting.

His book seems anything but.

“I held that same vague patchwork of images in my head that many people hold, of suffering, disease, deprivation, and poverty. That part of Africa is real—but it’s only that, part of the picture,” he writes.

He also gets very personal. He talks about his love affairs in almost graphic detail, bares to the world his tiffs with his wife-companion (a video artist) and refers with glib, almost elitist casualness to his school buddies that seemed to propel him to Africa like a fraternity rush.

Remember, I’m only talking about an excerpt, but the things that pique me are also so very American that they could be encouraging reasons this man can really be our interpreter.

“This was a different world. Personal space didn’t exist. Grown men walked down the beach holding hands, and once when I was standing in the middle of a pack of fishermen, I felt a set of rough calloused fingers interlace in mine. I liked that. I squeezed back. It made me think that maybe out here, you didn’t have to move through life hopelessly alone.”

A paragraph like that belies American’s incapacity to understand the vast majority of the world’s men-to-men relationships. Grown men don’t only hold hands on a romantic beach. They hold hands walking into the UN Security Council to discuss sanctions against North Korea and while taking their seats at a soccer match in Dubai.

“Even though we were constantly aware that we had so much more than the people around us—our Nikes, our flashlights, our Walkmans, money—even though we were surrounded by people who were clearly struggling, I rarely sensed any resentment, any bitterness.”

This paragraph worries me the most. It’s what westerners would like to believe about the people they’ve repressed and it’s wholly wrong and delusional.

The best of journalists often find themselves stuck in the struggle to define themselves as observers rather than thinkers:

“…because dreams lose their power if you start sharing them around,” is however exactly what he’s done with this book. Will he tell me why? Stay tuned. I’ll let you know when I finish it.