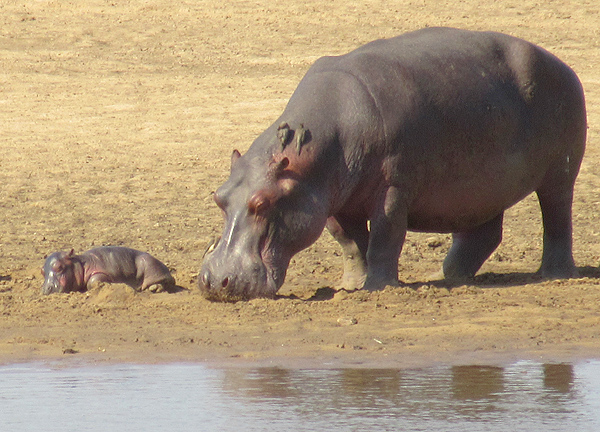 The rains north of the Zambezi were good and normal as they had been the year before. So the wild highveld of the valley was saved from the devastating drought just south. There was nothing unusual that the great Luangwa was slowly drying up, pulling in from its sometimes third-mile wide caked sand banks. This was normal. It was the solstice. Winter was here and all was still well.

The cloudless, mostly windless vistas of the valley seemed to expand as the river shrunk. The landscapes of the Luangwa Valley are massive, reminding me of the vast Serengeti plains in an odd way because here the river dominates everything, not the plains.

But it’s such a large sand river, twisting and turning through flatlands for hundreds of miles that like on the Serengeti you’re constantly anxious that something important is going on just beyond the periphery of your experience.

As winter and dry sets in, the tension grows palpable. Tens of thousands of hippos and crocs crowd together. They’re healthy and robust, but now they have to share. The river grows smaller; the night grows longer. More time for the leopard to hunt, for the hyaena to prowl.

We’d just arrived our first camp. We cleaned up and sat in a half circle on the river bank enjoying afternoon tea and peanut butter brownies when someone noticed a croc with something pinkish in its mouth. It was a baby hippo.

It had been born a couple days before we arrived. Hippo birth in the water but in this stressful time the normal behavior of keeping the baby in the water away from other hippo for two weeks wasn’t possible. Shortly after birth the mother nudged the reluctant baby out of the water onto the sand bank.

Other hippos came around to view the novelty, but the mother kept them all at bay. Normally two weeks in the water allows the baby’s muscles to fully extend and exercise. Now she could hardly move. She just lie seemingly lifeless on the sand.

The day ended with a brilliant pink-orange sun setting behind the tall mahogany and rain trees, draping their shadows over the hippos then all the way across the river onto our camp. Before she delivered mom would now begin her night of eating.

Other hippos left the water and traveled 10 or more miles to where there was still abundant grass. Closer to the river the veld had already been denuded of its grass. In fact warthog were already digging for the roots and other grass eaters like buffalo and wildebeest had long disappeared into the interior.

But mother hippo remained behind all night long. At less than 120 pounds the newborn baby was the perfect meal for leopard. We’d already seen three leopard and they were all wonderfully healthy and fat. Their normal prey from the thousands and thousands of impala in the area required stealth and quickness to avoid a puncture from the harem master’s sharp horns. A baby hippo was the ultimate filet.

Night was a challenge for the baby. The water temperature was constant, never below 65 or 66 degrees. On the bank under a moonless night sparkling with the milky way temperatures dropped into the lower fifties. The baby’s skin, already somewhat desiccated, tightened even more.

The sun rose on the second day lifting enough thick mist from the river that the baby instinctively stirred trying to roll back into the river, but the mother refused, nudging it back onto shore.

Warm sunlight tucked under the mist. As the slim fog dissipated yellow bumps appeared in a semi-circle just in the river hardly two meters from the hippos. Ten and twelve-foot monsters lay further down the bank, silently and unmoving.

All day long the mother stayed by her baby. The baby tried to stand up several times as strength fought fatigue and hunger. The mother hippo can’t nurse a baby on land. Finally as the beautifully sunny and warm second day started to come to an end, the mother hippo moved into the water.

An 8-foot croc moved in and dragged the baby away effortlessly.

The mother turned back and raced to the shore, splashing water high into the air, but she couldn’t achieve the speed of the croc pulling the baby away.

Never releasing its clamped jaws, the croc floated always a safe distance away from the mother, submerging with the baby from time to time. Croc need to hasten the rotting of the meat before they can spin off a piece.

The mother hippo floated nearby. Her frantic attempts to save the baby were reduced simply to the vigil of watching the croc with her dead baby in its jaws.

The big croc finally started actively spinning the little carcass, hopeful that a day in the water was sufficient for the meat to have softened. The mother hippo which had remained about 35 meters away moved towards the croc slowly.

With every neuron in his tiny arsenal dedicated to spinning the hippo, the croc seemed unaware that the mother hippo was moving in.

Our game drive was put on hold.

She inched closer and closer. There wasn’t a ripple in the water. The croc simply didn’t seem to notice.

Finally she was right beside her dead baby and the crock! She opened her massive mouth and chomped the side of the despicable reptile! Her huge head, probably a third as wide as the length of the croc, pushed everything underwater. Huge bubbles splashed around the both sides of her forehead and ears, which was now all that was visible.

We waited and snapped a thousand photos. We wondered if the bubbles were from the croc drowning or the mother’s own excitement.

Then, at least 35 meters away the croc surfaced. Parts of the baby hippo were still clamped in its massive jaws. We ditched our game drive and just watched the river.

The light dimmed and the hadada screamed. The sun set beneath a thin wisp of purple cloud and the dark evening mist catching the final bits of daylight grew out of the river like white foam under the darkening sky. Baboon began arguing as they scurried up into the safety of the trees, and the deep boom-booms and guffaws of hippo from up and down the river slowly took over the night. Last we could see, the croc was spinning and the mother was gone. was gone.