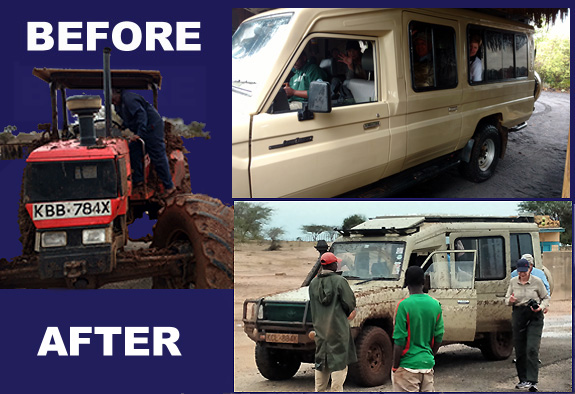 If we left Saturday morning as planned and drove to our next destination, there was no doubt we’d get stuck. If we flew out we’d miss our next game park, Amboseli, because there were no connections that would work.

The rains have pummeled Kenya. Though heavy rains aren’t so unusual they don’t arrive with this intensity before mid-April. And remarkably we arrived our first lodge in dust and heat with the staff bemoaning there hadn’t been a drop of moisture since December 6. The next day we woke up to dripping ceilings and in 24 hours Oldonyo had received almost a fifth of its entire annual rainfall.

I hired a tractor to precede us. We had 27k of iffy track before we arrived at roads that were good enough to take us to our next destination, Amboseli National Park.

We started at 9 a.m. and my folks were nervous. Later Paula would say that she was gripping the handrails the whole time!

My driver James was outstanding. We almost did one 180 but we slid and slipped constantly as he maneuvered the tires and clicked through gears to basically keep a Toyota Landcruiser swimming through mud.

Almost 50 minutes into the unending grinding and twisting and throwing, with mud almost covering entirely our windows, the cruiser stopped dead, sunk almost to the floorboard in mud.

It took some combined efforts, but the tractor then pulled us out. There was celebration as if we’d seen a lion kill! It took nearly an hour and half.

So we sailed into Amboseli and saw some magnificent stuff, including the park’s trademark elephants by the dozens if not hundreds. That was before lunch. As I checked everyone in for lunch, the head receptionist took me aside and said quietly, “You won’t be able to get out of here. The bridge to Namanga is flooded over.”

Our plan was to spend two days in Amboseli, which is on the Tanzanian border, then drive into Tanzania. But apparently not. The so important Namanga bridge had done its work for decades. It’s how all the tourists and supplies get into and out of Amboseli. Now, it was flooded.

I sent the group off on an afternoon game drive alone and organized flying out of the park the next morning, then flying all the way to Tanzania. We had no choice. That’s what we did, and as I write this, we’re in Arusha, Tanzania, preparing this afternoon to continue to the Serengeti.

Meteorologists apparently understand what’s happening. It’s the unfortunate confluence of the worst parts of the Madden-Julien Oscillation (MJO) with a series of unprecedented cyclones. In laymen terms that means a normal equatorial cyclical weather phenomenon, the east moving MJO, collides with the very abnormal arrival of a southern hemisphere hurricane.

Essentially this is climate change at its most hurtful. East Africa has never experienced the force of a hurricane until last year’s Ava. It’s now had two, and a third is right now threatening Madagascar. Hurricanes are our best examples of global warming.

As destructive as the recent hurricanes and severe weather have been to the U.S., an American simply can’t phantom how terrible it is to the people in a developing country. Farmers may lose years of careful crop and tilling investments. The few necessary roads are destroyed. Fragile electrical grids are laid to waste much more severely than in Puerto Rico.

There is no FEMA, not even a poorly implemented FEMA. There is nothing to help.

Ultimately the kind of refugee situation we currently suffer in the Mideast will develop in Africa. Then perhaps the poorer parts of southern Asia. It baffles me completely that there is anyone anywhere in the world who doesn’t see the urgency of dealing with this global warming.