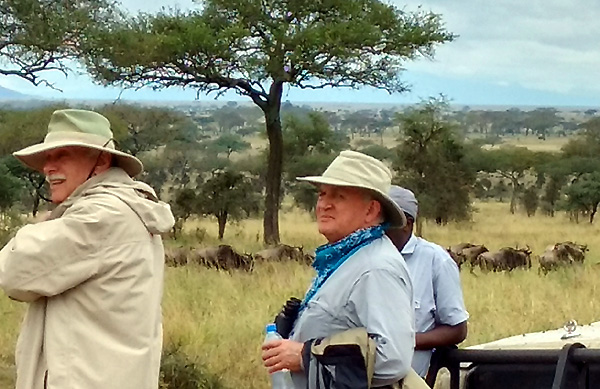 Monday we flew into the southern Serengeti over Ngorongoro Crater then south of Olduvai Gorge. There should have been tens of thousands of animals. There weren’t. Much of the area was dry as a bone. It shouldn’t have been.

February was the driest on record since Ndutu Lodge began carefully measuring rain in the southern Serengeti in 1981, less than 2″. That’s crazy. A “normal” February had twice that.

No one needs to be reminded that weather today is disruptive and unpredictable. Animals go where there’s food, and food grows with rain. For the first 30 years of my career year, you knew where most everything would be at each different time of the year. Things are different, now.

My long-time trusted driver/guide, Tumaini, had talked with many people before we arrived. No one seemed to have any good information. “Herdtracker,” a website claiming to keep tabs on the big herd whereabouts, claimed large herds were at Seronera moving to Sopa, but Mr. T’s intel didn’t confirm that.

The point is that when you’re talking about nearly two million animals, there’s always more than a single herd. There’s usually at least three large groups and sometimes as many as five or six. More than not in my career, no one could tell you where all of them were at any one time. But usually someone could tell you where some of them were at any time!

My inclination was to go out on a very long all day game drive from our southwestern edge of the park into the Moru Kopjes near the center. So I got David, Paula, Mike and Joan together and offered them two options: more time to enjoy our camp and go out on two shorter drives in the area, or spend the entire day in the adjacent Moru Kopjes for its beauty and history.

When they asked what I would do I honestly replied that for 45 years I’ve never stopped going as far as I could. I’m not sure that swayed them but they decided to spend the entire day in the Moru. Boy, was that a good decision!

We woke to drizzle. It was also cold, in the 60s, and the day just didn’t look promising at all.

After a wonderful breakfast we sloshed out of camp and started what would end up being nine hours of slipping, sliding, twisting and almost but never getting stuck. We kept the pop-top roof down because of the rain, and because I wanted to go fast at first to get through a heavy section of tse-tse.

We “swam” the thick bushland near the airstrip onto a great plain that like a donut cut out of the Kusini/Moru forests gave us a full view of the sky. It wasn’t at all encouraging: deep low heavy grey clouds with strips of dark blue above them.

This “donut” also sinks in the middle (black cotton soil), so we knew the going would be difficult. Hardly an hour out of camp we nearly got stuck! But Mr. T’s driving was exceptional and we only got rattled!

As we approached the big first Moru kopjes which overlooks the Naabi Plains we got our first wonderful surprise: thousands of wilde, and they seemed to be coming out of the corridor/canyon behind the Moru. What a sight! It was even more exciting because it was such a surprise!

They were literally shoulder to shoulder coming out of the narrow canyon corridor, and once they hit the plane most of them would kick their hind legs in the area, tilt their oversize head and bend their body then start running wildly!

There wasn’t another car anywhere in sight, and we hadn’t seen one in hours. There were probably upwards of 3-4,000 tourists in the Serengeti/Ngorongoro. Were we 5 the only ones to see the migration?

We stayed among the herds for some time, took a short track diversion into them before continuing north. Heavy bush and the canyon kept us away from the migrating herds, but every once in a while there would be a slit in the terrain or forests and we saw the continuing dense movements of thousands of wilde south.

The Moru is in my estimation the prettiest part of the Serengeti. The main feature are the Kopjes. These are giant granite boulders uplifted from the beginning of time, dressed in patches of cactus and tree bush, girdled at the base with thicker bush then surrounded by massive grasslands. They pepper this rolling almost hilly landscape in such stark contrast to the great flat plains just to their east and south.

At Lake Magadi we took the Sopa road west and then right after the second bridge headed back south trying to circumscribe the herd we had been paralleling. Sure enough, the empty bush started to be dotted with the dark brown of these amazing, weird creatures, the gnu, the wildebeest.

We went as deep into them as we could before the spongy black cotton soil stopped us. But we had seen both ends of this amazing herd, a migrating mass of animals that was about 10 miles long.

We set out a wonderful lunch under an old yellow-barked acacia, then headed back. The sun was trying to come out, the day much warmer and the roads already much better. When we got back to where we first saw the herd, there were twice as many flooding onto the great plains. We had actually cast our eyes over about 30,000 wilde, and I imagine the whole herd – mostly obscure in the canyon – pushed a quarter million.

There was, of course, much more to our game drive than just the migration. My clients saw for the first time steinbok, klipspringer, rock hyrax, Cooke’s hartebeest, reedbuck and in the far, far distance, a black rhino! We also saw hundreds of impala, maybe thousands of gazelle, and tons of wonderful birds.

But catching the migrating herds is the treasure of a Serengeti safari. It’s the last great animal migration on earth and the most spectacular wildlife experience anyone can have!

And how’d we achieve it? Not a single ranger, no pretentious website or other visitor or guide had told us what to do. It was what every good safari has: a mixture of ambitious perseverance, dumb luck and a measure of intuition.

We’ll be in the Serengeti for another four days! Stay tuned!