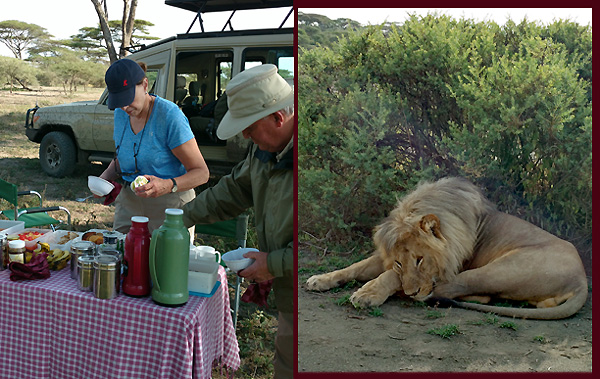 We left before dawn in search of leopard. Most safaris do find a leopard but not all, and together with the rhino it’s very difficult to find. Tomorrow when we head to the crater to end the safari, we’ll exhaust our chances. There are no leopard in the crater.

There were spits of rain, but the sunrise seemed to push the clouds away. It seems to be very wet all around us, but right here it’s still very dry. Many animals have left. No one had seen a leopard for days.

When you look for something really hard, it seems you’ll never find it. We looked for it really hard. Both Tumaini and I examined every tree for that telltale hanging tail. Leopard live mostly in trees. They bring their kill into trees, raise their cubs in trees, and hide marvelously in trees. But they can’t control that hanging tail.

An hour into daylight we’d had no success whatever. Not only no tales, but no scat of any kind. Leopard don’t migrate. They don’t vacate their homes when the weather stresses them, but they do sort of hunker down. I think of them as sleeping through hunger.

And, in fact, we hadn’t seen any of their prey. Usually there are hundreds of impala in the Ndutu area, and plenty of baboon. We’d seen neither. Both of those animals will move away from overly dry areas, particularly when the wet areas are so nearby.

Then the radio rattled with extraordinary excitement. It wasn’t leopard, but two lions in a fight with a hyaena.

The shortcut to where the action was required that we skim over a very wet area of the edge of the forest. T drove marvelously once again, and we were all quite experienced with slipping and sliding all over the place. But it delayed us slightly and we got to the area after the main event was over.

The hyaena was standing still lilting back and forth. Its face on both sides had deep scratch marks. Its eyes were closed. The entire left side of its body was clawed to pieces, with hunks of skin flapping down. When it opened its mouth, you could see the tongue flooded in blood.

It was a horrible sight to see. Hyaena and lion detest one another (contrary to Lion King). But a lion is so much more powerful than a hyaena the question was why the hyaena wasn’t dead. Why hadn’t the lion dispatched it?

Apparently the hyaena wandered into the two male lion who were sleeping off a day’s old kill. It was a mistake, so to speak, but hyaena are fearless. They make lots of mistakes. Their senses are acute and they’re hard wired to follow lion, but apparently in this case it didn’t know the lion were right there.

Little can rouse a lion sleeping with a full belly. I’ve seen a string of wildebeest running ten feet away and one fat and sassy lion hardly blinked, it simply turned over to avoid the dust.

But hyaena is another story. For some reason they detest these hangers-on. So the one male lion awoke and jumped on the hyaena.

What we determined later was that the hyaena landed a rather serious bite into the lion’s neck. The bite of a hyaena is the most powerful of all African creatures. Had it clamped around the lion’s leg, it would have immediately crushed it to pieces.

Had the bite landed deeper into the neck, the lion would be dead. Even so the bite was enough to get the lion to drop the hyaena, and it immediately ran away while the lion took stock of its wound.

We stayed in the area for a while, and the hyaena seemed to recover its balance. It finally began to walk. Our car was right beside it. It started to walk directly back into the two lions!

When the lion saw it again, they gave chase. Normally a hyaena could easily outrun a lion, but this one was almost dead. The lion with the bloody neck wound got to the hyaena first, but it was awfully cautious! It simply pawed the torn flank of the hyaena. That nearly dead creature whipped around with a sort of death growl and it gave the lion pause.

Then the hyaena mustered some internal strength and ran fast. It was amazing to think that animal, so bloodied and cut up, could run so fast.

The lion just watched it go. It wasn’t going to chance any more fighting.

If any other hyaena find the one the lion had torn to pieces, they’ll destroy it and eat it. The only hope for that creature was to find a secluded pool of water somewhere, lie down and hope its body can come back together.

We continued our leopard search. We stopped to set up a beautiful picnic breakfast under the shade of a lovely tortilis acacia. Then slowly we continued the leopard search and headed back to the lodge. We found no leopard, but by the end of the day four more lion.

But for the life of me, I never thought I’d be rooting for a hyaena to survive. But that creature’s life-staying power is amazing. Two lion against one hyaena and that amazing, fearless if horrible creature still survives.