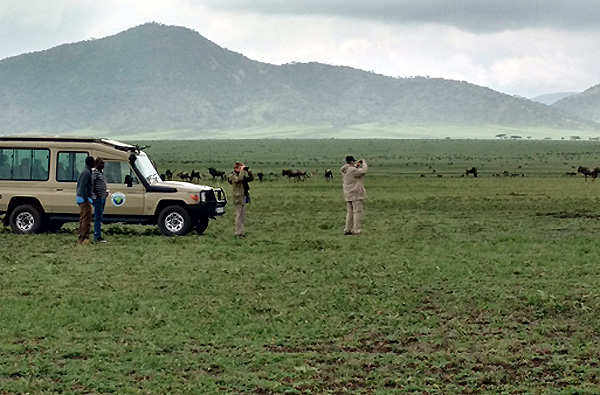 How many people? About 6 nomadic Maasai. How many wildebeest, zebra, eland, gazelle, ostrich, hyaena and jackal? I can’t be sure. Maybe a million. Maybe a million and a half.

Everyone including us was looking for the migration in the west and southwest sides of the Serengeti. Rightly so, because that’s where they normally are. If you read my blog several days ago, you’ll remember that we found many wildebeest and zebra there.

But that find paled in comparison to what we saw today on the eastern side.

We had a hint of what we would see early on as we pulled out of the Ndutu forest onto the southern Naabi plains. It was suddenly beautifully green. Ndutu is still dry and dusty.

We hadn’t traveled long before we spotted a file of migrating wildebeest. They were mostly running fast, occasionally kicking up the hind legs and twisting and dancing about without really changing their fast march eastwards. East was the key, I guess. They knew new grass was over there.

We couldn’t tell how long that first file was because after about six miles into the distance the terrain slipped down a ridge. So that one file of wilde was at least six miles long.

We stopped at the main road intersection to take pictures under the welcome Serengeti sign. Then we headed off-road into the horizon, and the horizon was never not filled with wilde.

I’d brought Justin and an extra Landcruiser up to Ndutu to accompany us today just for added security. If we broke down we’d likely be out of any communication with anybody.

Rain threatened us all day, but only actually fell on us for about 15 minutes. Several times we got out of the car just to wander a bit over the massive veld, nothing but green grass and wildebeest and other animals around us for miles and miles as we drove north past the Gol Mountains then cut down southeast onto the Lemuta Plains.

Thunder burst from a storm in the west, rumble over us then echo back when it hit the distant Vulturine Mountains. That was a distance of at least 30 miles.

When we came upon three bloody hyaena that had just taken down a wildebeest, they ran off. Clearly they’d never seen a car.

Sometimes when we stopped and turned off the engines, the rumbling thunder and cold wind sounding around our hats and ears would give way for the crazy blarting of those wildebeest. Sort of like a poorly tuned set of tubas hitting low notes then high notes, a musician would hardly call it melodic. But to me it’s the choir celebrating infinite creation and freedom.

We finally reached the Shifting Sands and after exploring this odd hill that moves on its own over the Serengeti, we drove to another hill and set out lunch. For 360 degrees there was untold beauty.

This was the southern edge of the migration. Here were also herds of sheep with Maasai herders. One young woman walked across the veld to ask us if we wanted her picture. We traded our leftover lunches for pictures. She had two children, one of them very tiny. I don’t speak Maasai, but Tumaini does. He asked her how old she was. She didn’t know.

We watched the three of them walk down the hill back to their herds of sheep. It took almost 20 minutes.

Then we visited the exciting new museum at Olduvai Gorge. Pretty impressive. How absolutely fitting it was for me to show my clients some of the story of the remarkable evolution of man, at the end of a day spent in a wilderness unshackled by all the failures of our modern, tangled society, today.

(The new museum opened in October and is so much of an improvement over what existed before.)

As we sailed around the alter-crater of Ngorongoro heading to our lodge, David remarked that the day was the highlight of the whole trip.

I can’t disagree. I have dramatic memories of dozens if not hundreds of scenes of the migration, but there was something deeply colorful and intimate today. Perhaps it was the skies thick with storms, the terrible rumbling thunder or the moments of thousands of Thomson’s gazelle kicking away from us.

Perhaps it was the near 50 ostrich that almost surrounded us, or the two dozen giant eland that leapt into the air as we approached them.

Perhaps it was just the solitude. Only our vehicle and Justin’s chase in case we broke down. We didn’t, but I’m not sure any of us would have minded if we had.