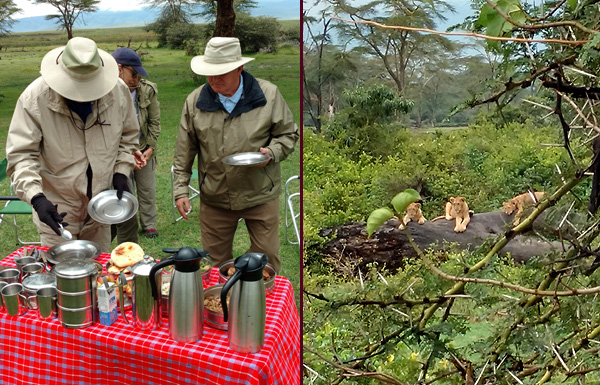 Our 15-day journey through Kenya and Tanzania ended at Ngorongoro Crater, one of the most majestic landmarks earth has to show. Although it rained a little and was ominously overcast, the game viewing was good.

We saw about 20 lion, many elephant, lots of antelope though no big herds, plenty of hyaena and a bunch of other stuff, including the serval. That’s not a rare cat, but it’s very rare to see it.

The safari – we thought – was essentially over. We’d spent a good portion of the day traveling through the crater’s lush green plains, sneaking onto tiny roads that took us to marvelous hippo pools (where for the life of me I thought I saw a pair of mergansers, but there aren’t mergansers here!).

We searched for any of the giant big tuskers that might remain from the time they took sanctuary from the horrible 1980s’ poaching, and we saw three lovely black rhino, piled on one another like exhausted teenagers watching TV.

And, of course, we saw around 20 of the crater’s enormous lion population. The crater probably still has the highest density of lion in Africa, specifically because they have to collapse their normal territories in order to enjoy this cornucopia of wildlife. Normally lion prides are pretty strict on 10 sq. mile territories, but here it’s significantly reduced.

All the lion we saw in crater – unlike in the Serengeti and elsewhere – were comatose, sleeping off kills. No hyaena/lion fights or recent kills. They were all fat and sassy, including the family we literally “ran into” while traversing the crater’s last forest.

It’s kind of sad for me to go through this remaining forest, because I remember it so thick and expansive years ago. But the increasing elephant population has systematically destroyed it. No small trees are left, and so as a first impression it’s quite grand:

Some of the massive yellow-barked acacia tower 60-70 feet in the air. There are still quite a few of them, and their understory was thick with all sorts of bushy plants, like the moonflower and wild eggplant and many more substantial ones like rhino rib. This forest is where we often find the big tuskers, and that’s what we were looking for.

Instead, we ran into a family of lion! Not sure exactly what they were doing here, but their bellies were full, including the three juveniles we watched playing on a fallen tree.

So I think it fair to say everyone was quite satisfied. Tumaini and I set out our final lunch in a beautiful grove not far from the crater’s main sweetwater lake. Paula had a chicken bone ripped from her fingers by a marauding black kite, but other than that it was a wonderful and relaxing time before we headed back to the lodge for our last night.

So we headed back to the lodge for our last night. Slightly interruption.

The largest of the crater lion prides is known as the Big Tree Pride. Suddenly they were spread all over and around us, on either side of the road. They, too, were fat and sassy with full bellies, and many were obscured in the growing grass, so I couldn’t get a new count on exactly how many.

But as we surveyed them with increasing amazement, one of the best sightings on safari sprung into few not more than 30 meters from us.

It was a serval cat. These are gorgeous predators, spotted somewhat like a leopard with a short tail and constantly twitching big ears, and very small: never more than 20 pounds or about the size of a very large house cat.

The poor serval started by tiptoeing through the field, its eyes shooting back and forth, obviously awaken from its daytime rest by the crater’s biggest pride of lion! Shortly after tiptoeing, it then started to cantor and finally run, but it was never sure where to go, since there were lion everywhere!

It finally found a path away from the pride and disappeared. What a marvelous end to this grand safari!

My clients celebrated the last night with a special evening dance presentation by a local group trying to sustain interest and understandings of traditional Maasai dance. It was wonderful. And Crater Lodge staff set out a wonderful early evening hors d’oeuvres and “bitings” table and arranged the presentation on a cliff overlooking the magnificent crater!

I’m now back in Nairobi, waiting for my next group.