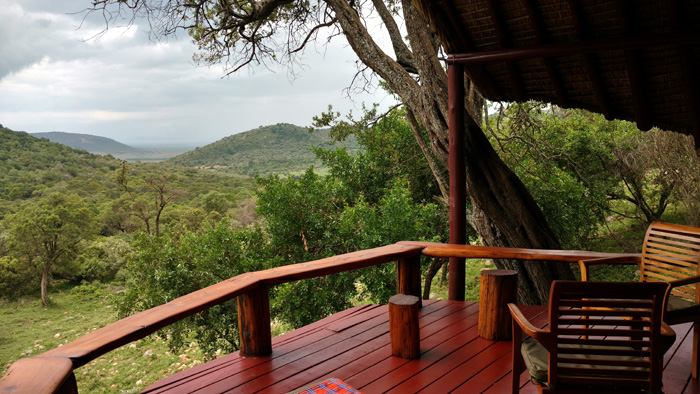 What goes around comes around. My private deck, in my private villa, in a hidden valley along the Mara River is only a few miles but more than 40 years away from where EWT began its first safaris in 1976.

Reheated “safari soup,” cold chicken legs and warm wine that’s gone off is replaced with gourmet minestrone, perfectly seasoned beef wellington and the finest South African cab. The grit and cold water, long-drop toilets and hard spring beds have been replaced with comfort and elegance the likes of which you could also find in Tuscany, the Belem coast, Milford Sound or outside Yellowstone.

That hasn’t changed. I began my safaris in Kenya’s Mara because of the animals. There didn’t seem to be any wilder, more free-range wilderness on earth. Driving into this elegant Saruni Mara from the Mara North Conservancy airstrip, we passed many hundreds of wildebeest, topi, gazelle, zebra and lots more animals.

At our picnic lunch stop along the raging Mara River I spotted 23 species of exotic birds oblivious to the dozen hippo snorting or the creepy stillness of the crocs at river’s edge.

You don’t have that in Tuscany, the Belem coast, Milford Sound or outside Yellowstone.

Things have changed, of course. The nomadic Maasai villages are now tidy little farm towns linked by electrical power lines. Morani, the old warriors, are nowhere to be seen. Instead, children in colorful sweaters (it’s pretty cold at the moment) file in and out of school rooms.

The cattle look much more robust. You don’t see as many ribs as before. Locals complain bitterly about the roads, but believe me, they’re much better than they were.

Instead of many small herds of cattle spotting the landscape hither and yon there are huge herds or both beef cattle and sheep. They aren’t being gathered to buy wives like before. Their blood isn’t used as food. A cow fetches $500 from Nairobi’s insatiable abattoirs; a sheep for $50. Together with tourism this is the livelihood of these people, now.

I’m pretty critical of what too many people too quickly call ecotourism, but what is happening just to the north of Kenya’s Mara Game Reserve is community tourism at its finest.

I’m staying at Saruni Mara in the Mara North Conservancy, a local cooperative of 74,000 acres with a dozen lodges and camps spaced so far apart with so few vehicles that you always feel that you are the only ones here.

That enormous area is almost tripled in size by two other contiguous local cooperatives that share communal access, meaning its total area is just a tad bit smaller than the Mara Game Reserve itself.

At any given time there will never be more than about 1 tourist per every 500 acres in these private reserves. Compare that to the actual Mara itself, where in the high season the density is ten times greater.

So that’s the challenge, today, for safari agents and the conundrum for their clients. The actual Mara game reserve, like Kruger National Park for instance in South Africa, has a much greater biodiversity and often a greater concentration of animals.

Predators, for instance, are few and far between out here in the private reserves. Although the conservancies are now successfully enforcing grids that are keeping domestic stock out of certain portions of the reserve, this is a living ecosystem with farming and ranching Maasai. The Mara Game Reserve allows no domestic stock or any kind of human activity other than game viewing.

Private reserves are usually much more expensive: their properties designed for the upmarket that wants exclusivity.

But discerning travelers, and especially veterans, long for the exclusivity that in itself recreates a wildness you just can’t muster inside the government reserve when 50 cars are lined up along the Mara River waiting for the wildebeest to cross.

From a Kenyan’s point of view, there’s no contest. The owners of these cooperatives get a regular income from the hoteliers leasing their land. The staff for all the properties is almost all local. Numerous cooperative programs from educational scholarships to training programs are included in each property contract.

There’s simply no question that the direct benefit to a local Kenyan in the area is substantial.

But for you tourist? Which do you prefer? Being one of a dozen cars watching lions on a kill, or a single car spreading out a herd of 200 zebra as you drive seemingly aimlessly through beautiful country … all alone?