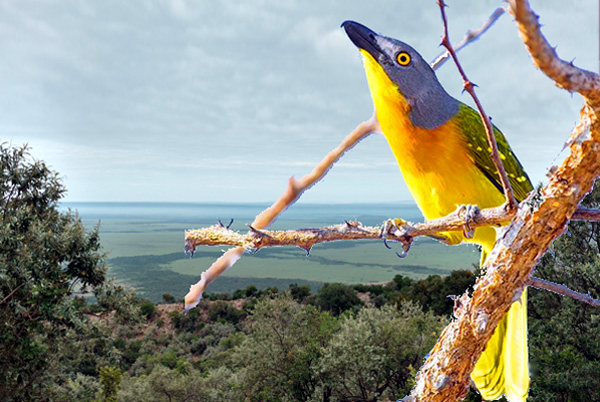 Ole Kisemei took me to the highest point in the Mara this morning, Kileleoni. The view was magnificent, but what we saw going up and down was even better.

It was still early morning and the heavy cotton mists on the plains obscured the far away horizon over the great plains. But we had to come up in the morning, because the thunder and lightning and heavy rains are descending on this area every afternoon.

Still from 6600′ above the plains I could see a lot. I followed the Mara River north to south as if scanning down the narrow head of a mamba over its engorged body. Dozens of strings of forests etched out of the grassy plain – some thick, some thin – revealed the many streams and rivers seeping out of this verdant land. Each contributed a bit more water until as I saw yesterday the great Mara raged and bubbled over hippos and splashed docile crocs trying to rest on its bank as it charged its way into the mother lake, Victoria.

The river was guarded on its western side by the impressive Olololo escarpment that from my distance looked like a series of stairs to heaven.

East of river in between the streaks of forests was the Mara lawn – I don’t know how else to put it. It looked like the biggest golf course on earth. Only you wouldn’t want to hit the links here.

There were so many wildebeest, zebra, impala, Thomson and Grant’s gazelle – even eland, not to mention the many fluffy herds of sheep and colorful cattle. It looked like a rodeo forming itself.

Ole Kisemei was not pleased that I was spending so much time with my binoculars, so he took my camera and clicked the pictures. He does it much better than I do, anyway.

But the drive to the top was so enchanting. There was a track that often disappeared, but Ole Kisemei drives the old Defender like a pro. We eased through clumps of wild camphor and really thick croton trees covered with gorgeous white and green lichen.

It was hard to believe some of the larger croton were still alive. Their trunks were cleaved, often hollow, twisted and gnarled like a plastic sculpture tortured in an oven. Elephant had recently been through, too, so that didn’t help the landscape. Branches were torn off and laid everywhere.

Then we arrived at a narrow band of altitude perfect for wild olive, and the trees were magnificent. I knew the tiny mostly pit olives would attract a lot of unusual birds.

Ole Kisemei stopped the rover and got out and started whistling, gesturing for me to be quiet. He was calling a very shy and skulking but spectacularly beautiful bird. My birder friends at home often don’t like me using my high tech apps, but Kisemei didn’t mind. In fact he encouraged me.

And so soon we had the most magnificent experience with one of the most spectacular birds in the African kingdom that no one ever sees. In fact it’s so elusive it’s called the Ghost Bird.

But it responded to my phone app’s call, and soon two intense neon yellow flashes, searing black pitted yellow circle eyes on a pair of grey heads with red breasts were flying all around us, angry with our intimate intrusion. Two never revealed grey-headed bush shrikes had come into the open!

At the edge of the forest we began our descent and I caught a flash of bushy white in the treetops. Black-and-white colobus monkey! We had just stopped for a while to watch baboon and then sykes monkey, and now this third primate, which is absolutely the prettiest in East Africa. It flies through the trees like a goshawk, plastering its giant bushy white tail like cottonwood seeds all over the leaves.

A couple times I thought our old but reliable Landrover was going to somersault down the steep, slippery and rocky track, but Kisemei kept us terrestrial. We emerged onto a beautiful green short grasslands with lots of patches of small croton bush. Zebra were everywhere, the rain-washed black-and-white hides stunning amidst all this greenery.

Tiny Kirk’s Dik-Dik scattered in front us. A dozen banded mongoose garbled as they moved across the road in front of us then onto the grassland like a carefree octopus searching for ground food. There were eland, wildebeest, gazelle, impala – everybody beautifully clean and brilliantly colorful!

The Mara is so magical. There are many places in Africa with more dramatic game viewing, more awesome landscapes, more apprehensive animal encounters, but the Mara irons all that out into a simple, peaceful paradise. I’ll never get tired of this place.

Now back to Nairobi to prepare for my next group. Stay tuned!