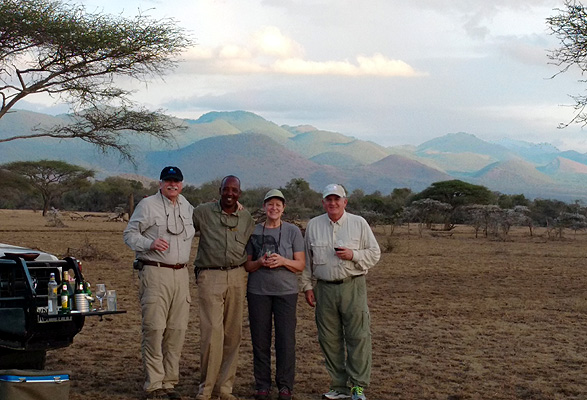 The seasons changed in front of us. We flew into Chyulu Hills near Tsavo in Kenya in the dry season, and two days later the veld had transformed with some of the heaviest rains I’ve ever seen. It was beauty incarnate.

The Chyulu Hill is this relatively small area of ancient crushed volcanic blowholes now covered in verdant bush. It stands above the great grassland plains that ultimately touch Mt. Kilimanjaro, so as we left the hills to game view in the plains, Kili was always in view.

Because it had rained there heavily before reaching us, the entire summit of Uhuru was white, white with snow. I don’t think I’ve ever seen it so completely covered in white.

Many things in the wild know the rains are coming, or simply through some hard-wire clock in their genes act as if they know. So on our first “dry” game drive it was also beautiful, because all the acacia were in bloom. The small whistling thorn acacia were covered with white flowers. The magnificent flat-topped (tortilis) acacia were covered in yellow flowers. As dry as it was, new leaf had already emerged.

The red-headed weaver above my plunge pool at Ol Donyo Lodge had already built nearly half his nest. So the veld knew the rains were coming. And boy, did they come.

As I write this now at night the entire southwestern horizon is like a fourth of July, there is so much lightning. The full moon, though, is out in the eastern part of the sky and lighting the flat veld that surrounds Kilimanjaro with that beige linen color that like a fog seems to undulate on its own.

So from the first “dry” game drive to the second day’s “wet” game drive, grass had sprouted everywhere. The animals were super pretty, because they’d all been through the car wash. Zebra were shining magnificently. Giraffe were displaying all their nuances of brown and orange color lost when they trudge along with a dust cover.

The jackal were glistening, the oryx shining and everybody was obviously so pleased and relaxed that at last the rains had come, that we got remarkably close to a lot of beasts.

At on point we made a turn around a little hill canyon and there can only be described an Alice in Wonderland mushroom bonanza. It was a “pod” of eland, a good half dozen or more each weighing 1400-1600 pounds looking for all the world like they had no skeleton, just blobs of beef, and they were lying down on top of one another like a bunch of discarded futons.

We also saw tons of impala as usual, lots of Thomson and Grant’s gazelle, good amounts of southeastern wildebeest and over the course of the two days here a half dozen big male elephants and a dozen hartebeest. It was fantastic!

A delight for me is that these folks are really interested in birds, and there couldn’t be a better time. This is just before all the winter migrants leave, so we saw hundreds of the stunning dark blue pastel Eurasian rollers, a flock of colorful Caspian terns, several migratory fiscals and harriers.

We watched an African gymnogene raid a weaver’s west, had countless go-away birds scream at us and got the precious, rare glimpse of the rosy-breasted shrike.

But the highlight of our game viewing was completely unexpected and came towards the end of the two days just before we were going to stop for our sundowners.

Two warthog raced across our paths. We’d seen plenty of warthog, but usually in family units. These were two young males, one with a white mane certainly a few years older and the other a tad bit smaller.

So they weren’t brothers from the same litter, nor could we see any indication of any other warthog that might represent their families.

So I stopped everyone and asked for a moment’s patience as we let them settle down, so that we could try to figure out what was going on.

Then the battle began. The tusks crashed sending its own kind of thunder across the veld. Then the tusks locked.

They pushed each other, maneuvered for position and waited for the slightest advantage so that one could jab the other with its tusks. As the fight intensified, our presence didn’t matter a hoot. We got within 20 feet of the fighting and shot dozens of photos and videos.

The fight just went on and on. Soon their nostrils were filled with blood. The smaller one with the darker mane actually managed to flip the other one, once, and jab in the behind. That guys genitalia began to bleed as well.

Within 15 minutes they had lacerated each other’s faces and blood covered their tusks. After about a half hour they were spent, basically just staying locked with one another. We left without a victor being declared, and frankly, I think it more likely they both ended up loosening than either one won.

On to Amboseli! Stay tuned!