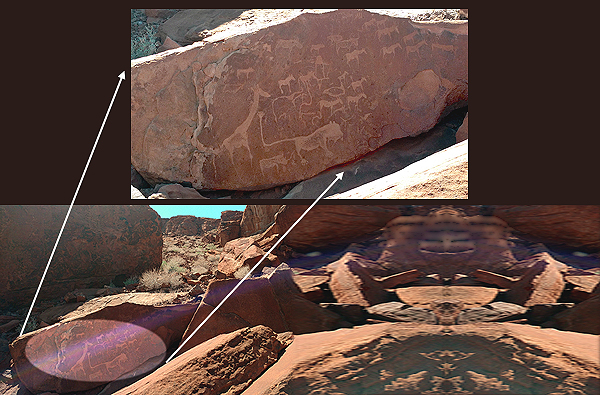 For the endless generations that preceded Jao, the fertile valleys and hills of Damaraland filled his people’s pots with nutritious meats: too much oryx, springbok, kudu and sometimes even elephant. Damaraland was a paradise for hunter-gatherers. The climate was warm but not hot, the rains were good, and the great grasslands supported an enormous amount of wild game.

Only giraffe hadn’t experienced the quick death that Jao’s spear inflicted, its tip laced with the white toxin of the White Bush euphorbia. Giraffe were not hunted. It was known that with their necks outstretched, they could touch the clouds. Killing them might jeopardize the rains.

Jao took many days to etch onto a sandstone cave face the lion that his father had become. The caves were filled with etchings of all sorts of other animals, as each San who died ascended into the spirit world of the animals. But his father was a chief shaman. He became a lion.

It was very difficult to find a prominent place to depict his father’s journey. The San had been coming to this shrine for more than 4,000 years. The sacred sandstone caves of the Doubtful Spring already had the etchings of thousands of shamans not to mention tens of thousands, hundreds of thousands of individual San.

With time the climate had grown drier and warmer. Great hunks from the caves collapsed into huge boulders that rolled fearfully down the mountain and would splinter into dust. Not only did Jao have to locate a prominent position, but one that he felt could withstand more climate distress.

Many had criticized him for taking so long to find the right sandstone face. Perhaps there were other reasons he was dragging his feet.

When the etchings were completed and the feasting and singing were over, Jao lingered. His sons were worried. It was not customary to mourn anyone who had ascended into the eternal world of the animals, much less a chief shaman who was now a great lion.

While it was customary to carefully lay the granite tool that Jao used at the base of the etching when he finished, Jao instead kept it in his pouch. This was worrisome. While it was true that his tool was slightly better than those who first etched many generations ago, it was not particularly special and looked like all the others that littered the base of the caves.

Jao, you see, was now the chief shaman. He was now responsible for all the San who were still alive. Many had left. Sometimes even families were broken apart.

The great grasslands were no more. Sand covered most of them. The great black mountains of the Naukluft and the highest of them all which men who would not arrive for 2000 years called “Brandenburg” were turning beige and red as they became coated with sand.

There were fewer and fewer animals to hunt. More babies were dying because their mother’s milk was not nutritious enough. Some said there were mothers who were burying babies born alive.

Jao deliberated in the cave in which he had etched his father’s journey, until he was nearly dead of starvation. Then he returned to his clan and let his people know. The Long Day of the San – more than 4,000 years – had come to an end. Jao was the last shaman, the one who led the people into the night. All that would remain in Damaraland would be the few animals that somehow were learning to survive in the desert in a way Jao and his people could not.

We visited Twyfelfontein (Doubtful Springs) and learned of the 5,000 etched figures already discovered. Our guide said that anthropologists continuing to study the site believe there are thousands more created over a period of 4-5,000 years.

The etchings themselves cannot be dated. What are dated are the tools that were used to etch.

Damaraland at the time of the first Egyptian pharaohs was a paradise for nomadic hunter-gatherers, a temperate savannah packed with game. As the central shrine for its society, Twyfelfontein was where the wandering hunter returned for ceremonies including the most important one, the ascension of the human spirit into the animal world.

The San Society embodied by the engravings found at Twyfelfontein was an advanced civilization that lasted continuously for longer than any other human society but Egypt.

Then around 2000 years ago the climate grew much hotter and drier. Many animals went extinct and those that remained were thinned out considerably. The San dispersed and their 4-5,000 years of continuous civilization came to an end.

Twyfelfontein is not a principal attraction for most foreign visitors to Namibia, but it should be. Have you visited Luxxor in Egypt, the Parthenon in Greece or Petra in Jordan? These other great civilizations were no more enduring than the San at Twyfelfontein. But there is a very important difference. The San is the only ancient human civilization that leaves no written trace of war. Perhaps our earliest civilization was our best.