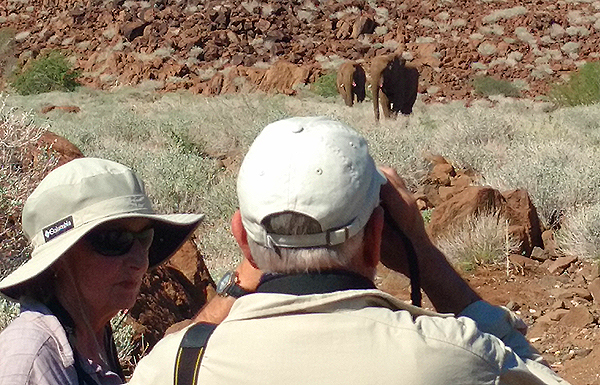 When Africa recovered from the millennia of drought that caused a small band of homo sapiens to migrate to Europe, the southern half of the continent flourished, again. Great grasslands and increasing forests nurtured enormous numbers of animals.

Then around 2000 years ago the climate in the south changed again, growing much hotter and drier. Many animals went extinct and those that remained were thinned out considerably.

The animals that remained adapted to an increasing desert environment. The most famous of these are the 7-800 desert elephant found here.

These desert elephant live in an area about the size of New Jersey. Compare that, for example, to a slightly larger number that live in Amboseli National Park which is the size of metropolitan Chicago. The ele found in Namibia are very few and far between.

Seeing them is a principal goal of visitors to Damaraland. We knew it was going to be tough. Unusually heavy rains have come to Namibia, and that means the elephant like all the animals disperse more widely.

Our day began with a magnificent breakfast on a hill that overlooked the seemingly endless landscapes we would have to search.

Like game viewing everywhere in Africa today the guides help one another. Radios were abuzz, cell phones were ringing and the word came that the elephants had moved into the mountains.

Desert elephants drink every 3rd day or so, compared to their cousins on the more verdant savannahs that drink 50 gallons of water daily. During the dry season they are nonetheless confined to ephemeral rivers where they can dig for water. These desert river beds have a limited variety of vegetation for fodder.

When it rains the eles move into higher areas where a great variety of vegetation grows.

We hailed one Landrover that had seen them, but the word was that they had traveled behind a mountain that had no tracks.

Our expert guide, Richard, swerved our car around and gunned it in the opposite direction. He knew many of these hills like the back of his hand, having grown up in the area. Soon we were at the end of a track where a narrow passage – a small canyon – led to the valley in which he thought we’d find the ele.

It was in the mid 90s. The ground was flat but rocky as this desert area is mostly volcanic covered with sandstone. So we had to walk over thousands of pieces of sharp little basalt coated by centuries of blown sand.

We started quietly through the passage. At the end Richard pointed far ahead to a mountainside. Binocs were raised and we saw four elephant, two females, a juvenile male and a 2-year old.

We sat down quietly so excited to have found them! I’ve seen them several times before and each time is newly exciting, simply because they’re so difficult to find.

A lot of myths are ascribed these creatures. Frankly, I don’t think they’re much different from the ele we see in the deserts of northern Kenya. They’re about the same size, the tusk size is about the same, and they’re more languid than cousins in the better watered savannahs.

But their overall behavior is quite ordinary for elephant, which as I’ve written before, is being lost in the congested populations of East Africa. The point is that there are just so few of them, although their numbers have been constant or increasing slightly over the last few decades.

The single profound difference that exists between these creatures and all the others on the continent is hard to observe and even harder to explain: They just must drink a lot less water than most ele elsewhere. Somehow, unlike Jao, they adapted.

As I was pondering all this, I didn’t fully recognize that those four ele which we had struggled to see at all, were walking straight at us!

They walked towards us rather quickly! We moved back up the passage, stopping for more and more pictures. Finally Richard ordered us back into the car, and before they appeared right in front of us, he moved the car back from blocking the passage’s exit.

It was an extraordinary experience. We left reluctantly, as the 2-year old continued to sleep under her mother’s belly in the shade of a large Shepherd’s Tree. Stay tuned! We’re on our way to Etosha.