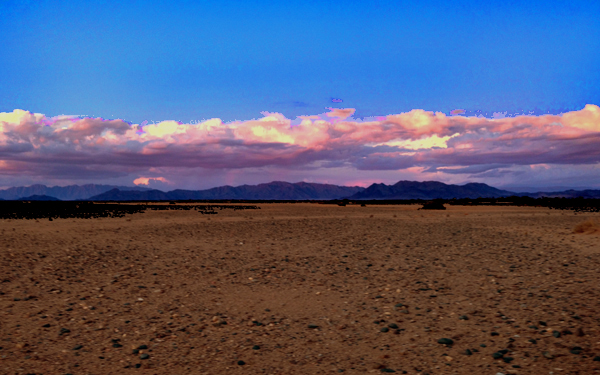 Each evening of unbelievable color was followed by a vast darkness illuminated by an universe crowded with stars and planets and meteors and ashy galaxies. But its absolute quiet was disingenuous, like a thick blanket tucked over you in the dead of winter that doesn’t keep out the cold.

We might not have heard the nuclear blasts, but they were all around us. We saw out of our world every time we looked up into the night sky.

Our exceptional guide, Richel, wanted to constantly remind us of all the life that bothers around the desert floor. She showed us the weird beatle, the blind mole, the skink, the transparent spider and red pepper moth. These extreme living things get water in unusual ways. The palmatigecko sticks it head up into the thick fog, opens its eyes wider than its mouth and droplets condense on its eyeball which it then licks off with its super-long tongue.

“We have 32 species of bird,” Richel implored us, and we saw the dune lark, the sociable weavers’ gigantic nest, the palm swifts and sparrows and a one-legged pied crow that in less than 2 days I befriended with offers of my biscotti.

A fringe-eared oryx, or gemsbok, seemed to be sneaking looks at me from under every rare bush. We saw a couple springbok, as well, and a family of baboon far in the distance at the park gate. Richel insisted there were also brown hyaena, black-backed jackal and bat-eared fox.

But listen, total up all of this, double it, quadruple it and you still have a vast, vast place that for practical purposes is lifeless. The Namib-Naukluft is about the same size as Massachusetts and Connecticut combined. Imagine how many birds, reptiles, spiders and deer, skunks, coyotes, etc. live there!

So with stipulation that yes, we understand there are really weird and fascinating living things around, what impresses you is the big, gigantic, falsely lifeless, super beautiful desert.

And it was even more so for us, because of unusual rains.

“We count our rain in drops,” Richel explained, and it’s absolutely astounding what a single drop of water does here. It opens a 100-year old seed pod that has lived unmoved in the sand for a century. It changes the color of a billion-year old rock from grey to blood red.

These rocks by the way come from Godwana. That’s right, the single continent that first appeared on earth 850 million years ago. More than 80% of the Namib-Naukluft park is these ancient Naukluft mountains, uneroded because there’s been so little water over that cast period of time.

The other 20%, the Namib, is the “sand sea” recently made an UNESCO heritage site. These are the world’s highest, most impermeable sand dunes. They are red and grey and beige and form over Naukluft mountains.

We lost all perspective driving through them. Richel pointed to one on the right, named it, marked it as 400 meters high; then pointed to the left side, named a dune, marked it as being only 200 meters high. But they looked the same! The smaller one is just that much closer to you, but there’s no way of gauging it!

But it is the sky, the most amazing horizons on both sides, that prove what’s below it is totally unique even magical.

Mixed with the constant wind-blown sand that manufactures the 1000′ high sand dunes, the cloud and droplets of rain and bits of fog create a palette of primary color fireworks all over the heavens.

Last night in a mini dead vlei (place where 800-year old dead trees still stand) the sunset started yellow and went to apricot to tangerine to red and faded under the billion stars as a long pink strip for miles and miles along the visible horizon.

But on the other side, where the really weird and climate confused storm was forming, whiffs of grey cloud that turned yellow and white sat in front of the purest, dark blue sky I’ve ever seen, and that was capped by a layer of purple and mauve that ascended right up to the southern cross.

When night establishes itself, it’s as if you can touch the stars. They are suddenly spread before you three dimensionally. Those further away twinkle more. Those nearer are bigger and brighter and in between are gases and clouds and nebulae all bursting light in absolute silence.

I’ve seen the American deserts, from Palm Springs to Death Valley. I’ve seen many parts of the Sahara. I love the Great Northern Frontier deserts of Kenya. But only the Namib jingles the twinkledom keys to the tunnel to the great beyond.