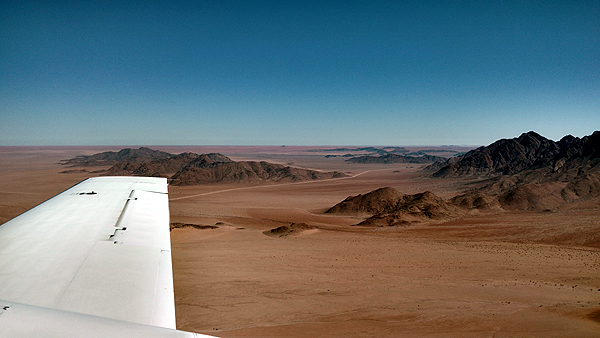 Most of the time I fly on safari from place to place. Today we flew backwards, nearly 138 million years.

The Namib-Naukluft is the oldest desert in the world and it has changed little over that enormous span of time. Modern man’s interest, though, has resuscitated long dormant forms of life that quite naturally had ceased to exist here when the rain stopped falling. Now, some are back. And, the rain’s started falling, again. It’s all kind of creepy.

But it’s all also awesome. Half of Namibia is a desert. That’s an area the size of Germany. Most of the rest is Mojave like desert with a small bit, the Caprivi Strip, lush and green.

We’re in the desert of the desert, Sossusvlei, just to the east of the gigantic desert park. It’s true that our fascination with this area which I think looks like Mars has led to more careful understandings that deserts are living theaters, too. Reptiles, microinsects and the most amazing plants do survive these extreme conditions.

But relatively speaking, deserts are lifeless places and the Namib is the desert’s desert.

After our 45 minute flight from Windhoek Steve looked back at me beaming and said, “That was worth the entire cost of the trip.”

One of the beauties of the Namib is the unique very old geology that traces its heritage back to the old single earth continent of Godwana 850 million years ago. That’s when the Naukluft area of the Namib-Naukluft first formed, a metamorphic mountain range that kept moving westwards towards the Atlantic.

The wind over all that time, combined with the extreme dryness and heat of the area, produced the Namib, or Sand Sea. There’s actually two sand seas. The most recent is only 4 million years ago, and it covers the 20+-million year old original. Tomorrow we go to the highest sand dune on earth.

Flying in is hard to describe. The Sand Sea is red. The Naukluft looks like rugged new mountains on Mars, but they aren’t new at all. They just don’t erode away in this super arid landscape.

When I first came here 40 years ago, tourist development was only just beginning. Correctly, the park authorities allow no tampering with the environment within the actual 20,000 sq. mile park. But outside, where the camps and lodges have now been built, tampering began a long time ago.

It had to. These places need water. As with most deserts, there are plenty of aquifers. That’s obvious anyway from the remarkable trees that survive on the edge of the sand seas, with roots that sometimes dive a 100′ into the ground.

Then these places decided to create boreholes, or small water holes, outside their lodges to provide some entertainment for the guests.

We’re staying in the 40,000-acre private Wilderness reserve adjacent the park. Wilderness Safaris maintains 4 boreholes, and the result is that just below the deck we watch oryx, springbok, ostrich and a variety of birds coming to water.

So the animals “are coming back.” They’ve always been here, of course, just not as many of them. The really creepy thing is that while it rarely rained on the Namib, it now does so with notable frequency, several times or more a year.

The last two nights experienced some rain. As the manager here explained to us, “Rain to us is measured in drops.” So it didn’t last long, but the temporary explosion on the desert of green vegetation was striking. Like seeds that have slept for eons, life seems always ready to grow.

And this is not at all the right season for the infrequent rains. Normally, that comes several months earlier.

So did Mother Earth respond to man’s resuscitation of the Namib’s wildlife? Of course not, but it’s the kind of fanciful idea you create in these weird places. Mother Earth has to drop the moisture from Glacier Bay’s glaciers somewhere! It’s getting wetter and wetter in Africa, even in the oldest desert in the world!