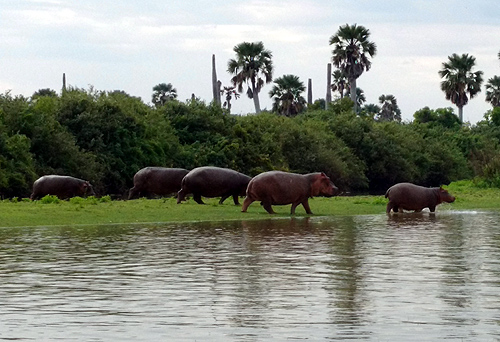 We’re in The Selous, a giant, uncontrollable river delta a bit like the bottom of Louisiana, a reserve the size of West Virginia in central Tanzania.

The Selous is not for everyone. Even now at a cooler time of the year it’s extremely hot and humid. Game viewing is restricted to not very many tracks, or by boat on the Rufiji River.

But it is the river which makes this such a wonderful safari experience. And with a massive dam planned in the next ten years, it’s an urgent experience, as well.

Approximately half of all of Tanzania is drained by the Rufiji and Ruaha Rivers through The Selous into the Indian Ocean. This is a wild unkempt wilderness, not quite as ever-changing as Botswana’s Delta, but similar. The great sand rivers change courses easily.

We stayed at a camp on the Rufiji and it was spectacular. Our tents were on the embankment just above the high water mark, so that now it is easily 15 feet down to the water. From my deck I looked over the great Rufiji, about a mile wide at this point, defined by great stands of Borassus palm. Since we’re on a bend, there were wonderful sand bars used by numerous crocs and hippos.

On our first river excursion we bucked the extremely strong current until we came to the first lake created as a side-water by the river. This is a main feature of the Rufiji and it results in more placid water not sure for our game viewing, but for the animals as well.

We saw tons of giraffe and impala together with waterbuck and buffalo, zebra and wildebeest on the dense game area along the shores of the lakes and river. We pulled close to elephant pondering whether or not to cross (and swim) the deep lake.

This is a time that resident birds nest, and the bird rookeries were exploding with activity. We spent a good amount of time at one, a white-fronted bee-eater colony. Our pontoon boat pushed right up to the edge of the water underneath the colony.

The bee-eaters nest in holes dug from the clay sides of the river. There were easily several hundred and we watched with fascination as they managed their one hole among so many others.

Just before we left, a monitor lizard appeared, its tongue flashing out into holes looking for eggs. The bee-eaters descended on it en masse but it wasn’t deterred. We watched him come up short from a couple holes before we had to leave.

I think the single most impressive thing about river game viewing in The Selous is the crocodile experience. There are so many the place begins to look like a set for an Indiana Jones move.

Probably not as big as we find on the Mara or Grumeti Rivers, or in far north Kenya, but the sheer numbers staggers the imagination. These crocs subside mostly on fish, and there are some incredible fish in the river! 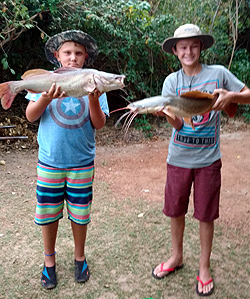 Ben and Charlie went fishing and came back with over 25 kilos of fish! The largest was a catfish around 12 kilos.

But on the next day we saw that fish is not the sole diet of these river monsters. On our game drive, which focused along the shore of the river and lake, we were watching an idyllic scene of impala and waterbuck in a beautiful landscape with a small stream flowing into the lake.

I remarked to everyone to watch the impala, because they are masterful leapers. Shortly after I said this, a young waterbuck raced across the river (didn’t leap) and its left leg ended up in the snout of an 8–foot long croc! Snorting the waterbuck disappeared limping into the bush.

The animal persisted and pulled its leg free, and the croc followed it a few meters out of the water before slipping back.

Fish eagles are the trademark of wild Africa. They look and act very much like our bald eagles, but they have a piercing, undulating call absent from our eagles. I see them practically everywhere in Africa where there is water.

But here in The Selous they are remarkably vocal, calling constantly and often while flying. I think this is because there are so many of them, territories are very competitively obtained, and the screaming comes from the victors.

I was surprised how little good wifi we’ve had the last week. One of the staff at our Selous camp explained that the demand has grown so significantly that the infrastructure just isn’t there. So stay tuned! I’ll blog whenever I’ve got a signal! 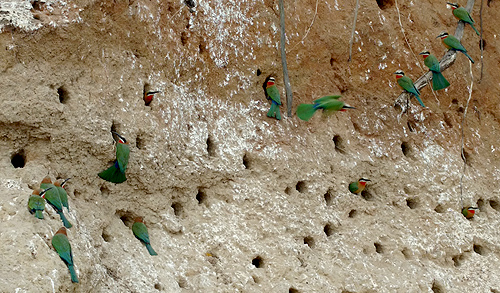