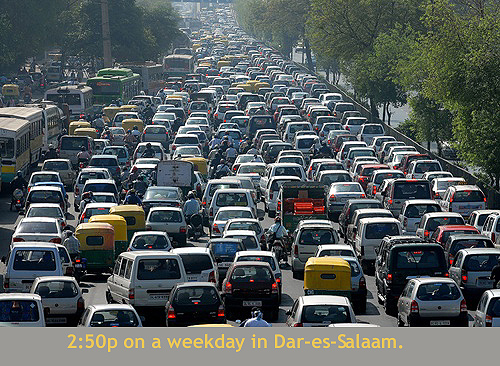 On a two-day hiatus from my Miller Family Safari, I find myself in a Poe or King hell: Dar-es-Salaam.

The family’s foreign exchange student joined them for the first ten days. The two of us peeled off the group yesterday so that I could shepherd him onto his international flight home to Paris.

Unable to catch up with the family in Zanzibar for two days, I’m staying in Dar es Salaam. The Ramada Resort on Mbezi Beach had a good deal, and I also booked their “40-minute” transfer from the airport. It took two hours.

This was 7 p.m. on a Thursday night. My savvy cabbie avoided the main roads as much as he could. We wound our way through a maize of small streets that anywhere else in the world would resemble a walking mall, but with nano-millimeters to spare we passed giant petrol trucks and mammoth buses, but at least we were moving.

It was dark. No street lights, so the only illumination was the ubiquitous “open” and “welcome” neon signs of the myriad of shops lined up one after the other. Bridal shops, grocery stores, children’s toys to many pharmacies were doing a robust business, many with lines of people waiting to get in. People crossing the street, 3-wheel tuk-tuks and an unending barrage of motorcycles somehow effortlessly wove in an out of our two moving lines of mammoth traffic.

But this clever navigation had its limits. Three or four times we had to get back on a disastrous main road: Four, five or six lines of vehicles moved often quickly then stopped … once for 25 minutes. White uniformed policeman at several intersections wielding large red or green neon batons waved tides of vehicles forward and back in a futile attempt to unclog the mess.

Two minutes less than two hours I arrived at my destination, 11.2 miles from the airport. Taxi fee: $70 with tip.

Of course I was frustrated and exhausted, but I couldn’t help thinking of the people who live here, of the enormous resources spent just coming and going. Easily 1 out of 4 large trucks were petrol tankers. Sometimes my cabbie decided to turn off his car engine, but usually not. He explained that was hard on the engine and used even more gas.

What percentage of the gas was used to stand still? But that pales in comparison with the time all these people have lost of their productive lives.

Speaking with staff at the hotel I learned that most of them live in reasonable proximity to the hotel, but that was less true of management and specialty services. One woman said she spent five hours daily getting to work and back! Another has been given a room in the hotel, and “commutes” home (15 miles away) on his days off!

Most African metropolises are a mess. Urban immigration for the last two decades has stunned social anthropologists by its magnitude and speed, and Tanzania is right there at the top of the charts.

Of the estimated Tanzanian population of 55 million, nearly ten percent reside in Dar es Salaam. Add surrounding communities in the area where I stayed Thursday night and it’s likely around 8 or 9 million.

I’ve written about Nairobi’s congestion often in the last several years, and the new highway system that came on line last year did seem to help … a little. But even in Nairobi’s worst times, it did not take two hours to go twelve miles.

This was a real education for this old safari guide. All the pontificating about how to help the developing world, how to share the world’s resources, seems meaningless after this experience. Until the chaotic congestion of African cities is resolved, how can anything else begin to be done?