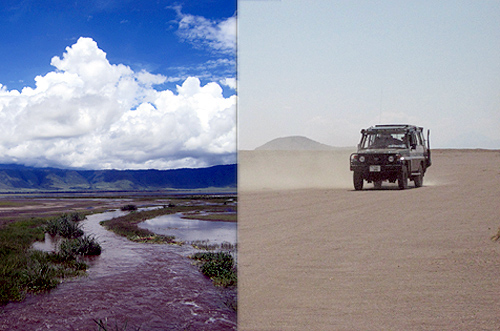 I suppose as we age the accumulation of changes so untethers us from our foundations that it seems apocalypse is right around the corner. Nevertheless, this safari truly makes me wonder if African wilderness will be around much longer.

I remind myself that in 1979 Peter Beard published a best-selling book, The End of the Game, and his predictions couldn’t have been more wrong. There was not the near total collapse of the wild animals in East Africa he predicted, but in fact a tripling of the animal populations.

So I’m hesitant now to render a similar prediction. Few knew the East African wilderness as well and intimately as Peter Beard. Few were as moderate or unopinionated as him.

Yesterday we left the crater for Lake Manyara National Park. The crater was enormously stressed, but not by the customary impacts of a normal dry season. This was a much different dry season, one framed by the extremities of climate change.

The single-most easily observed effect of climate change in East Africa is the severity of micro-weather cells. The crater like the Serengeti was severely dry, more so than normal. But the areas hardly a few miles away in the higher elevations of the crater rim and Karatu butte were soaked. Not so much by current rain (although there has been some unusual showers) but by the floods of the last rainy season which went on nearly a month longer than normal.

Drop back down to Lake Manyara and the desiccation of the veld was as bad as the Serengeti or the crater floor. Yet the lake itself is massive. Rivers flowing into the great lake itself are so strong that tracks I used in the rainy season in March are now under water!

All this because the higher elevations – a soaked micro weather cell – continued to drain off the unusually wet season.

Grass on the veld doesn’t grow because a nearby river is flowing, but it does mean that a normal light shower provides just enough moisture to bloom grass on that desiccated veld: I guess the best way to explain this is that despite an unusually hot, dusty and dry veld, an unusually high water table supports grass growth at the slightest encouragement.

We saw ridiculous numbers of baby buffalo in the crater. (Buffalo eat very little of anything but grass.)

We encountered so many giraffe in the Serengeti around lakes Ndutu and Masek that 8-year old Donovan began each game drive by announcing, “I guaranteed you we’ll see giraffe.” Masek and Ndutu were unusually large for the same reason as the crater lake and Manyara: heavy continuing runoffs from the nearby highlands.

Giraffes main food are the leafs of the acacia tree. Deep rooting acacia trees tap easily into a high water table. The acacia near all these lakes are leafing anew and even blooming, something not normal before November.

More than a hundred elephant around Lake Masek, dozens in the crater forests, and yesterday, almost a hundred elephant in Lake Manyara is not something I expected to see, now. There were many babies, and elephant abort at the slightest indication of a drought. Elephant are the most voracious consumers of vegetation on earth. They can easily move great distances and they don’t remain in areas without food.

So why sound the alarm?

Elephant, buffalo and to some extent giraffe, easily move great distances and fairly rapidly. Other animals don’t. Impala are home-bodies, with family collections rarely shifting far. Hippo might travel ten miles a night to eat, but they don’t easily adjust their territories, returning to the same river bed or lake each morning.

We normally see hundreds if not thousands of impala on a normal safari. I think so far we’ve counted 35 or so.

The first four hippo we found were frozen dead in the dwindling waters of the Seronera river, their hides already cracked wide opened and storks already picking into them.

All the 20 or so hippo we saw in the crater were crammed into the single lake at Lokitok with none in other normal areas like the well-signed “hippo pool.” At the famous hippo viewing area in Manyara we saw only a couple hippo and they were all very sick, their hides chalked with salt.

Could it be that only those animals capable of rapid shifts in territory will now survive? There’s more water than ever, but it comes as torrential rains in shorter intervals into smaller areas followed often by severe heat and drought.

Animals that can react to these anomalies might not just survive but prosper. Those that can’t will die. But the matrix that emerges will be radically different from the one that has existed all my career until now. Can the ecology retool and resync this fast?

My gut says no. But then so did Peter Beard’s almost a half century ago.