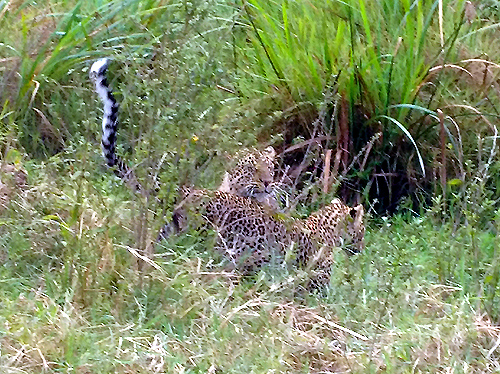 We’re in the Maasai Mara, Kenya’s best game park and the top of the great Ngorongoro/Serengeti/Mara ecosystem.

She had killed a wildebeest yearling this morning without much effort. Large files of the great migration are coming through the salient. We saw three groups of about 400 wilde and another of about 1000 that was running in single file.

We even watched a small group of several hundred try to cross the Mara River. Only one did! But the others’ reluctance was understandable. The river is already littered with dead wildebeest among very fat, giant crocs.

So the young female leopard that probably weighs around 120 pounds max had pulled the 220 pound yearling into the crux of a tree about 6-8 feet off the ground. That’s not very high for a leopard who can easily lift 350 pounds 20 feet into a tree.

But she was with an older daughter and I wonder if maybe she was teaching her how to lift the kill. In any case, they made haste with their feast, eating more than half of it in a single setting. That, too, is unusual for a leopard which may take a week to finish off its kill.

The urgency was in part because there were so many vehicles trying to watch them. The Mara gets a bum rap sometimes regarding too many vehicles, and for the vast majority of our game drive we were alone or just with our other vehicle in the Miller family safari.

But a leopard is prize stuff. So all the vehicles in the neighborhood came to see them, and that meant when we arrived there were another 7 vehicles. Once we got our fleeting pictures, I insisted we move on, as even more vehicles were arriving.

It was a fantastic first game drive for us!

We followed the river for the migrating wilde, encountered great herds of buffalo, saw elephant and a bunch of other stuff. The Mara is one of the most beautiful parks in my estimation. As the afternoon light cut across the prairie stopped distantly here and there by a single struggling acacia tree, there was a sense of wild peace you just find nowhere else.

Tomorrow we’re going out for most of the day. Stay tuned!