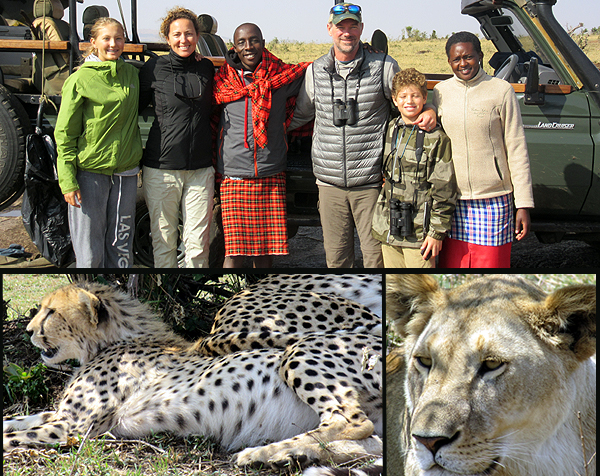 So guess what we saw this morning?

We left camp at 6 a.m., a half hour before dawn. The giant full moon peaked from under opaque cloud and looked like an orange as it dropped slowly to the horizon, losing its iridescence as the sky turned from grey to dark green to azure blue.

Thousands of white-tailed lark began to sing. The trademark of the veld, the ring-necked dove, remained silent. It was still too cold! That ubiquitous bird with its hypnotic coo-coo coo-coo won’t sing until it’s at least 60F.

And sunrise doesn’t help. In fact the breeze that the sudden appearance of the fireball creates disperses the valleys’ frigid mist over everything. It’s always so amusing to me how my clients are so surprised by the cold mornings now, and how even more surprised they are when the sun blasts open the new day and it gets even colder!

So we all huddled in three layers of clothing and blankets to boot as our guide, Lucy, drove us out of the private reserve into the Mara. It took about 45 minutes. The country is the same, of course, but the veld in the private reserve has been over grazed by cattle so was less green.

Giraffe, some zebra and a handful of gazelle were wandering into the private reserve, but the moment we crossed into the great Mara there was a remarkable transformation. There was no gate, no sign, no change in topography.

Just suddenly lots more animals! The first scene I remember was about 30 stately giant eland scattered around a narrow twist in the Sand River. Small boulders interrupted the little water course forcing little streams to wander even further. A gnarled old fig tree angled off from the embankment, its broken trunk like twists of taffy, a white-backed vulture hunched menacingly at its top.

The eland – the world’s largest antelope often more than 1800 pounds – seemed to step gingerly among the boulders and streams, occasionally splashing water into the morning light. It was almost as if you could hear a splash as a puff of drops twinkled in the air.

The river is the border between Kenya and Tanzania. After our ten days in Tanzania we embarked on a two-day journey to Kenya via Zanzibar, so that we could get right back to the edge of Tanzania?! Since 1979 tourists have not been allowed to cross the border between the Mara (Kenya) and the Serengeti (Tanzania).

The Mara is the northern most part of the great Ngorongoro/Serengeti/Mara ecosystem, and it’s the only part of the ecosystem that normally gets rain now. So the great wildebeest migration is drawn here from the Serengeti.

Because the Mara is wet usually year-round except October and November, its blossoms rarely fade! The wildlife prospers year round and results in one of the densest biomass of big animals found on earth.

We were heading down the Sand River to find the migration, but hardly a few minutes after the eland and in a dense group of five-foot high bushes we came across two lovely female lions with their two sets of cubs.

Lions everywhere are territorial and don’t migrate, and so certain taxonomically insignificant differences do emerge regionally. The Mara’s lions are known for their white necks and overall lighter color than their cousins south in the Serengeti.

Because of the migration all the cats were fat! Right after finding the four lions we saw two cheetah on a raised plain not far away, chomping down hysterically. Cheetah are the smallest of the big cats and they have to eat quickly or something will take the kill away from them.

We actually found the cheetah by noticing the anxious movements of a nearby jackal, waiting for the scraps.

The mother cheetah and her near-adult son had nearly finished completely a Thomson’s gazelle, the cat’s favorite prey. A few minutes after we arrived they both wattled away from the kill with bellies three times their normal girth. The jackal dashed in and ran away with some innards.

So we wanted to get to the river, remember? Time was passing, but we were passing a leopard! What a magnificent creature this cat is, but I felt bad at the scene. She had found one of the few thick bushes in this particular plain, and this was the closest we got all morning into the main tourist area of the Mara.

This is the high migration season. I try hard to avoid the crowds and we had so far successfully done so, but eight Landrovers around a single bush means leopard so we joined the audience. Two other cars then came racing in and the leopard dashed out at the cars, waving its front paws and growling loudly, then dashed back into the bush.

I was impressed with how all the drivers reacted. Everyone turned off their engines, let quiet prevail, then slowly one by one we all left. Every client wants to see leopard, and few actually do. So it’s something of a challenge for we guides to explain that sometimes you just have to let it go.

The river, right? Head to the river! But … in our way was a giant eland carcass, vultures hissing and fighting over the leftovers. So we tracked back to the lion who had enjoyed this massive feast, a magnificent one-eyed old male whose belly was so big he tried but failed to roll over!

At last we reached a hill and had to stop. Lucy and our tracker, Wilson, set out breakfast for us. It was getting nearer lunch. I scanned down to the river with my binocs and could see masses of wilde. After an incredibly sumptuous spread of eggs, fruit, yogurt, cereals, donuts, pancakes, bacon and sausage; coffee-tea-and-hot-chocolate, we headed at last to the river.

The route was over some rocky off-road terrain, not suitable for vehicles less strong than ours, and it took us less than 15 minutes.

The wilde were joined by zebra and gazelle, topi and hartebeest and we even watched baboon scampering away from the racing migratory files. I understand that right now it’s even denser further west, near the Mara River where there are many dramatic river crossings going on.

But we were content to see the edge of the great herds. Mostly because once we got to this remote area, we were the only ones there.

In the most beautiful place on earth. At last the ring-necked dove was singing!