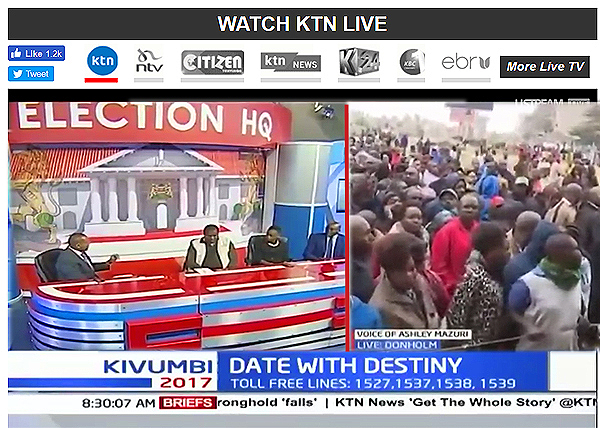 Incredibly punishing rains fell last night. Lightning kept the night alive as if it were a fire. Water fell into the wee hours and ended with a cold wind that continues to blow under overcast skies.

It’s election day in Kenya. You need to pay attention. No country’s problems will be solved within their own borders, anymore. No matter where in the world you live, the frustrations you feel are likely global; solutions must be global. You’ve got to understand the rest of the world, even if you never leave home.

Democracy is declining around the world. Today only 43% of the people in the world are governed by democratic regimes. If individual choice matters to you, this decline must matter to you and you must focus on how to preserve it.

Kenya is one of those countries and like most democratic countries, today, there’s turmoil in the process of democracy. Almost 16,000 candidates are standing for election today. The country is highly polarized and the main factions each command about half the electorate.

To navigate and conclude the close election process, a special commission was established to authenticate the results. Last week the chairman of the commission was kidnapped, tortured and murdered.

The voting goes on as planned.

Together with the family I’m guiding on safari, we are in about the safest place you can be in Kenya, today, the middle of the bush. Nairobi and other hotspots have emptied. Violence crippled the country after the election ten years ago, and nearly did so in the last election.

While the family was relaxing yesterday afternoon I spent more than an hour with employees of the camp here talking about the election. The manager had elaborate plans for today, so that every staff member would be able to vote. We are in “Raila Odinga” country, but the employees of this sophisticated camp come from around the country.

There was an excitement and collegial consensus that the results – which will be announced some time tomorrow – will not be followed by violence, no matter who wins. But that’s the problem. Many small-minded or poorly educated Kenyans have no trust in the authentication process. Sound familiar?

Enock said it was time for more youth to get rid of the old men. Douglas said that the real problem was that there aren’t enough “good” choices, that the two main parties don’t really represent the bulk of the population.

My take is that around the world democracy has been hijacked by the elites. In some places, like America, that’s big business and the rich. In many other places, like Kenya, it’s tribal – an ethnic hijack. But in all cases the process of hijacking is the key to understanding why democracy is, today, not working as it should.

Tomorrow I travel with the family I’m guiding on our journeys home. I’ve chartered a small aircraft to bring us directly from the bush into the incredibly secure international airport, where we will have a day room at a hotel within the secure complex before our late evening flights home.

Normally the scheduled flights from bush camp go into the local Wilson airport, and a half hour transfer through the outskirts of Nairobi is then required to reach the international airport.

It’s likely results will be known before we leave.