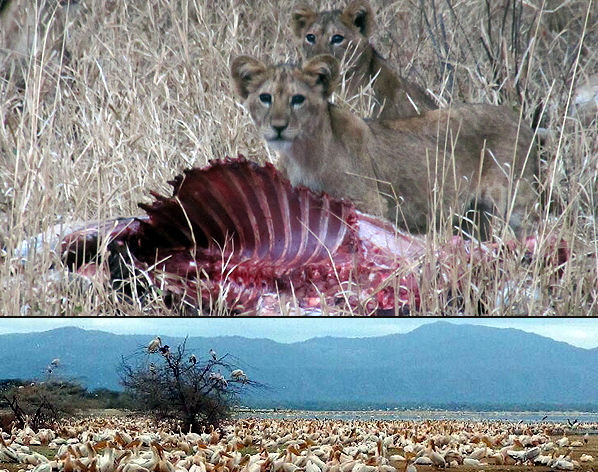 A good safari is an adventure, and an adventure takes effort. I keep thinking of the phrase, “No Pain – No Gain.” Sure, we can end the day at an unbelievably luxurious place with bubble bath and champagne. But just take a look at a successful safari traveler stepping out of her vehicle at the end of the day:

You won’t see the Belle of the Ball.

There’s no better place at this time of the year for a safari adventure than Tanzania’s two great wildernesses which sit just below the Great Rift Valley, Lake Manyara and Tarangire national parks.

More than twice the size of Yosemite National Park, these areas sit in the richest large animal ecosystem on earth. More than 20% of all the non-fish, non-bird animals found on earth are found here.

This is because this is where it all began! More than 65 million years ago Africa was a fabulous jungle nearly sea-to-sea. Then earth started to cool, and Africa cracked. The Great Rift Valley continues to crack a few centimeters every year.

In its long history its produced more volcanic activity than any other fissure on earth. It also stimulated evolution. All the arboreal creatures that lived in the jungle now couldn’t any longer. Alas arose a bipedal creature who could move from forest to forest.

Along with a host of antelope, ungulates, weird tall creatures like giraffe and mighty monsters like the elephant, not to mention the great cats.

We left Gibb’s just after dawn. Less than a half hour later we were at the entry to Lake Manyara National Park. Most visitors spend just a few hours in this beautiful northern sector, where there are so many species of giant trees you think you’re entering the world of the Hobbit.

We wove through the dense forest, saw the dinosaur-like silvery-cheeked hornbill and then went down the river to the lake shore to see the hippos. But we didn’t turn back and leave as most visitors do. Instead, we went through the entire 32 miles of park road to its remote far end.

We saw all the usual suspects, but what was so impressive this day were the birds. Sometimes Manyara has hundreds of thousands of flamingoes, and it did for us! But rarely do you also see tens of thousands of pelicans!

The birds are here because their food is here: shrimp for the flamingoes and fish for the pelicans. A pelican is a large bird. When I tried to calculate the amount of fish that must be in this lake to sustain this collection of animals, it was mind-boggling!

We then left Manyara and drove through beautiful rural Tanzania, many prosperous little farming villages where rice especially is grown.

Then we entered a remote gate of Tarangire National Park. Nobody goes this way and frankly, everybody should! You need super good vehicles to ford the several rivers and good guides like EWT’s Tumaini, because sometimes the road disappears.

This is the high season. In the main gate northern area of the park there are hundreds of vehicles. All during our first afternoon in Tarangire, we saw no other vehicles. What we did see:

About thirty elephants vying for a water hole, fighting and then figuring out how to stop fighting. We saw a remarkable number of rare eland, the world’s largest antelope. We saw thousands, countless zebra and thousands of buffalo. Giraffe stopped to look at us pass, as if we were the attraction!

And during our several days in Tarangire we saw lots of lion, and how wonderful to see such healthy families during this time of serious lion decline.

We were out again before dawn today and just at first light we came across a three lionesses on a recently killed eland. They were maybe 15 feet from the rover’s tracks. With them were three young cubs that I think may not have seen vehicles before.

We came upon them after their first chew-down. They were resting and the cubs were feeling their oats, keeping four jackals at bay. But the cubs scampered away when we approached. We turned off the engine, went real silent and slowly they returned to the kill, as curious about us as we were about them.

Later we would see a pride of 20 with two magnificent males having just taken down two zebra.

Back and forth during the course of the day we experienced the whole sequence of a kill: just after the take-down, the first chew-down, a period of resting, then the second real feast where the lion increases its body weight by a quarter with hunks of unchewed raw meat.

It was hilarious watching young cubs after they gorged themselves. They’d try to get up, and everything would except their belly.

Then finally the lions have to go water, or their entire GI system freezes. They start to leave, and the vultures and jackals creep up. Then they race back chasing away the scavengers but unable to eat more. This goes on – back and forth – until finally the lions just have to leave.

And the vultures and jackals descend in a chaotic hissing free-wheeling battle for the scraps. By the end of our 7-hour game drive, there was little left but bare bone.

And very dusty, dirty, fatigued but completely excited visitors. You feel like you’ve just successfully run a marathon. Boy did the Tusker and Chardonnay go well with that gourmet lamb burger followed by strawberry mousse!