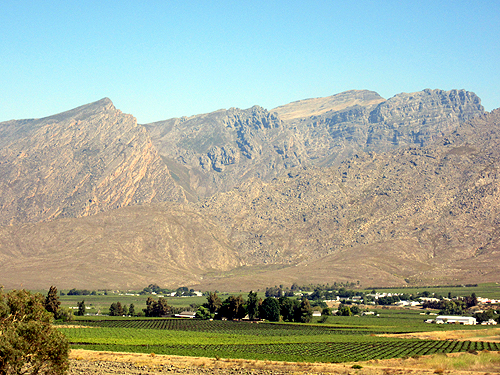 For the last two days we’ve been traveling on the Blue Train, one of the world’s premiere luxury trains.

We boarded the 10-car exclusive train in Pretoria and headed south through the heavy industrial areas of the Transvaal. I think people are impressed by the extent of South African industry, but what was a surprise to all of us was the massive Vereeniging Steel Works which went on and on as the train rushed past.


But it was mostly vacant and eerily quiet. The plant closed last September, terminating 400 jobs. Reason? Steel’s cheaper if bought from China.

Soon, though, we were entering the great southern end of the country’s massive bread basket. The first part was almost as depressing as seeing the closed steel plant, because the area has been suffering a severe drought. For the first time in most people’s memory, South Africa will be importing corn this year.

But as if to turn around our sinking moods, we entered a fierce thunderstorm with lightning and hail. It lasted most of the afternoon, and as the train left the heavy overcast the beautiful sunset introduced us to the beginning of the Great Karoo.

The train has been operating since the 1920s in one form or another. There is now another luxury train, Rovos Rail, but I prefer this less pretentious and more business-oriented service.

Prices are similar and with today’s extremely depressed Rand, the train was so full that people were waiting outside hoping that we didn’t arrive!

After your private butler takes you into your elegant suite and shows you all the bells and whistles, the train begins and I for one, ordered a big pot of tea with cold milk!

It came in elegant, heavy silver and was among the best tea I’ve ever had in South Africa!

The group would meet from time to time in the Club Lounge car. All drinks, even premium champagne and spirits are included, and when I entered the car one table was piled high with sweets and pastries.

Lunch is as big as dinner (unfortunately) but it gave us all the opportunity to try a variety of premium South African wines. The food was absolutely exquisite.

Wifi depended upon which area the train was speeding through, but if the area had wifi, we did, too.

I returned from dinner with my bed beautifully made and three large chocolates on the pillow!

I woke myself so that I could see sunrise over the Karoo. The Karoo is South Africa’s Mojave desert. I watched a number of raptors over the massive landscapes plus saw gemsbok, steinbok and springbok … and, of course, thousands of angora sheep.

What was most amazing were these sheep farms. A windmill provided water and solar panels provided electricity and they were all built near the train tracks and spaced, oh, maybe 25 miles apart!

It is outstandingly beautiful in a very lonely way, and I just couldn’t help but try to imagine the lives of these remote farmers. I was able to follow the route nearly mile by mile on my computer using wifi, and almost all of the handful of Karoo towns were settled in the mid 1800s by Boer trekkers.

After our final lunch we left the Karoo, climbed the jutting Swartberg Mountains, went through several tunnels (one 8 miles long) and entered a completely new world: the wine country, starting around Worcester.

It’s a landscape hard to beat anywhere in the world: lush, green vineyards under the cutting and ancient bare granite of the mountains.

We pulled into the “Mother City” about 35 hours after we left. What a wonderful, happy, relaxing and palate-extraordinary journey!