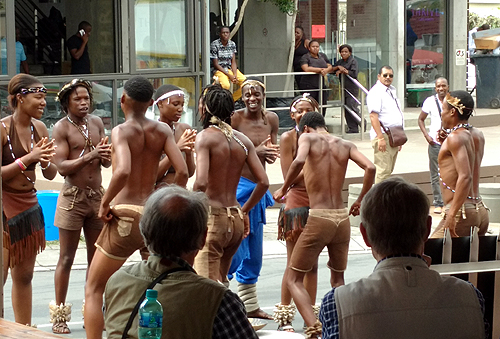 We spent the entire day touring Johannesburg and Soweto as I began my annual Cape/Bot safari.

We drove a lot, though the super luxurious areas and into the slums. We visited outstanding museums, including the Apartheid Museum and Hector Pietersen Museum. It’s an eye-opener for most first-time visitors.

I don’t think there’s any place in Africa that suffers from as many misconceptions and stigmas as Joburg. The city is immense, chaotic, congested and the smog got to me, today.

But parts of it like the suburb of Sandton where we’re staying are more luxurious than many of the finest suburbs of big cities in America. There are more private swimming pools per residence in Joburg than in Dallas. You’ll see more Benz’ and Porches than in San Francisco.

But we also saw the decaying side of the city that authorities are trying so hard to rehabilitate. The end of apartheid resulted in situations few negotiating its end anticipated.

The brilliance of the new constitution meant that refugees were welcome, and boy did they come literally by the hundreds of thousands! Downtown Joburg today is where these Nigerians, Somalians, Chadians, Zimbabweans and so many others eke out a difficult existence.

Technically, they’re all illegal, but also technically under the new constitution, they have the right to remain and enjoy public services if they weren’t detained when first entering.

So the city decayed rapidly. Crime escalated. South Africa doesn’t have the resources that say, Germany or Sweden has to provide for these immigrants and so they developed ghettos of extreme poverty and depravity.

I think it’s turning around, and some major banks and corporations like Anglo-American are relocating into the city center.

There are equally reversed misconceptions of Soweto. Most of Soweto is composed of lovely residential districts of what local residents fondly refer to as “matchbox houses.” They are all tidy, colorful, maintained and the dozen or so of separate districts all seem to display some unique style.

Commerce is booming in Soweto, from manufacturing industries to mom-and-pop corner stores. We lunched at a traditional restaurant called Sakhumzi while being entertained by some exceptional singers and dancers. “Sakhumzi” means “to build” or “builder” and is the perfect way to characterize Soweto, today.

But it was the power of the museums of the area that everyone will remember. Of course they all focused on the oppression of apartheid, so it was a rather heavy tour.

In addition to the Apartheid Museum, we visited Nelson Mandela’s first home in Soweto, the Catholic Church in Soweto which was essentially the gathering place for everything political, and the Hector Pietersen Museum.

This museum is named after the youngest child (he was 13) of 600 students shot by police in the June, 1976 Soweto uprising.

I’ve been to all these place before, but it was also a very special day for me. This is the day my state, Illinois, votes in the presidential primary. The parallels of my country today with pre-apartheid South Africa are chilling.

Jan Smuts and J.M.B. Hertzog were both conservative Afrikaners (like say, Bush and Romney) who were ousted from power by a tricky mad dog, D.F. Malan, who like Trump rose to power on an angry and confused constituency. Malan once in power quickly crafted what became one of the most onerous, oppressive societies in history.

I really think it is a remarkable comparison. The realization sent chills down my spine.

Tomorrow we board the Blue Train, one of the most magnificent, luxurious trains on earth, for our 2-day journey to the Mother City, Cape Town! Stay tuned!