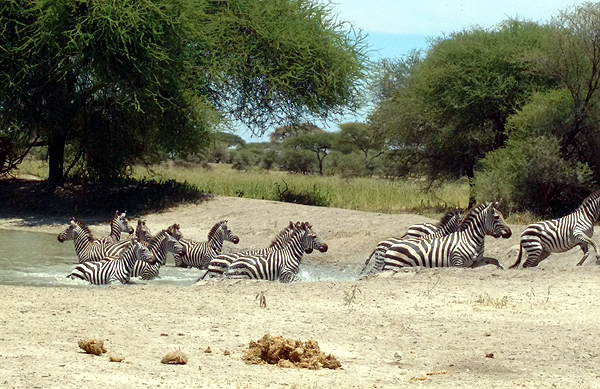 Climate change is not just hot and extreme weather, but peculiar weather. I walked into my tent in Tarangire National Park yesterday at 530p at it was 93½ F, about ten degrees above normal. Tarangire which should now be lush and green and fresh with blossoms is hot, dry and dusty.

But all over the place is water! The Tarangire sand river has running water! (It’s normal to be dry on top of the sand; water runs under the sand most of the time in Africa’s great sand rivers.)

There were ponds of water and wallows almost everywhere. My group had an exceptional introduction to amazing Africa as we watched for some time around 200 zebra race into a water hole, freak, race out, turn their funny heads back to the water in amazement there had been no lion or python, and race back into the pond! Again and again!

This strange situation, where the veld the temperature and air feels like a drought but the veld holds so much water, is precisely because in January and February there was too much rain.

This is really, really peculiar. Now the animals seem to be doing quite well with it. In addition to the hundreds of zebra, we watched with great excitement around 35 elephant saunter out of the river towards a very big sausage tree under which was trying to hide a very concerned lioness.

Ele don’t really see after they’re 12 or 13 years old, but their other senses are beyond belief. We watched anxiously until the one ele finally noticed the lioness.

The ele turned with ears out and flipped her trunk at the lion as if to throw a rock. After a single trumpet practically every elephant in view starting running towards the poor lioness!

She got away, of course, but she was very, very embarrassed.