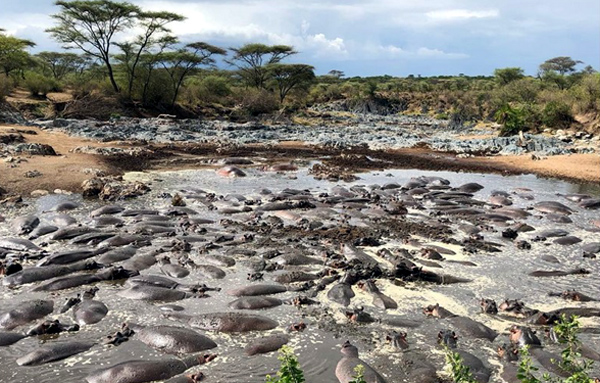 The safari ended at the most popular foreign tourist attraction in East Africa, Ngorongoro Crater. Greener than nearly everywhere else we went, the veteran safari traveler who organized the trip, Steve Farrand, said it was the best game viewing on the safari and the best he’s ever seen in the crater!

Steve’s assessment reflects the current “almost-drought” situation on the circuit and the unique advantages that game viewing has when the veld is dry. I wish it weren’t so dry. It shouldn’t be.

Most notably, dry conditions always increase experiences with cats. This longer than usual safari (18 days) saw 4 leopard, 37 lion, 5 cheetah, 2 servals and 2 wild cats. That’s fabulous, no question about it, but it’s far from a record, particularly with regards to lion.

Ten years ago we would have seen twice as many lion. Moreover, I think we witnessed first hand an historical change in wild lion behavior that’s probably linked to the radical decline in lions across the continent:

In the Mara, Samburu and the Serengeti, local guides who visit the area lions daily explained that two or more prides are now consolidating creating mega prides of 30 or more individuals.

This is fascinating, weirdly similar to what happened with elephants 10-15 years ago, and more than likely corroborates the serious threat to lion populations already identified continent-wide.

Traditional lion behavior included pride territories that were fiercely defended and while these territory sizes varied from place to place, they rarely resulted in prides of more than a dozen to 15 individuals.

Exceptions to this rule appeared first in smaller wildernesses and wildernesses that were heavily visited by tourists. The Mara’s famous Marsh Pride, star of numerous filmed documentaries, often exceeded 20 individuals. But until recently that was the exception. It now seems to be the rule.

More than a decade ago we began to experience the consolidation of elephant families, once the most aggressively characterized territorial units in the animal kingdom. Traditional families of 10-12 individuals maintained a one- to two-mile interval with the next family.

In Tarangire as is now “normal” this safari saw elephant groups that approached 300 individuals. Rarely did we find single families and it’s becoming increasingly difficult to define individual families in the crowds seen.

I believe that dryness exacerbates this situation, creating amazingly dramatic scenes as you can imagine. This modification of traditional behavior must be very stressful to the animal, because it’s happening so fast. That results in more fighting, vocalizing and other memorable behaviors like forced play between youngsters of different groups.

Yesterday the Kenyan government announced that more than a million people were in imminent danger of starvation in the northern third of the country where the rains have failed and local communities are expanding because of the discovery of oil in the area. This safari traveled in areas just south of that danger zone.

Climate change and human development dog the wilderness like nothing else. One phenomenon is bad and one is good but both are powerfully consequential. I realize too intensely that someone like myself who has visited the African wilderness for so long must guard against the nostalgia of original, initial experiences in a more placid time.

No wild animals in East Africa expect food relief. Instead we photograph and watch the consolidation of behaviors, the weakness of animals of the sort we saw in baby wildebeest near the Maasai kopjes, the stress of 70 hippo crowded into a shrinking pool of water as we did on the Grumeti… and we marvel at the power if vindictiveness of Mother Nature.

The struggle for life is extreme every day among wild animals. It amazes us in the best of times. In these less than the best of times it forces me to think of the people in northern Kenya and I realize that my inexplicable passion for the wilderness is challenged by the very explicable urgency to do everything possible to mitigate a future of increasingly horrible, extreme clashes caused by climate change and rapid human expansion.

People first. Animals second. But my wildlife experience in East Africa is too intense for me to feel satisfaction if inspiration viewing the painful struggle of wildlife, today. I know what I see happening to wild animals has an analog to all living things on earth, especially my fellow man. There’s little gratifying in that; it’s a disaster that’s already happened.