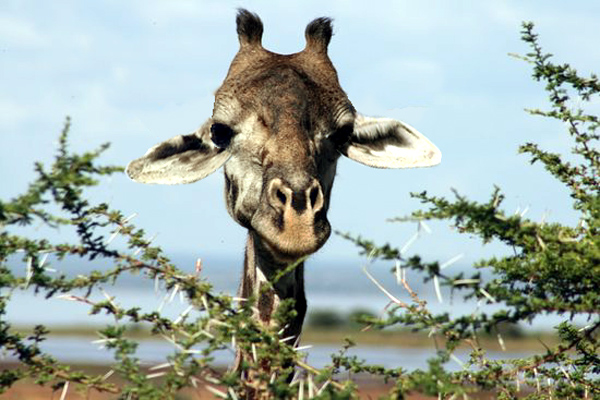 The Old Man Giraffe was all alone. Easily stripping the delectable little acacia leaves from the healthy branches, his old tongue only occasionally got stuck on one of the thick thorns the tree used to try to deter him. In fact he had his choice of dozens of blossoming trees! He was the only giraffe we saw all morning long in Lake Manyara National Park. We usually see 20-30.

It’s been unnaturally hot in northern Tanzania. Very heavy rains in January and February raised the water table so high that even now after a month of hot and dry conditions of the sort only old men could remember, the north end of Manyara near the dwindling lake was still very green. The acacias, mahoganies, rhino-ribs, podocarpus and 40 other kinds of trees still stood tall and healthy.

But the great lake had shrunk to half its size and had begun to smell putrid. The fields of grass were clipped to the dirt by starving hippo and the few wildebeest that were left. The few buffalo we saw lingered in the last bits of caking mud at the edge of the lake.

The younger, healthier animals including most of the giraffe had walked up the steep Great Rift Valley escarpment not for food – there were plenty of succulent healthy leaves on dozens of kinds of trees and bushes near the lake – but for water. The lake was now too salty to drink: the millions of flamingo that normally decorated its waters were gone. The fresh water streams that fed the lake had shriveled up.

But the Old Man Giraffe couldn’t walk up the escarpment. Laden with a past that had heroically defeated the wilderness he was now terribly arthritic and his neck was beset with the tumors that often besiege giraffe. He’d lost muscle tone throughout his body that kept younger giraffe’s ears vigilant in the air. His hung limply almost onto his cheeks.

So he ate normally, filling his first stomach with fresh acacia, transferring it to his second stomach and then chewing his cud languidly. But he chewed slower and slower because was becoming more and more thirsty.

Down a hidden bath between the sodom bushes he smelled something through the heavy heat. Only two strides and he saw a mud pool that wasn’t totally desiccated, cracked and charcoal grey. With another stride through the bushes he smelled the last bits of moisture in a part of the hole that was almost glistening. It was worth a try.

Looking around less than he would have as a gallant young buck, he forgot that his ears draped down. Had he been younger, he would have heard the unnatural crackling of the dry grass not harmonized with the hot breeze. So he spread his legs painfully apart knowing he risked a fall. But the resolve that had taken him successfully for more than 15 years through the wilderness kept him steady, and slowly he lowered his great neck towards the bit of black shine.

As his scarred tongue reached out for the last drips of water the lions attacked.

Yes, it was midday and lions hunt usually at night. Yes, a giraffe is a mighty challenge even for the greatest of killers. But this one beautiful young male, his mane only now starting to grow, dug his fangs into the Old Man Giraffe’s neck perfectly, exactly puncturing the 2-valve mini-heart halfway up the giraffe’s neck that keeps the blood from draining down.

It wouldn’t have mattered if the Old Man Giraffe’s old 2-valve heart was working like a youngster’s, the young male lion’s precision kill was too exact.

Within seconds four other lions were tearing the Old Man Giraffe apart, swallowing a kilo or two of meat at once. The young male who made the kill didn’t start eating yet. Instead, he squeezed harder and harder as if to strangle the already killed animal, not understanding that this time that wasn’t necessary.

We saw the pride that had killed a giraffe on my last safari in Manyara several weeks ago. They were draped over low hanging branches above the ground heat, their fat bellies hyperventilating with their feast. You could tell they were aching and uncomfortable. If they didn’t flood their bellies with water soon, their whole system would freeze up, killing them. But they were strong if overconfident, irritated by the unnatural heat.

So shortly after we left when the curtain of night fell over the ridiculous heat, they probably ambled out of the trees, their bellies swinging to and fro as they easily ascended the steep escarpment in search of the ponds that still twinkled in the starlight, dropped by the torrential February rains.

Then after drinking gallons of fresh water, they’d flop over at the side of the pond onto rocks and thorns as if it were a featherbed, falling into a deep sleep that even the morrow’s devastating heat wouldn’t disturb.

A few days later they’d be back down in Manyara’s parched veld for their next easy meal.

(Thank you, Sylvia Berman, for reminding me that the magic of Africa is found in its stories.)