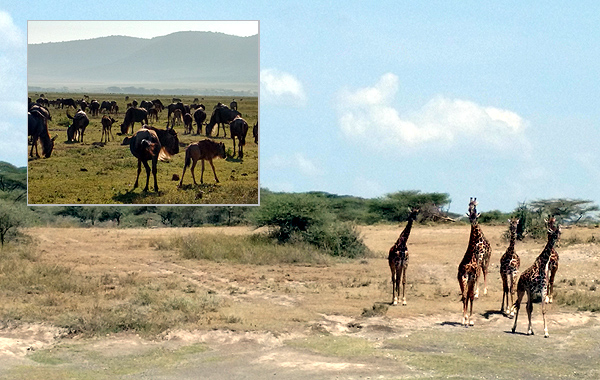 I don’t know why a hunter hunts. I have had very close friends and business partners who were hunters, and I’ve listened to them quietly and for long periods of time as they describe almost existentially “the chase” inevitably concluding that it is a first principal of homo sapiens to conquer all else living.

I’ve heard them wax about the raw wilderness and how a hunt requires them to understand its most intricate devices or succumb to failure. They speak of the beautiful mornings and operatic sunsets, the great expanses of landscape and endless sense of freedom that arises from “communing with nature.”

I don’t think they understand the wild.

We are on a hunt, a hunt for if not the locus of the great migration a better understanding of what happens to it in this unnatural weather, in this age of climate change.

Animals and especially birds seem to be adapting a lot better than humankind to climate change, which gives me hope that Richard Leakey’s 1980’s prediction in his book Sixth Extinction: Biodiversity and its Survival is not true: mankind will not destroy earth, although it may destroy itself.

Our hunt destroys nothing. It simply searches and observes.

Historically, normally, most of the great herds would be in the southern grassland plains of the Serengeti, anywhere south of a line from Ndutu to Lemuta. Year after year this is where I’ve found them.

Not this year. We have searched east to west in Seronera, through the Moru Kopjes and only a few thousand here or there are to be found, and they aren’t a pretty sight. Newborns have had to run with the small herds hither and yon, and when they have found grass it isn’t as nutritious as that which would grow on the southern plains if it would just rain.

So the mother’s milk won’t be as good. The youngs’ chances of survival are greatly compromised. On the other hand, bad grass is better than no grass.

Today on top of Naabi Hill I surveyed a huge section of the Serengeti for 360-degrees. Tiny little groups of wilde strung themselves along patches of green. A couple files were moving north towards where we’ve experienced heavy rains the last few days.

So where are the millions? How can millions disappear?

By the way, we’ve had great game viewing! Lion viewing especially always improves in dry conditions. I lost count several days ago but we’re probably up to around 40. We saw a family of 8 this morning devouring an eland that they’d taken down last night. The eight adults were augmented by three young cubs about a month old that we finally saw frolicking in a bush near their mother, who was hyperventilating off her feast.

We’ve seen an enormous number of giraffe, and I can only presume that’s because the high water table and occasional rain has kept all the acacia very healthy. The tiny leaf that threads itself between imposing thorns is the giraffe’s favorite food.

And, of course, thousands and thousands of Thomson’s gazelle. They don’t need to drink and they eat roots, dead or alive. We’ll see them when the veld becomes a dust bowl.

So stay tuned as we continue our hunt. Whether we succeed or not, we won’t be removing a single living thing from this intricate, complex and beautiful earth!