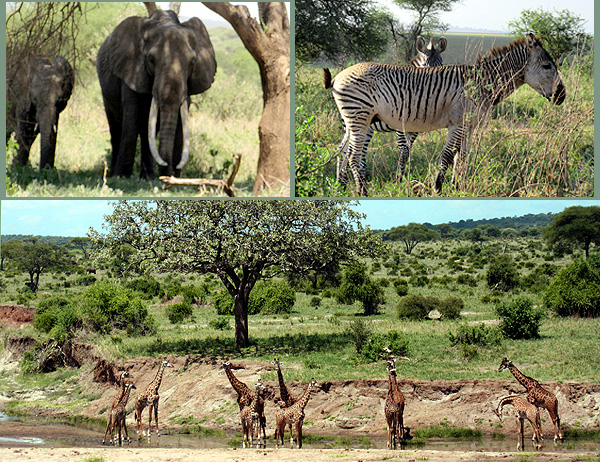 It was hot and we’d been on the road for nearly eight hours. The numbers of elephant and giraffe and other animals we’d seen in Tarangire was stunning but we were almost at camp and it was time to hit the showers and go for sundowners when…

…Tumaini hit the brakes and dust flew all around us like an explosion. When it settled, hardly ten meters away was the biggest lion I think I’ve ever seen.

Tarangire is not known for its lions, although we usually see at least a single pride. The lions are also not the prettiest. In hot environments lions tend to lose much of their mane and often looked scraggly. That was not the case with this monster whose grand frocks were the size of a whistling thorn tree!

He sat sideways to us, his fat belly slipping towards us on the ground as he panted uncontrollably. This was clearly the sign of having recently killed and gorged himself. That has a singular effect on making a lion look big. A lion can whoof down a quarter to a third of its body weight over a half day of feasting.

Having stuffed themselves to the extreme, the lion then have to flood themselves with water or their digestive track grinds to a halt. Clearly he’d done so, because there was no evidence of blood on his face.

So we backed up slowly and got far enough away that we could turn into the glen and try to get to him from the other side. In so doing we saw the pond at which he probably killed.

But then… There was another one. Equally as big and magnificent all of sudden lying in the ground directly facing us. Tumaini hesitated, began to move slightly off to an angle when lion-2 wiggled his hips in precharge.

The kids flattened in the seats and Tumaini threw the car into rapid retreat.

I don’t remember seeing such large lions, at least for a very long time. I thought about it for a long while and decided that each approached 450-500 pounds, which for a standard male lion is at least a third bigger. Of course of that 500 pounds, 100 could be hunks of meat slapped together in his aching stomach but even so, this was amazing.

We’ve had an outstanding time in Tarangire. Of course there were hundreds if not a few thousand or more elephant. I was specially pleased to see some with such large tusks, real evidence that they are fully recovering from the near decimation of the 1980s.

We also found a really weird zebra. Every once in a great while I’ve come across unusually colored animals, like the white wildebeest we found near Ndutu or the grey lion family we saw near Olduvai.

This guy looked like someone had white washed him, taking out most of his stripes and leaving thin lines and spots. It didn’t seem to matter, as he was fully a part of the group and apparently we were the only ones who thought him odd!