The struggle to retain a real adventure spirit in safaris, today, is no better illustrated than in our experiences in Tarangire and Manyara.

Tarangire is the best elephant park in Africa, period. The population is healthy, increasing in numbers and so the only controversial question is are there too many elephant here?

So everyone wants to come here, and that means “crowds.”

We entered Tarangire at the north gate where most everyone does. The car park was filled with about 30 vehicles and because of new entry forms, things were agonizingly slow.

Once inside we were in a line of vehicles all headed for the reported lion. When we got there, we jostled for position and could barely see the mating pair under some bushes about 150 yards away.

From there we went to the Matete Picnic Site, one of the most spectacular lunch stops in Africa! Set on a ridge above the Tarangire River, the landscape of bushveld punctuated with towering doum palms and the twisting Tarangire sand river outlined with elephant is really outstanding.

But lunch is a battle. I jump out of the car to secure one of the 30 picnic tables from all the other tourists trying to do the same, and then Tumaini comes down with the lunch and we move into guard mode, keeping the vervets at bay. Vervets are pests everywhere, but given the hundreds of people who flow through this picnic site every day, it’s thieves’ heaven.

You’ve got to see the northern sector. It’s filled with so many elephant and the scenery is so beautiful, but I weigh this against the need for “adventure” so move south as soon as I can. Forty-five minutes later near Tarangire Hill we’ve shaken most of the tourists and are entering some really wild parts of the park.

The elephants especially are wilder. We can no longer just drive at will past a group of pachyderms. We need to assess the collection to see how habituated they are, how moody they might be that day. Normally we then sneak past them slowly enjoying an exciting few minutes together. Sometimes, though, the added stress these ele must feel with such an overpopulation breaks out, and they trumpet or even charge.

I can usually predict that, as I did when I told everyone to sit down when I spotted this one youngish male with a torn ear looked specially anxious. He trumpeted and flapped his ears and we duly left.

The camps I choose to stay at are in the south, away from the crowds. There are several and they’re often some distance from the action, but the exclusiveness retains that all important “adventure” spirit. You wouldn’t find an ele trying to use the pool in the lodges in the north! (See photo at the bottom of the blog.)

Every time we went out on a game drive we had fabulous elephant experiences: youngsters wallowing in a mud pool, big males trying to chase us away from the family they were courting, old mothers trying to collect the family to move on… It’s truly supreme.

The next park on the circuit after Tarangire is Lake Manyara. When I think back to the old days and how important this park was for elephant research and how abundant was the big game at every part it makes me a bit sad. The park is extremely heavily used, now, mainly because new and better roads make a day-trip from the metropolis of Arusha easy to do.

Like Tarangire’s northern sector, it’s crowded. So why even go?

Because the biodiversity especially of the trees and other plants is exceptional. There are more species of trees in Manyara’s mere 35 sq. miles than in most of the Midwest. The spectacular lake – one of the Rift Lakes – attracts birds by the millions. (According to 10-year old Evan we saw 17 million flamingoes. I think it was closer to 100,000!)

What I do is leave Tarangire on little used roads in its southern sector. These go by Lake Burungi and what a surprise it was to find so many zebra and wildebeest there! A real bonus.

We then head out over rural Tanzania, and it’s really interesting to see the country’s developing farming. It’s also terribly controversial, because it’s all powered by a dwindling amount of water from the lake.

We then enter Manyara’s southern gate. According to the rangers there only about 10-15 tourists do this daily. We then follow the lake the entire length to the northern part. It only becomes crowded in the north.

So for the time being we’ve figured it out. We had a wonderful three days in Tarangire and Manyara and much of that was just our own selves and vehicle and vast wilderness all about us! We’d definitely retained “adventure.”

I worry about all the new lodges and camps the government has approved for my secret “adventure” areas, but they may not prove viable. You’ve got to commit to being on the road a lot longer, and I’m afraid willing to spend a bit more, to see the best of these great parks but not be a part of the crowds.

Now onto my favorite place in the world: the Serengeti! 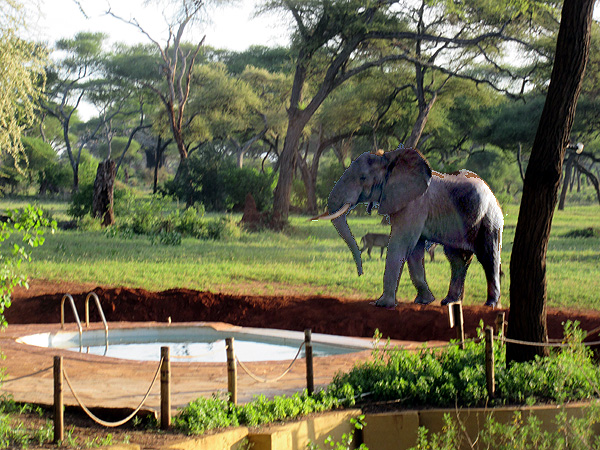