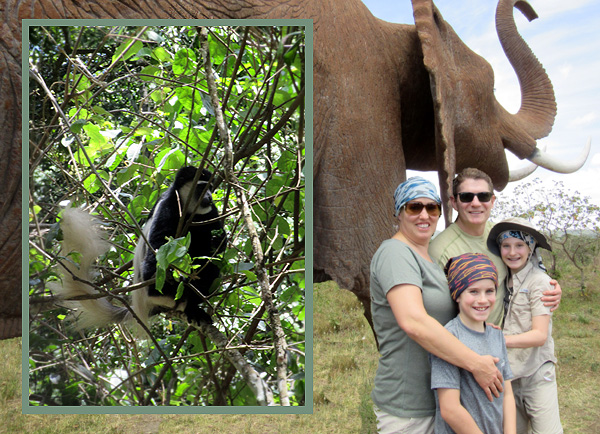 After several days to recoup from the long flights, at no better a place than Ndarakwai Ranch in the foothills of Mt. Kilimanjaro, we headed into nearby Arusha National Park.

Evan Lavallee expressed typical ten-year old sentiment when he told the manager at Ndarakwai that he’d like to stay longer! The Lavallee’s had fed the bushbaby at dinner, seen a large variety of game on the drives around the 11,000-acre ranch and walked to the edge of a butte for a view of nearly 100 sq miles of West Kili veld.

Nights were a bit noisy in our tents since it was a full moon and that often confuses the birds! It was a wonderful sleeping situation otherwise, because temperatures dropped into the mid 50s at night.

The backroad drive from West Kili into Arusha National Park is hardly an hour long and actually got us into the park before most of the daytrippers coming up from the city.

We toured the Momela crater lakes first, proving the park’s nickname, Giraffic because there are so many giraffe. The family added waterbuck to their growing list of antelope and saw their first buffalo.

But the park’s prize, the rare colobus monkey, put on an extraordinary show for us! In two different locations we watched around 30-40 of these gorgeous white tailed-leapers, feeding, playing and leaping! Several times Evan and Sophi got videos of the leaping. Mom, Tammy, who spotted the first set high in a mahogany tree got wonderful shots of the very young babies being hand strapped to the mother’s breast even as the mother leaped 40m from treetops!

So it was a successful morning ended with a picnic lunch overlooking the vast Meru crater.