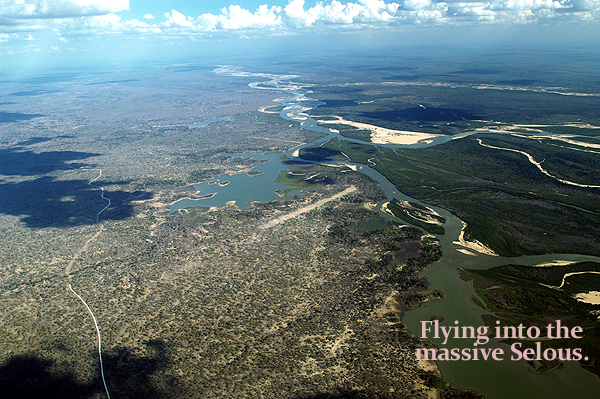 OnSafari: Going into the bush, again! A wonderful small group of people, and joined for part of the time by the most important person in the world, my wife!

We’re truly heading off the beaten track to the sand rivers of central Tanzania and Zambia. How will this differ from a more traditional safari in East or southern Africa?

First of all we’re likely to encounter fewer animals overall, but more kinds (species) of animals. This is because we’ll be far removed from the popular and heavily used game parks that abut newly developing areas in northern Tanzania and Kenya, and the eastern “Transvaal” of South Africa.

That human/wildlife conflict that flares so often on the periphery of the great, traditional parks buffers wildness from seeping into the human populated areas. When wild animals and their habitat is more seriously confined, they tend to accelerate their own survival behaviors and this increases the ecosystem tensions.

What this has meant in places like the Serengeti or the Kruger area is that herbivore populations are exploding. In Kruger they cull. In East Africa they do nothing, but in both cases it tends to put at serious disadvantage many smaller animals and animals with fewer numbers to begin with.

I think several species of antelope provide the example. Both sable, roan and oryx were once seen regularly in the big parks, but they are no longer. This in part is because the exploding populations of the more common antelope like wildebeest and partner species like zebra have simply squeezed out these more specialized antelope. I hope to see some of these on our safari, now.

Now don’t jump to too many conclusions! The Serengeti is still my favorite place in the world. It is normally these big, popular parks that a first safari should choose to visit.

But many factors should be considered in deciding where to go, and where we’re going is little seen, very very wild and with great biodiversity. Perhaps most importantly of all, it is a cohesive group of friends with similar hopes and anticipations.

We start in The Selous which vies with Etosha Pan of Namibia to be the largest wildlife park on earth, exceeding 20,000 sq. miles. This is the same size as Massachusetts, Connecticut, Rhode Island and Delaware combined!

The Selous is mostly a giant wetlands, defined by great rivers which become sand rivers as they stretch away from the coast. What is particularly urgent about visiting The Selous is that one of the world’s largest hydroelectric projects is being built here. The great Rufiji River will be dammed up. No one is sure how this will effect this massive wilderness.

We then go into the center of Tanzania to the great Ruaha National Park, another massive wilderness with the lowest density of tourists in any of Tanzania’s major big game parks.

We’ll then have an exciting stint in Zanzibar before going to Zambia and visiting it’s most important wilderness, the great South Luangwa.