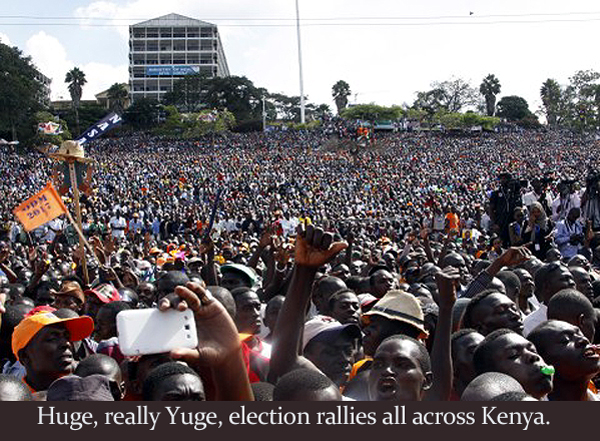 I’m in Kenya and you can’t walk out your door without feeling the buzz! Keep your eyes squarely here: It all happens on August 8. A national election that increasingly looks like it will be a major upset.

Kenyans have always been incredibly open people, and they are brimming over with optimism about this election! It’s not about their candidate. It’s what they think is about to happen:

Massive change in spite of the polls. Just like everywhere else whether the U.S., France, Britain, Romania or wherever.

And Kenya uniquely helps us to understand what’s happening all over the world. The only way any kind of significant change happens here is if citizen Kenyans dissemble tradition and vote for someone not in their own tribe.

The word, “tribe” is widely invoked even in western politics these days as a way of trying to explain why the polls have been so wrong. People stick with their tribal personage when answering pollsters. But when they get into that election booth traditions are blown to smithereens.

In Kenya “tribe” is hardly just an euphemism for party or ideological loyalty. It’s a very debilitating fact of everyday life.

Tribalism has kept Kenya from emerging into the developed world. Innovation and entrepreneurship just can’t flourish when business and social arrangements are constrained by tribal loyalties.

I’ve always been so amazed and frustrated with employees, friends and associates who miss one opportunity after another because they’re unable to ally themselves with someone outside their own tribe. I worked for years to assemble groups of employees of differing tribes, and it was a constant battle.

But I’ve lived long enough to see the miracle: Tribalism is definitely breaking down.

I spent a long time the day before yesterday talking to one Kamba friend who is in a particularly good situation to explain what’s happening.

Rogers’ tribe, the Kamba, is too small to dominate anything, politics or business. But exactly like the DUP in today’s conservative government in Britain, they can hold sway, and hold sway they have for decades!

In Kenya politicians attempt to divert attention from their tribal alliances in really laughable ways. It seems that with each season, a new party arises or an old party takes on a new name. We’ve had KANU, Rainbow, NASA, JUBILEE and dozens others in just a few years!

But underneath this diversionary script is tribal alliance, and that has never changed. The two largest tribes, the Kikuyu and Luo, have been at it since colonial times and even before that!

Rogers detailed for me, despite his youth, decades of power brokering by the Kamba. (And of course, other similarly small tribes do the same.) Sometimes they support the Kikuyu faction; sometimes the Luo, but always when it benefits them most. Alas, the Kenyan DUP!

But Rogers’ insight lies not in history. He thinks this time that young people are going to break ranks with their tribe, whether in the main or from power brokering. Why?

For the same reason it’s happening everywhere: youthful impatience with too slow change for the better, an impatience that can break down thousands of years of tradition.

In situ that’s lots of reasons: Many just vote NO, contrarians trying to shake up the place. Many thoughtful voters no longer accept politicians whose promises weren’t delivered. And despite our petrification over “fake news” Rogers believes Kenyans really can discern truth from lie, and they aren’t going to take lies, anymore.

Finally but not least, corruption. And that’s not just a Kenyan problem: The first substantial suit has been filed in Washington, D.C. against Trump for corruption.

We might summarize it all as no-nonsense voting. That may seem too benign a characterization for the turmoil that ensues, but it’s a reflection of a simple way to try to effect change: just get rid of all those bums!

In Kenya, if Rogers is right, Raila Odinga will beat Uhuru Kenyatta, the same way Corbyn outperformed May, or Macron trounced Le Pen, or Trump marginalized Clinton: it doesn’t matter. The incumbent is dumped.

Trouble is, as Rogers points out, the replacement isn’t always exactly what you want, either. So then the replacement will be replaced, and so on, until people hopefully get something that works for them before they blow the whole place up.

Well all I can say is, Power to the People!