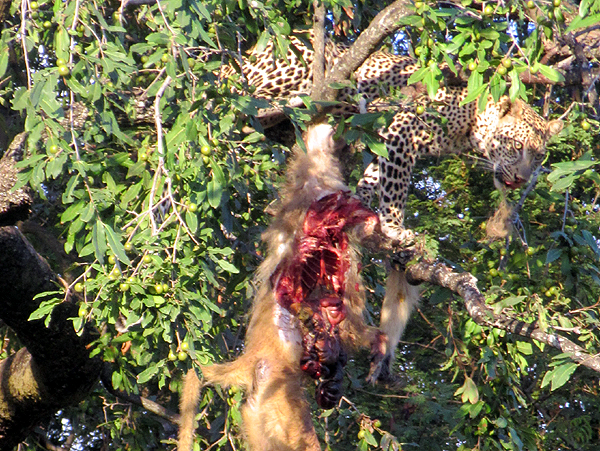 The Mwagusi and its little tributaries were dry, and this was early. The drought of last season, which had followed a devastating El Nino flooding, had broken but weakly. A major moisture deficit crinkled most of the bush leaves and had turned everything brown early. Only along the Great Ruaha itself, or in slight depressions in the veld, did the sandpaper trees and acacia flitter lively green leaves in the warm breezes.

But this made one giant tamarind tree on the embankment a perfect place for the dominant troop of baboon in the area. Its deep roots and self-shading had protected it from the drought and rejuvenated it from the light summer rains. It had produced abundant seeds, its leaves were still succulent green and its ever winding and gnarled trunks provided numerous places for the dominant troop of baboon to feel safe at night.

Every night since the rains stopped Big Daddy led his family up the old tamarind at dusk. It was a big, successful family for Ruaha. Nearly 50 members large, almost half were juveniles or sub-adults, and there were several newborns, frizzy black fur around and pink faces that dug into their mother breasts when our rovers came along.

The health and youth of the troop was a testament to how well Big Daddy led the group, particularly through such extended dryness when predation flourishes. And finding that beautiful tamarind tree which provided such safety, comfort and even food was another feather in his cap. I could tell all this the very first moment I saw him, sitting calmly among other not as big males who all seemed nervous and unprepared. But Big Daddy was calm as a cucumber, his big black snout raised ever so slightly at our oncoming vehicle.

We watched them for a long time. It was the first big troop my clients had seen. But we had hardly stopped the cars when all sorts of screaming and fighting broke out and continued intermittently through our whole visit. I wondered if it were us.

Besides the fidgeting elder males, a number of mothers with young were barring their teeth and hooting at any other larger baboon that came near them. I saw one grab an older juvenile from his play then slapping him to her stomach and storming away. Another large mother with a baby on her back actually chased a sub-adult male nearly her size all over the place.

So we left the screaming and hooting and continued along the dry Mwagusi’s river bank and soon came upon a single lioness plopped in the middle of the sand river. It was a beautiful scene, with tamarind and other big trees on either side of the narrow 25-meter wide river covering her mostly with shade, but the beautiful afternoon sunlight falling on her left flank raising that beautiful mottled tan color of a healthy lion.

And boy was she healthy. Her belly spreading on either side of her proved that! Our guide said she with three sisters had killed an impala the night before. She was still panting heavily, not hyperventilating as they do right after increasing their body weight by a third by stuffing themselves with unchewed hunks of raw meat, but still breathing heavily. She must have come down to drink, a necessity to facilitate digestion. The river looked dry to us, but undoubtedly at its edges were plenty of puddles of refreshment.

So after a few minutes of this near still-life we moved on along the bank. Ahead I saw three other rovers clustered at one corner of a giant tamarind tree. They were all looking down into the grass.

But Edith in our group was looking up: Directly to the side of our stopped rover, about twenty meters high and sparkling in the gorgeous afternoon light was a disemboweled baboon. It was partly eaten and hanging from its head that was wedged in the crux of a horizontal branch, the weight of its body pulling the lips off the fangs in its mouth.

It was a large adult male. Maybe it was Big Daddy’s number two, or number three or whatever. Its sudden loss would have rankled the troop that showed us so much anxiety. Baboon societies are very strictly ordered, and removing one tile from the family labyrinth thrusts them into fear and disarray. It will take days of fighting to create a new order.

The other three cars were watching the leopard in the grass, but we turned out to be the lucky ones. Just a few minutes after we arrived the 13-month old male leopard appeared beside our car then climbed up the great tamarind.

He was a beautiful cat. For one thing he was still young, perhaps two-thirds his final size, but as a result lacking the wounds and scars that ultimately decorate the face, shoulders and flanks of an old cat. But it also meant that a leopard’s normal routine of pulling prey three times its size might still be a challenge for him. He’d probably waited for last night’s full moon to set, then made the kill while the troop was still asleep in the tree.

Big Daddy could have easily chased him away, but in the dark and mayhem that must have ensued, Big Daddy would have led the retreat as fast as possible.

Sunset was coming and the persistent heavy clouds that had lingered in Ruaha as if to try to extend the light rains captured and expanded the awesome yellow light onto the leopard’s exceptional coat. As the sun peeked below the clouds, the leopard, the tamarind and his trophy kill exploded with color.

We watched the young guy often stop eating to try to rearrange his quarry. I actually think he might have dropped it trying to pull it up even higher and out of such easy view. It was kind of comical, but finally he’d give in and just drop himself off the branch, eating upside down!

We stayed a long time watching this classic scene and left for our sundowners a bit late. We got to the plain of baobab trees backlit in the post sunset apricot and peach bands just above the horizon, with pastel blue streaks still racing into the sky touching the first twinkles of starlight. What a first night’s sundower! We all had G&T’s and raised a toast to Stephen Farrand, the man who had planned it all then so sadly had to cancel at the last minute.

But much more was to come. Stay tuned!