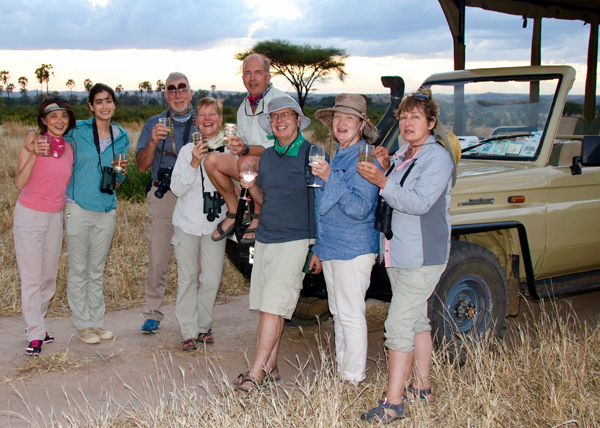 We just ended six days in Tanzania’s remote central game parks of The Selous and Ruaha. Zanzibar is not exactly Manhattan, but flying into here from Ruaha was like returning to civilization from a Jurassic Park time warp.

The entire massive area is defined by great sand, catchment rivers that drain nearly 100,000 square miles into the Indian Ocean. We spent almost all our time game viewing in Ruaha along the Ruaha, Mwagusi and smaller rivers. Here in this most remote wilderness the rivers are mostly sand and little flowing. Most of the landscape is dominated by expansive bushland not unlike California’s chaparral country.

We saw tons of impala and baboon, several cats, one larger family of buffalo, greater kudu and the prize, lesser kudu. We were fortunate on a night game drive to observe genet, hyaena, jackal and two civets.

Ruaha was where we saw our first non-frightened elephant, although many fewer than I’ve seen in years past. In three days we encountered only about fifty.

We’d encountered our first two elephant several days before in The Selous. They turned tail and ran through the forest as if we were ready to take them down. I haven’t seen such behavior since the late 1980s during the really horrible corporate poaching that decimated the population before CITES was created and put a stop to it.

Most of Tanzania and Kenya do not have a serious elephant poaching problem. I’ve written numerous blogs, in fact, on my belief there are too many elephant in these northern areas, today.

But that isn’t the case today in the southern half of Tanzania where some reliable reports suggest as much as a third of the elephant population has poached out in the last decade.

Ruaha is another 200 miles west of The Selous, a quantitatively greater challenge for poachers who must deal in Dar’s black market, than poachers working The Selous.

The Selous is hardly 80 air miles from the coast. Here the sand rivers have organized and converged into strong, flowing waterways. Our Selous’ game viewing was dominated by the Rufiji River. Every bend was chock-a-block full of hippo and croc. In fact a dead hippo not far from camp had just “popped.” Not even the crocs can penetrate the hide of a hippo, so it bloats until it breaks. When that happens the whole river seems to shake.

Kathleen & I watched from our verandah one morning giant croc after giant croc methodically swimming down the river towards the carcass. It was actually eery and at the same time rather beautiful as the big reptiles left a long single wake in the river sparkling with the early morning sunrise.

In both game parks the dominate creature was impala. They seem to adapt to the new era of extreme weather better than any other antelope. I imagine in the six days of game viewing that we saw more than 4,000.

I’m sure everyone on the trip agrees that finding the young male leopard and his recently dispatched baboon was a highlight of our visit to Ruaha. Leopard are finicky creatures, usually very shy. This one wasn’t at all, and that gave us the ability to watch him closely and return each of three days.

Clearly he wasn’t spooked by the vehicles, and there were usually more than a couple vehicles clustered around the tree watching him. That’s still far fewer vehicles than would cluster around a tree with a sighted leopard in the north, so perhaps that answers the question as to why he seemed so accommodating.

Our lion experience in Ruaha was fascinating. In the area we explored there were four sisters in the central pride, and we saw the first one hardly a half hour into our first game drive! She was in a dry river bed with a huge belly filled the night before with impala.

Later we saw two of the others. The oldest was a magnificent female, very large, and all beaten up. She carried many scars of the battles she’d fought in this harsh environment. Her right shoulder looked like it had once been dislocated. Her face was covered with gashes, as were both flanks. Her left ear was torn almost in two.

She was also sick. Some awful protuberance hung from her belly. But her anxiety came from none of these normal in-the-wild consequences. She was followed — I’d say harassed — by an even sicker young male lion.

Our guides explained that lion had appeared from nowhere. It was hard to tell his age, because he was so sick. His coat was mangy and almost as thin as a rod. Clearly the three lioness had refused to share any of their kill with him.

The old lady lion was constantly growling at him, barring her teeth at him and rolling her head, but he never went away. When she stood up and moved, he followed. It’s hard to say if they will ever accept him.

However harsh these remote and dry lands may be, we ended our time here on a game drive of renewal. We watched for some time the ritual mating of one of the lioness and a magnificent, healthy male. The guides said three males live together, but outside the pride of lionesses, coming together only to breed. We were likely intruders of their last of three days of courtship.

There’s a harsh remoteness to central Tanzania that you won’t experience in most other game parks in the continent. The climate was always extreme, but now even more so with climate change. The human/wildlife conflict manifest in poaching is worrisome and visible. But the treasures of seeing rare animals like the lesser kudu and the extraordinary near interaction we had with the developing life of a young male leopard are unlikely experiences in the better known and more easily visited parks.

On to Zanzibar! Stay tuned!