Skip to content
Most travelers choose their destinations for a basket of reasons including everything from famous museums to beautiful scenery, deep history to culinary delights. A few just want to tick off another destination.

I think the six of us came to Rodrigues because we all love Africa, and this is the most remote and unexpected part of Africa that exists. Like any Robinson Crusoe island hidden in the giant oceans, we also expected very unique beauty, history and ecology. We weren’t disappointed.

Relentless 30+mph winds rattle and bend everything, even under a cloudless sky shimmering above an azure sea. Gigantic surf, 20-foot high waves break over one of the healthiest coral reefs left on earth. Bats the size of dogs swoop over miles of white sand. This is Rodrigues.

Tiny Rodrigues is less than 40 sq. miles large. The nearest continental landfall is Australia, 3300 miles away. Only 1½ million years old, it is the smallest inhabited atoll in the obscure Mascarene Islands created by violent, new volcanism erupting from some of the deepest parts of the ocean.

The beauty was exceptional. “Winter” is just beginning so the hillsides are still lush green. There are many beautiful, airy if small pine trees bent by the gale force winds. Deep black basalt forms sculptures on the white sand. And a simple walk along the beach shows the exceptional litter of a healthy coral reef.

That reef is huge, surrounding the island like an eye around its pupil. The seas are inside the reef are transparent and azure. The deep ocean outside the reef is darker and forever turbulent.

This is the perfect place to understand evolution. A lot of people, I think, take evolution for granted; it’s not as easy to understand as you might think. You have to grasp enormous spans of time. Evidence is mostly forensic history.

And the more remote an island is, the easier it is to grasp evolution.

The Mascarene, which include the much larger Mauritius and Ile de la Reunion, are all relatively new and extremely isolated. What still lives on them and what their historical record shows includes the dodo and giant giraffe-necked tortoise.

Plus lots of other weird and unique creatures, even including a large number of endemic marine creatures, which attests to how dangerous the seas around them are.

Rodrigues’ flightless bird, the solitaire, and its unique giraffe-necked giant tortoise are long extinct. In such a small place as this it took many hardly a generation to wipe them out. But the people who love Rodrigues are trying to make up for it. The island is composed mostly of coral and volcanic debris, but in the southwest are some remarkably deep limestone caves and karst canyons in which more than 2500 giant tortoises are being protected.

The second giant tortoise left in the world after the Galapagos is the Alhambra Tortoise and while it doesn’t live here, what better place to protect it than on such a remote island? The Seychelles from where they originate is reaching a state of over development. Rodrigues is the perfect place to rescue and nurture these giant but fragile beasts.

The wind never stops sweeping onto this little atoll. During our last night there was a terrific storm that rattled our rooms and rearranged the bits of outdoor furniture at the hotel. It didn’t last long, but both Roger and Jerry woke fearfully, thinking it would wash us all away!

By morning the colors of sunrise blasted onto the azure seas and the skies cleared. We left the island reluctantly as the winds jiggled our small aircraft taking off. Clearly we might never come here, again. But what an experience to cherish! 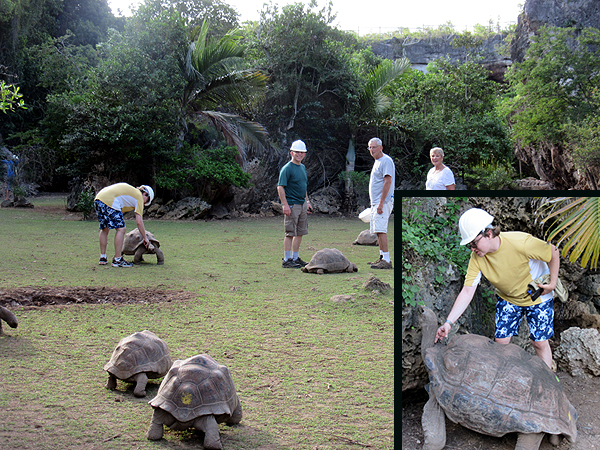