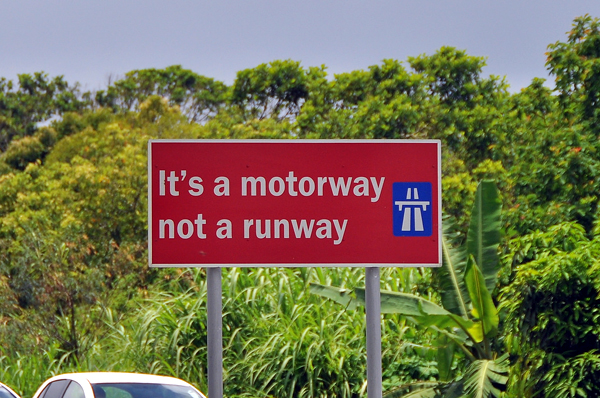 Look on the bright side: Driving in Mauritius is like being the first astronaut to drive on Mars. Yes, there’s problems. It’s costly. But what an adventure.

I’ve raced my broken Landrover over the Lemuta Plains through a dust storm and avoided every aardvark hole. I’ve navigated through a blizzard in the middle of the night on Chicago’s highways. I’ve kept my Vauxhall on the right edge of the ditches in the Scottish moors. I’ve even zigzagged a bus on the Chapman’s Peak Road over the Cape!

But this was a first: My Peugeot in Port Louis.

One should first be leery of places where all the road signs are in a language none of the people who live there speak. This is Mauritius. The official language is English. Not English and French or English and Creole, just English. So signs on the motorway are in English. But few Mauritians outside of the tourist industry speak English.

Well, then, there’s French. So you assist the car rental agent trying to locate the appropriate insurance boxes on the sudoku car contract with a “Puis-je vous aider? Monsieur?” and solicit a wide smile. But then when you can’t find the boxes you were searching for, it is explained:

“You cannot buy Mauritian car insurance for theese rental cars in the US.”

No, but I did it online.

“That eese thee US.”

So in addition to my useless car insurance bought in the U.S. I now purchase gobs of new mandatory car insurance because, it was explained to me, “All tourists crashes.”

That was a challenge. However, with due respect to my increased age and fraility of mind, I asked if they had GPS that I could rent. It was explained to me, no, they do not have GPS but they do have Tom-Tom.

I know Tom-Tom well. It is the South African version of Garmin and frankly, I like it better. So fully armed, off I went.

It is essentially a straight 50k road from the airport to the capital, Port Louis. There are about a dozen roundabouts, all well signed in my language, and 5 stoplights that create color in this otherwise verdant, jungle landscape of sugar cane and skyscrapers. They seem to have no other use, since no one stops or goes in any pattern related to their changing colors.

There are two choices while driving the M1 motorway where frequent signs try to point out to users they are not on a runway for jets. The first is to get into the right-hand lane of the dual lane carriageway (remember, we’re driving on the left-side here) and try to keep up with the Benz and Landrovers that rarely decelerate below 100 miles an hour. They probably go faster, but those are probably already in the sky.

The second choice is to take cover behind a truck on the left-hand side. They go much slower. This is not true of public buses which despite their size are right-lane participants. But most trucks are mostly broken and can’t go fast.

The problem here is that you become engulfed in black soot, which impedes your ability to stop quickly when the truck loses its right front tire and screeches to a halt.

Tom-Tom was pretty unnecessary, since the signs were so good, but once in the city of Port Louis Tom-Tom was crucial. Port Louis’ inner soul is a miasma of tiny, crowded streets all darkened in the shadows of the grand skyscrapers that somehow rise in their middle everywhere. Cars park on both sides of the tiny streets often making driving through them impossible, especially when confronted with a car coming from the opposite direction. The situation is further compounded by bicycles, motorcycles and throngs of people.

Nevertheless, I prevailed, but I was relying more and more on Tom-Tom, because there are no street signs, or if there are, they are obscured by people, the sides of turned over buses, or flashing neon billboards.

So when Tom-Tom said turn, I did. Tom-Tom turned me into a one-way street and bam, I took off the rear view mirror of a Benz.

We came to a final settlement that included the owner escorting me to my hotel. There I called AVIS and was told that recently Port Louis decided to reduce “tourists crashes” and other car problems by making various streets one-way, and Tom-Tom didn’t know that. Yet.

Oh, and my gobs of Mauritian insurance would not cover damage “caused by yourself, Monsieur.”

I tried to argue it was caused by Tom-Tom. When I limped back to the agency the next day he was smiling and laughing, “That was a very good American joke!” What? I demanded the closest I’ve ever come to committing an international crime.

Dust storms in the Serengeti, Scottish swamps, Cape cliff-hangers, Chicago blizzards – a cinch. But in a category all its own: the Malicious Motorway.