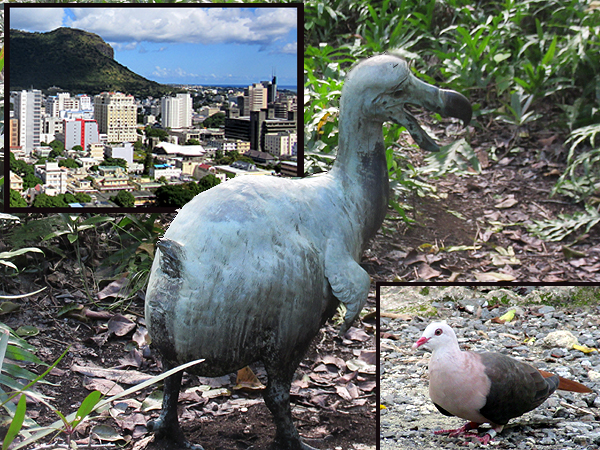 More for man, less for animals? More for all men, less for those at the top?

This moral rationing has defined Mauritius for four hundred years. Our three days here only increased our agony in having to make such choices.

The dodo was mostly wiped out in 30 years. After that its numbers were not large enough to reverse extinction even had their been a will to do so in the 18th century.

It was wiped out because it was a source of meat for sailors. There was no alternative at the time. Forward thinking explorers dumped many goats and cows onto the island so that they would breed into a future source of protein, but the dodo capitalized the time that took with its existence.

It’s arguable that had there not been this docile, chubby source of protein, Mauritius would not have been able to service the far sailing vessels of olden times. The “Enlightenment” would have dimmed. The industrial revolution would have been delayed, perhaps stalled.

There would have been a dodo, but no Apollo mission.

I think it rather haughty the way many of us tend to conceive of the dodo and giant tortoise (and many other species) extinction as something perpetrated by drunken, amoral bluejackets off on a binge. Folks, they would have died otherwise. And after a few died, they would stopped coming here. The great crossroads victualization mall between Europe and Asia would have gone poof.

Of course Mauritius being so small and completely isolated until discovered by the early mariners, it had a rich island biomass found nowhere else on earth. Many Mauritians harbor guilt that 90% of their endemic species are gone.

We saw the amazing conservation efforts at Ile aux Aigrettes and the Pamplemousses Botanical Garden. At Ile aux Aigrettes Mauritians have spent more than 30 years trying to reconstitute a 67-acre island into what Mauritius once was.

They’ve had remarkable success. At one time there were only 9 pink pigeons left on earth. Today there are more than 300. Similarly for several other species of bird we were lucky enough to see in the wild.

The island is also propagating early Mauritius plants and trees, many saved just in the nick of time. Deforestation is no longer allowed anywhere in Mauritius, but that’s a very recent phenomena and nearly 90% of the 90% of endemic species lost here were plants.

Sailors did harvest teak to repair their ships, but the vast majority of plant species lost fell in the domino game of extinction. Without tortoise to disperse seeds, hundreds of plants went extinct.

And finally, the island like its little faraway cousin Rodrigues, is rescuing and nurturing the alhambra giant tortoise.

The giant giraffe-necked tortoise was the Mauritian endemic. It’s gone forever, but Ile aux Aigrettes now breeds the giant alhambra tortoise. This species is endemic to the Seychelles, and the Seychelles is not doing much to save them. So, Mauritius will.

Then there is Pamplemousses, technically the Sir Seewoosagur Ramgoolam Botanic Garden. Developed by the James Bond of the 18th century, Pierre Poivre, it contains more foreign species of plants than Mauritius ones. Poivre developed the original Dutch purpose of creating a massive vegetable and fruit garden to service ships and turned it into a world tree preservation site. I think it’s very important to note this started just after the dodo’s extinction.

Trees, shrubs and lilies from every part of the globe have been painstakingly cultivated here, and the Mauritian climate seems to accommodate them all beautifully.

I wrote last week of the yin and the yang, or the battle if you prefer, between the haves the have-nots so concisely illustrated in Mauritian human history. What we saw in the last three days was a human attempt to reverse or at least ameliorate the negative results of the evolutionary yin and yang of earth’s astounding biomass.

As I said last week for human history, I don’t think this is possible for our biology, either. It’s important to try, because the longer we preserve the largest possible biomass the more we’ll learn from it, much less just the exuberance of experiencing variety. What I think will happen really already has in Ile aux Aigrettes and Pamplemousses: living museums.

But it’s not the way it once was.

As we travel through these magical remote island paradises and visit the custodians of the past we’re better able to imagine how it once was. The diversity compared to today is profound. But would we give up “today” to still have that diversity?