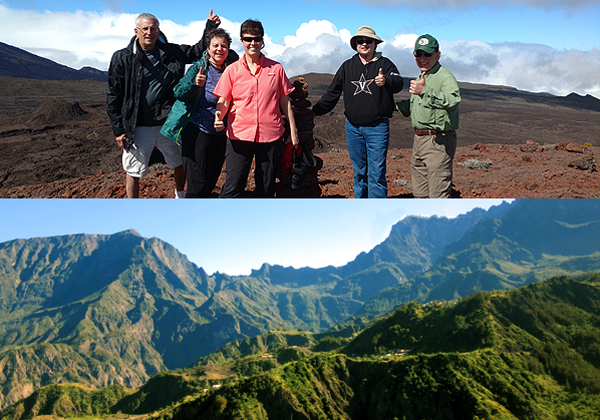 After nearly several weeks in the Mascarene, the remote volcanic archipelago of Africa defined by pirates has revealed its wonders to us, and they are grand!

The beauty is profound. The ecological health is unique, better than practically anywhere else on earth. But the greatest treasure is helping us understand evolution.

Rodrigues is truly your Robinson Crusoe escape. I remember Cathy and Daniel, Roger’s wife and son, when his office managed to get him on his cell. They hadn’t expected there would be a signal on Rodrigues, and it was quite laughable watching Roger navigate to the best signal, which meant leaning into the gale force winds at the top of the resort!

Rodrigues’ beauty is pretty much in your face, but it was the size of its coral reef, which was healthy and multi-colored, which enhanced the beauty manifold. And the efforts of its few tens of thousands of citizens to protect what’s left of its most characteristic heritage, the giant tortoise, that was most memorable to me.

Mauritius is like a control tower at O’Hare suddenly lifted by aliens and dropped into the middle of the ocean, where it rises like a Phoenix into a powerful society. There are so many conflicting feelings here, knowing that the State Department considers it one of the most corrupt places on earth.

That fractions of trillions of dollars move through here to be cleaned of their dirt and history is especially tragic when you see the Creole kid with holes in his shirt (and not like American teenagers, for style). And this spectacularly lush and beautiful island has lost almost all of its endemics and many of its introduced species, as man’s lust from teak to T-bills pushes nature aside.

But at the Ile aux Aigrettes we saw three individuals of the world’s rarest, most endangered birds, the pink pigeon. Here determined Mauritians work tirelessly to return at least a part of the island to its natural state. I wonder if that includes reminding authorities that indentured servitude was ended in 1928.

And some of the snorkelers right out from our beach resort saw so many coral reef fishes it was amazing, including the very threatened Picasso Triggerfish. So the story of Mauritius isn’t over. It’s a battle going on.

Reunion’s beauty is hard to beat. I’ve been a lot of places, and I think that in terms of first impression, surprise glee, I felt that Alaska had it hands down. Today we went to Cilaos; yesterday to the island’s grand volcano, the Piton de la Fournaise.

Those two excursions challenge Alaska’s primacy for explosive natural art. Like Alaska there are towering mountains – in this case, towering cliffs as the island tears itself apart, from its pylons 5 miles deep into the ocean to 10,000′ into the sky. But unlike Alaska, almost every centimeter is covered in green.

Many of Alaska’s great natural skyscrapers are bare faced. Reunion’s are lush and fuzzy with deep greens, even though this is winter and the least brilliant season. I’ve seen many volcanoes around the world, and Hawaii’s are exceptional. But Reunion’s Plaines de Sable is absolutely Mars. Not like Mars. I really think it came from Mars. It looks exactly like Rover’s pictures.

But best of all, Reunion’s endemics were the most splendid and the easiest for us to find. This morning almost first thing as we entered Cilaos we saw the Mascarene’s only raptor, the Reunion Harrier.

Not acting like a harrier at all, but more like a buteo soaring the cliffs, this bird is a perfect example of peripatric speciation, as so much island evolution is. Exactly like the Reunion Stonechat, which we also saw and did not behave like the millions of other African stonechats, Reunion’s endemics rather quickly evolved to fill niches totally unlike those that their ancestors fill.

In some cases this really requires physical change, but in both the harrier and stonechat, it didn’t. At least nothing extremely visible, although I suspect the way the Reunion harrier soars, and the altitude at which the stonechat resides, there have to be some physical differences with their continental cousins.

We saw quite a few other Mascarene endemics. Perhaps the most fascinating was the Reunion Flycatcher, virtually indistinguishable except under controlled lighting, from the Mauritian flycatcher, yet DNA typing distinguishes them as separate species.

In this case through genetic drift, another critical concept for understanding evolution.

None of these concepts are simple to grasp, however crucial to truly understanding evolution. But they are much, much simpler to understand when you see and listen and hear about them in the wild, as we were so fortunate to have done.

Tomorrow we head to Madagascar. We’re leaving the developed world actually for the struggles of Africa, but struggles that in an ironic way have protected parts of its wilderness lost to the Mascarene. Stay tuned!