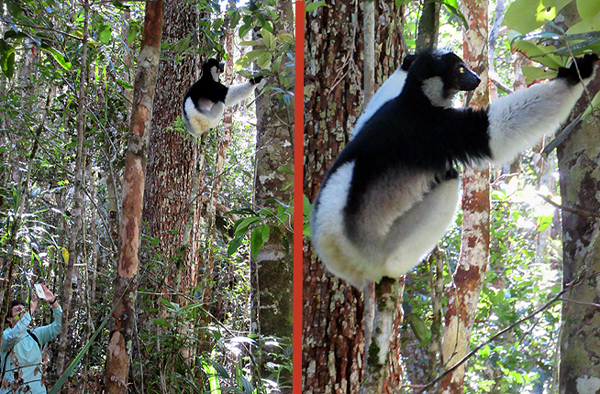 Barely two months ago an historic hurricane devastated much of the eastern side of Madagascar. This is where so many of its precious endemic species are found, especially the lemurs.

The two largest lemurs, the sifaka and indri, were among the hardest hit. In the forest of Analamazaotra where we trekked today, the rivers had quintipled in size for two days of rage, tearing down not only pedestrian bridges, but many trees on which the lemurs feed.

Normally benign towards one another, we saw them fighting today.

We’d hardly stepped beyond the introduced forest that surrounded the national park building before hearing indri screaming. The first time you heard the incredibly piercing, siren-scream your entire being screeches to a halt. Is it human? Is someone hurt? Is it a broken nuclear air raid horn warning of the apocalypse?

The first explorers to hear the sound were so frightened by it, that the named the animal, Lemur, from the Greek “ghost.”

But after the initial shock, smiles spread across everyone’s faces. This is what we came to see! So we started our trek in the direction of the screams, immediately interrupted by a giant Parson’s chameleon, the size of a football. A little bit further and we encountered one of the world’s smallest chameleons! Everywhere tweeting around us were souimanga sunbirds and Madagascar bulbuls. We hadn’t even yet reached the primary forest and had encountered a half dozen endemics!

We crossed the river that had done so much damage. Park authorities had simply and quickly built a new footbridge over the old pylons, so into the primary forest we charged.

The new bridge was about 25 meters wide, easily spanning the river below. But no match for the crab and Darwin spiders whose nets stretched entirely across the river!

The jungle was fascinating. We saw the landmark travelers’ trees everywhere. Suddenly spreading above the path and all our heads was the Madagascar fern, then the equally gigantic M??Madagascar sisal, two of the oldest plants on earth, likely first consumed by dinosaurs.

Lemurs was our mission, but we had to halt for the giant Blue Coua, a turkey like luminescent bird that bounces around the jungle, up and down, like a self-propelled soccer ball.

Finally our guide ordered us to halt. He listened and then led us into the thick jungle and within minutes we were surrounded by a family of 9 sifaka. They are undoubtedly the most beautiful of the lemurs, displaying nearly pure white tails and blotches of orange across a lightly colored body.

They were feeding on the serigada tree, leaping effortlessly 10-15m in the mid-canopy, wrapping themselves around the trunks then stretching out to pull in newly emerged leaves. They didn’t seem to be bothered by us in the least, but neither did the same curious about us. We were invisible, which was marvelous!

But the sifaka were pushing the envelope. Although their territory overlaps the indri and the two normally coexist fine together, the hurricane had changed that. This was also winter. The abundance of new leaves was normally much less than a few months ago. And there were no fruits or seeds. They were infringing on a family of 3 indri.

A piercing three-honk scream crashed through the forest. The spectacular black-and-white indri arrived like superman from the clouds, crashing into the family of sifaka. They scattered as if a mortar had been blown amongst them.

The second indri, the adult female, attacked them from the side and further scattered them. The sifaka aren’t that much smaller than the indri, and traveling in polygamous families sometimes as large as ten, they greatly outnumbered the three indri. And what’s more, the two species don’t even prefer to eat the same things!

But it was an unusual time. The forest will take some time to recover from the hurricane. The indri – who will be even more aggressive to other indri – wanted no intruders. When the sifaka scattered far enough away, the male began to eat, again, followed by the female and nearly adult child. Their forest was secure, again, at least for a while.

Their only predator other than man is the fousa, Madagascar’s quasi cat that climbs trees to eat lemurs. But it’s winter. The fousa was hibernating. The lemur had nothing to fear but other lemur.

To our enormous advantage. They were all over us. Susan said had she stretched out her arm, she could have touched one!

This is our third day in the forest. We’ve seen ten kinds of lemurs so far. (There are 112kinds throughout the country!) This forest is home to the fabled ais-ais. We saw his insect traps, but the odd creature, the only in his family of lemurs, is solitary and strictly nocturnal, commanding territories that are more than 120 acres large!

Yet even unseen it resonants the value of lemurs like none of its distant cousins. With behavior and some anatomy – particularly teeth like a rat – it is the only still living clue to suggest that rodents and primates (and probably, therefore, all mammals) have a common ancestor in the so distant, distant past.

That probably describes Madagascar better than anything else: the primativism, weirdism and isolation of the so so distant past. Did I tell you we also saw the giraffe-necked beetle and minuscule long-antennaed cricket? Look those up for some incredible entertainment!

Another week in these isolated lands. Apologies because wifi is so rare. I’ll post when I can.