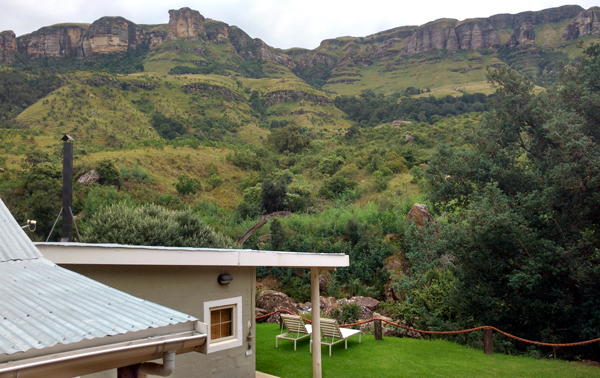 No one likes a braggart, a swashbuckler, a hotshot. But would you prefer instead a bootlicker, someone whose meekness is frighteningly unreal?

I’m sitting at my dining table typing this in a remote stone cottage just under the Little Berg of South Africa’s Drakensberg Mountains. Except for the wild brown trout stream gushing over large rocks just below my patio the night was still and cold. I slept long and hard and was awaken by mountain bird chirping hidden in the heavy mists draped off the Berg. This is the perfect place to reflect on such questions.

For the contrasts between South Africa and the rest of sub-Saharan Africa are harsh and bewildering.

I left the crater after breakfast with my last East African safari group two days ago. We flew back to Arusha, did shopping, drove to the international airport’s hardly acceptable little motel to repack before beginning a bunch of different journeys.

Most people went straight home, via Amsterdam or Addis Ababa. Some to Munich. Some to Switzerland. I was the only one traveling south, further away from home.

By midnight South African time I was in Johannesburg. O.R. Tambo international airport had started to go to sleep as we were one of the last flights in. But the multitude of aircraft parked at the many gates, the transit passengers curled in corners or tumbled over resting chairs, and the taxi touts still asking for my business as I exited customs reflected a new, modern world I hadn’t seen for more than seven weeks.

The check-in clerk at the Intercontinental processed me quickly and correctly with a slightly looking personal fatigue that I had arrived so late. Contrast that with check-ins throughout the rest of sub-Saharan Africa for which I must allocate significant blocks of precious time.

My room worked. The lights flipped on when I turned on the switch, the wifi seemed to anticipate my logging on, the water was boiling hot for my bath and the tea/coffee station was brimming with choices and plenty of milk.

The TV worked with a single remote. I immediately Skyped my wife before hitting the sack which greeted me like a prodigal son.

The next morning I checked out, had breakfast at the airport and flew to Durban. It was like I had checked out of the O’Hare Hilton and flew to New York. I threw my bags into my AVIS SUV and ran into Woolworth’s to get some road provisions.

Except for the fact I’m driving on the wrong side of the road, the N2 to N3 highways were like the I90 to I94 interchange. Durban was hot and muggy reminding me as it always does of Miami. I actually had to turn down the a/c it was so forceful. Turned off the a/c and rolled down the windows as the highway climbed to Pietermaritzburg.

I exited at Nottingham Rd and raced into the SPAR grocery store to get a week’s provisions. The place had more than I needed including some very nice wines. Back on a state road fondly called the “Midlands Meander,” I twisted and turned upwards towards South Africa’s highest mountain.

Soft and green with an amazing array of late summer wildflowers plastered in the hills and nooks and crannies beneath the heavy overcast sky, I could have been driving in Scotland. There were numerous little places to stay, pubs, roadside stores selling Belgian chocolates and side street coffee houses. Fall is just coming to South Africa, so there’s a chill in the air up here.

The last twenty miles or so were rather treacherous, because of so many potholes. I’d entered a very white area. Whites own most of the beautiful land up here. Some is productive dairy and agriculture, but most are hobby farms of rich whites who inherited the great sugar cane farms of the Durban coast. Making their lives any smoother is not a high priority of the current government.

My potholed tarmac road turned into gravel and before I knew it I was following a barely discernible track through high grasses just below the Berg. I went over two streams before deciding to turn back, but got twisted up and ended up in someone’s lawn!

The lovely couple came running out. I had trouble understanding their deep Boer accents but after explaining my dilemma the old stocky man in bare feet directed me carefully back onto a track that took me to the gravel road.

On the way I helped a woman with my car herd three errant donkeys back into her corral. They were so pleased they invited me in, but I traded that for better directions. Soon I managed to arrive at Cleopatra Mountain Farmhouse. Mark, the host and erstwhile safari guide in the Serengeti, took me another few kilometers to my private, remote stone cottage.

To say it’s lovely or perfect is an understatement and difficult. There’s another big difference here with the rest of sub-Saharan Africa. Below the beauty and perfection of the landscape and the daily life layered upon it, there is a frightening undercurrent. The blacks are submissive. Not sycophantic like the worst of people anywhere, but timid like the oppressed who fear the next moment.

Whether flipping burgers at Wendy’s for me, or serving my gourmet duck dinner last night, their politeness and surface friendliness is so different to the assertive and proud Tanzanian or Kenyan. They’re probably much better off. Last night, so was I.