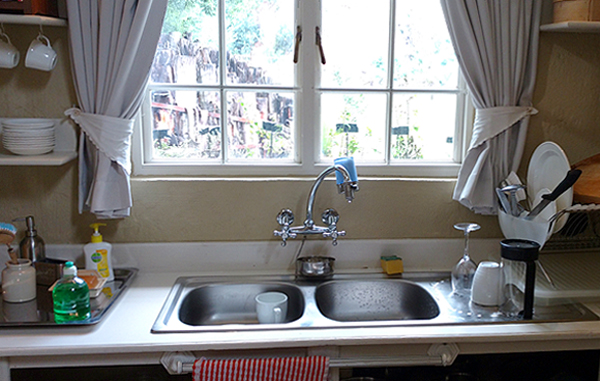 The river just below my front patio roars with unusually strong, late summer rains. Tons of fresh sparkling water crashes onto the ancient dolomite boulders that haven’t moved since the beginning of time. The gushing is so loud I can’t hear her when she arrives.

She walks 15k from her small village of high mountain people who were displaced centuries ago from the verdant grasslands of the coast by the great Zulu warrior, Shaka. Her large, weathered face carriers that history, and ages of injustice that followed.

Her entire body is wrapped in thick clothes. Winter is on its way. The mornings are specially cold. She starts her walk here each morning just as the sun whistles away the cold pink clouds draped over the Berg, all that’s left of an exhausted night of bombastic thunder, lightning and sheets of rains that should have ended with the summer calendar a month ago. Rubber boots must ease her journey. Gravel roads and paths are sharp.

Her thick yellow-brown cotton leggings are heavily crimped. Probably like us all she shrinks with time. A heavy soiled blue skirt falls beneath her knees. She wears a heavy, dark beige large knit sweater whose pattern has been lost. Her shirt buckles up at the wrists stopped by large, strong hands. What’s left of her hair is tightly bound under a red linen turban, stylishly folded and tucked to look like a hat.

She calls herself, Tem.

“Good morning, Tem!” I routinely proffer with my first knowledge that she’s arrived to clean my beautiful stone cottage. The first time I greeted her she seemed to hesitate. She looked down but turned her head to me and some of her wrinkles melded into the beginning of a smile. She replied quickly in a low, gruff voice, but I don’t know what she said.

She removes her boots before entering the cottage. Her yellow socks are worn and soiled and thick. Even though I wash my own dishes, she re-sorts them if I’ve placed them on the wrong shelf.

Even though I tidy up my own sink after shaving and brushing my teeth, she wipes the porcelain until it shines.

I think she’s specially critical that I make my own bed. And even though I use only one of the three bedrooms, she goes into the other two and opens or closes the windows, wipes out the wrinkle she inadvertently left on the covers the day before, wipes the unused sinks.

When the inside is finished, she goes outside. I watch her working through the kitchen window. She starts by cleaning the large braai that I don’t use. She uses a stiff hand broom to whisk away every fragment of a fall leaf that might have drifted onto the concrete foundation. Even though I haven’t yet sat on any of the lawn chairs, she unwraps the hose and cleans them again, wiping every drop of water off before leaving.

I didn’t want her to leave. I offered her tea. I drink tons of tea and she’s here for several hours every morning. I feel rude drinking tea alone as Tem cleans bedrooms I don’t use. But she doesn’t answer me.

I wanted to ask her how much she’s paid, how old she is, if she has a family and what they do, if she celebrates holidays or ever goes into Howick or even Pietermaritzburg. I want to know how she sees the current national love-fest with the recently died Winnie Mandela, what she thought of Zuma and now, Ramaphosa. We could have done that over a cup of tea or two.

But Tem’s life doesn’t countenance such foreign encounters. I feel ashamed because she won’t look at me.

Is that her peoples’ revenge? Am I to be ostracized because I’m white and rich? I’m a victim of both, you realize. I was born that way. There’s nothing realistic that I can do about either condition. Surely Tem knows that.

Monday at the Mooi River toll plaza on the country’s busiest highway, N3, there was such riot and mayhem that this critical link between Johannesburg and its coast at Durban was closed for several days.

Tem lives not far from there, but the town adjacent the toll plaza is a world away from her sleepy mountain village. It’s more urban and a lot bigger. Unlike hers many young people stay there. The young people are mostly unemployed.

When much better off truckers staged what was supposed to be a temporary highway blockage on Monday at Mooi River to protest foreign companies getting government transport contracts, suddenly the town adjacent the highway grew like a mushroom in the late summer rains.

No one realized how many young men lived in that town. When the truckers thought they had achieved their protest and were celebrating the closure of the main conduit between the country’s two important cities, hundreds – was it thousands? – of young men ran out of the town at the truckers.

Truckers fled into the mountain forests for safety as their 18-wheelers exploded and burned to the ground. Police arrived but when they saw the mayhem they pulled their white cars back and let the fires engulf the tour plaza.

There is just so much that can burn. The highway reopened yesterday.

Black Mercedes don’t have to pay a toll for the time being at Moor River until the gates are rebuilt. Some asphalt still smoulders but drive fast enough and all you’ll suffer is the acrid smell of burning tar that clings to leather. Never mind. There are really great car washes in Durban just near the new super port junction. They do really good detail work really fast.

Tem is gone, now. She’ll be back, tomorrow. Do I leave her some dishes to wash?