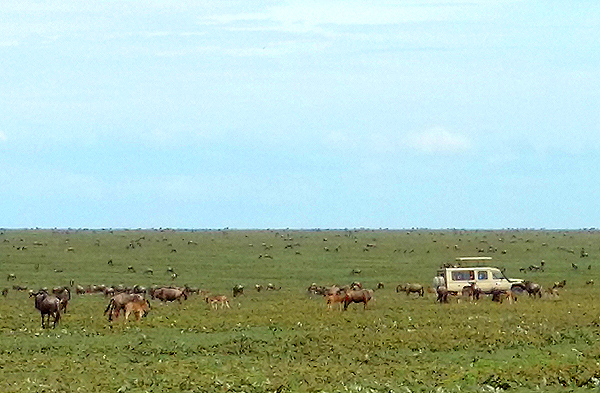 I suppose every “big” event, whether NASCAR or a high school spelling bee, has a baseline everyone knows: Winners and losers are known and handicapped, so the drama often comes in the unexpected. That for sure has been the Great Migration ever since global warming.

But not this year!

I insist on at least 4 nights/5 days in the Serengeti/NCA to find the great migration. It’s a big place! We’re talking about nearly 8000 sq. miles! That’s just a little bit less than New Jersey!

So even though nearly two million animals are involved, recently they’ve rarely clumped up together. In the last few decades since global warming really got going, they’re usually fractured all over the place.

That’s because the driving force is grass, new grass, nutrient grass. Go north into Kenya and there’s plenty of grassland, but it’s 1000-2000 feet higher in altitude. That results in a less nutritious meal. This is when the wilde calve. The moms need good stuff to produce really rich milk. The calves have only 3 months before they have to run as fast and as long as any adult.

So the routine for eons had been for the millions of animals to congregate on the most nutrient grasses of the ecosystem, the southern grassland plains. Perfect sense.

Unless it doesn’t rain. That’s how global warming comes in.

That was fine until global warming. Global warming dumped huge additional amounts of moisture into the equatorial jet streams and like a balloon overinflated with water, massively concentrated rain systems dump everything in a single pop. So many places are flooded while nearby there’s a drought.

This year thank goodness the southern plains got rained on all over the place (except remarkably, right above Lakes Ndutu and Masek). Just like the text books say. Just like it was for every year not too long ago.

So we first saw the massive herds from Naabi Hill, east-south-and west for as far as our binocs could reach. Literally, an area about 65 x 25 miles was filled with wilde. No contest.

Thursday we went down to the Keskio Valley. Tumaini and I found the remains of an old German (WWI) fort there years ago. It lies just in front of Ngorongoro, and we call the place we set up breakfast “Round Table Hill.”

I suppose the hill is less than 400 feet above the plains, but with plains in every which direction we can see for 50 miles. This year miles and miles of wilde.

Friday we crossed the entire southern Serengeti area, starting at Ndutu and traveling east to Lemuta. I love this drive because we never ever meet a single other car, and I’ve been writing for years how absolutely ridiculous this is.

Because the migration is usually here even when fractured. This year in spades, for hours and hours of driving. There were wilde right into Olduvai Gorge, the southern boundary before the massive Ngorongoro.

And of course it isn’t just wilde. My folks filmed a lion encounter when a young male interloper tried to kill older cubs and was stopped by two females. Kakkie Cunningham’s photos are prize winners.

We saw a zebra, paralyzed from the back down, with easily 200 vultures waiting just behind it. We saw no wounds whatever. We chased a single hyaena away as we approached, but the poor thing had no sign of any fight. It must just have snapped its spine.

We saw 30 eland – the world’s largest antelope – jumping ten feet into the sky and kicking their hind legs out at us as they ran away.

We saw some of the last golden jackal, a precious little creature that is being subsumed by the interbreeding of the black-backed.

But guess what was my prize? A bird, rather two birds. There we were in the middle of nowhere on a kopjes overlooking hundreds and hundreds miles of the most beautiful earth imaginable.

I dutifully walked around the kopjes, which I knew from previous visits could have snakes, before letting everyone out of the car in a free for all with nature.

Two great European spotted owls on their way back to Europe, had apparently fallen out of the high sky onto this rock in the middle of nowhere. I unintentionally scared them out with my bevy of rocks against the granite boulder. Didn’t mean to, but need to flush out those cobras.

They didn’t fly away. They migrate at night and nothing around them for dozens of miles was familiar besides this kopjes’ gnarled bushes and little trees and grasses that are able to survive with the little bit more of moisture they capture from the great plains.

What a find! Folks were photographing them for an hour or more!

Then we headed to Ngorongoro. My goodness I don’t know if I’ve ever seen the veld so beautiful. At a distance of 20 miles, the white puff clover covering the plains beneath Ngorongoro looked like a great salt lake. Closer as we climbed the rim, entire mountainsides were yellow with the little bidens-bidens daisies stretching out of mountainsides of lush green grass.

Should we have been surprised that a rainbow then formed over Ngorongoro?