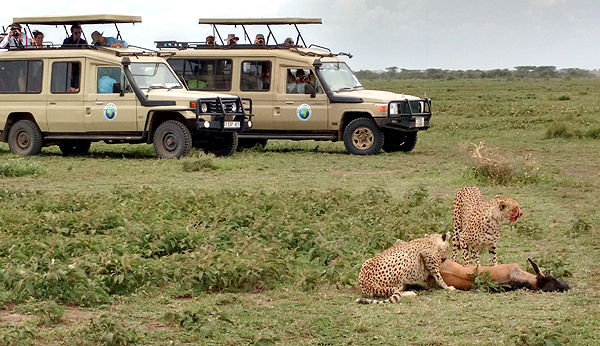 No zebra. No wildebeest. A handful of gazelle. Just a handful of giraffe. Everyone was ecstatic, because there were 25 lion and a leopard, but I was worried.

Seronera was lush. The rains had come full cycle and it was one of the most beautiful velds I’d seen in a long time. On the great plains between Seronera and Moru every wildflower you can imagine was in bloom.

The yellow bidens-bidens stretches up like a miniature daisy on a long, thin stem and was waving majestically in the breezes. Little fire poppers, red pea derivatives sprung up everywhere. There were purple and blue flowers, creeping vines with pinpoint orange flowers and the gorgeous tissue paper flowers were everywhere.

The veld was healthy and strong. So where were the damn animals?! I couldn’t remember a time when I’d been in Seronera that I hadn’t seen hundreds of zebra. This time? None.

First-timers, maybe even second timers don’t recognize the change from normal and perhaps that’s because even the most abnormal situation is a dramatic, beautiful discovery. One of the first symptoms of large ungulates leaving with less food for the big cats is fewer little ones.

The mothers and older siblings might do just fine, but there just isn’t that extra oomph for nursing. Cubs that are born die. Pregnant females often abort.

So with fingers crossed we headed south today after two days in the Seronera area. I was relieved that even a veteran traveler with me said it was “fantastic game viewing.” Of course that’s subjective. It was in a sense, but from my perspective I was worried.

Then as we swung down the main road passed the giant Simba kopjes I touched Tumaini and he stopped driving. In the horizon I saw a line of zebra. We smiled at one another and continued on.

At Naabi, the giant kopjes in the south central part of the great southern plains, the answer was all around us. Virtually all of the migration was in the southern grassland plains. That’s unusual. There are so many animals that they usually all don’t do the same thing.

I took my group up Naabi to the top. The winds were ferocious. I was afraid Delta, who had been with me on many trips back many years and was now a fit and active but little lady, might be blown away!

So off we went with spirits high and excited, to place our picnic lunch in the bottom of Hidden Valley where I expected tens of thousands of wilde to surround us. As we started over the plains we stopped several times to let frantically running files of wildebeest run in front of us, kicking up heaves of dust, often kicking both feet up at us at the same time as if to say, “Look out!”

Hundreds and then a multiple of thousands ran past us. We kept going towards Ndutu, only when getting near the forest did we actually exit the herds. That was the plan. Follow the edge of the forest then head back north to Hidden Valley.

Plan B. We hardly got through the edge of the Ndutu forest, hardly a quarter of the way to Hidden Valley when there in the road were two lovely male cheetah.

Wonderful, I thought. Let’s take 10 minutes of pictures. Maybe they’ll jump on our car for a better view. But T had hardly stopped the car when I saw one of them with their near owl-like swivelled head look behind him.

The two clicked into action. They were hunting. But what?

T and I scanned the horizon towards the forest in the direction they were now walking fast. I saw a marabou stork, hardly a possibility. But then Tumaini saw the target. How he saw it I’ll never know, but he directed my binoc gaze and sure enough, there was a baby wilde.

Baby wilde when separated from their mothers are doomed. No other female will take them on, and many of the mothers will abandon them after a couple hours. Imagine these tens of thousands of animals and how many thousands are separated from one another.

Careful not to disrupt the kill, we headed over the plains trying to keep up with the two brothers but at a distance of at least 300 yards. I told everyone in my car to keep their binocs fixed on the cheetah.

The baby wilde had no idea. Obviously it had been wandering for a couple days. It was exhausted, long beyond distressed.

Then the one brother tore out. Cheetah spring from a fast walk to 60 miles an hour in a few seconds. The can sustain that for almost a half minute. This time, it was about 4 seconds.

The baby was down. The brother who had run to make the kill clamped the neck strangling it. The other began eating immediately. Normally the cheetah have to wait 10-15 minutes just to get their breath back, but the second brother hadn’t even run.

It was about 7 minutes after the take-down that the first brother unclasped his jaws and stood up. He was still hyperventilating, but it was only a second before he then joined brother 1 in the feast.

We watched them for quite a while. Their bellies began to bulge. Cheetah are the fastest eaters on the veld. Every once in a while one of them would stand up and look around for the inevitable hyaena that would come to steal their kill.

Our presence was interrupting that natural occurrence, so I took our vehicles about a half-mile away. We could still watch them with binocs, but we made a wind break with our vehicles and set up our own lunch in the middle.

We watched the vultures start to hatch out of the sky. Towards the end of lunch I saw hyaena in the far distance, but I knew they wouldn’t come to the kill until we were out of sight.

So after a wonderful lunch and robust conversation we packed up and went back to the kill. The brothers were bursting at the seams and after about ten minutes decided to leave to get the water they had to drink before their GI system froze.

The moment they were 20 meters away, the birds descended on the kill. Marabou; hooded, white-faced, white-backed, Griffins and the giant lappet-faced all jumped on the kill in absolute mayhem. More vultures dropped from the sky. The large Marabou stocks had trouble inching in. Only the grand lappet-faced, its wings spread out in obviously challenge, could ever clear a moment’s path for itself.

It was mostly gone in 20 minutes. We headed to the forest to complete our game drive. Another lion, another 3 cheetah and then the beautiful view of Lake Ndutu filled with new rains, glistening in the afternoon light under Ngorongoro.