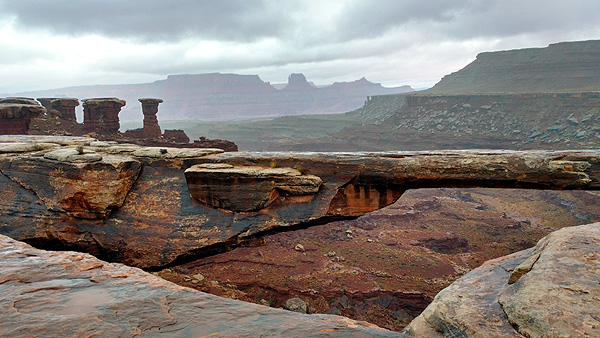 As an African guide I search for those less used places that prove just as grand, so that my clients don’t become discouraged. That’s exactly how Kathleen and I approached our vacation to Utah’s parks. We hired guides who knew how to avoid the crowds but still find the treasures. We weren’t disappointed!

In Canyonlands, Arches and Canyon de Chelly, we squeezed into powerful Toyota Landcruisers driven by excellent driver/guides. Avoiding main entrances, we entered via back roads often over private land.

We were rarely on paved roads. The Jeep Grand Cherokee that we’ve rented meets the national park service specs needed to get into these areas but I’m very glad we didn’t try most of them. We only drove ourselves over the difficult Valley of the Gods road outside Monument Valley, but I turned back after one little hump where I couldn’t see the road continuing and there was a 400-foot drop to our left!

Experienced driver/guides took us over the magnificent Shafer and White Rim trails of Canyonlands, and though much easier, the Salt Valley Road of Arches.

We saw practically no one. In several cases we then exited through the main entrances, and even at the end of the day, saw lines of vehicles waiting to get in. I really couldn’t understand it, because most were ordinary cars or tour buses and vans with little chance of having much daylight left.

I do the same thing in Africa. Into the Lemuta plains of the Serengeti or the Kerio Valley of the NCAA we traverse vast areas usually filled with game and see nobody else. It takes special vehicles and special drivers to do this, and just like my own situation in East Africa, it takes at least two vehicles for safety. Even though Kathleen and I hired a private tour with our own guide and single vehicle for the various Utah parks, our driver/guides insisted on traveling in tandem with another guide for safety.

By the way, just as in my own case with Ngorongoro Crater, our private driver/guides through the Utah parks warned us that we can’t miss the most heavily visited sites. There’s a reason they’re heavily visited! So we suffered the crowds at Two Windows in Arches just as I insist my clients go down into Ngorongoro Crater National Park.

The nearly 5 million visitors expected this year to a single Utah national park has provoked authorities to consider a reservations system at least for Zion national park. This is exactly what the authorities at Ngorongoro have considered.

The other equally critical side of the coin is the health of the ecosystem. In East Africa it’s the topsoil, and the reason there are fewer and fewer off-road areas. It’s why on our own safaris into these areas we avoid recent tracks while sticking to deep, old tracks that have little chance of regeneration.

In Utah it’s the same. Utah is a high desert and the cryptobiotic soil crust that holds the entire ecosystem together is never more than about 5″ deep! It may take a decade to form before a Joshua tree or pinon pine can form root. A single bootstep can destroy 20 years of creation.

Imagine trying to keep 5 million people on the trails!
The balance between preserving the earth’s wildernesses and making them accessible to people strikes me as just as great a challenge as addressing the growing wildlife/human conflict in East Africa.

Scientists know the value of biodiversity, but we laymen know the value of experiential diversity and especially that of the diminishing wildernesses of the earth. How much constraint must be placed on our experiences for them to remain viable?