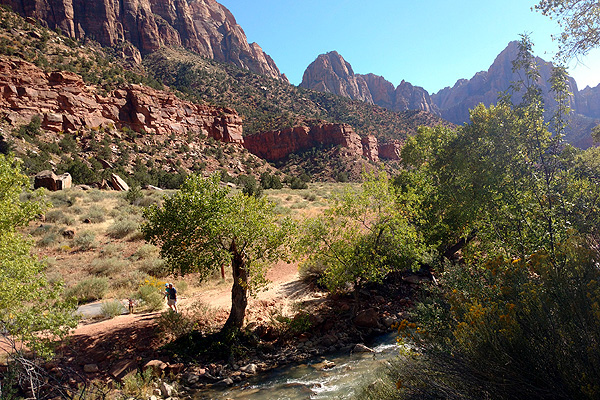 What will Ngorongoro or the Mara look like in 20 years? We ended 12 days exploring the southwest at America’s most heavily used park, Zion, for an answer.

A ranger told me that while July is normally the most crowded month in Zion, “This year every month has 20,000 (visitors). I had a wonderful time, but the African guide in me couldn’t shake annoyance with so many other people around. Both Kathleen and I were laughing hysterically as we watched 7 people on a trail taking a picture of a squirrel!

Yosemite, Rocky Mountain and Zion respectively attract the most visitors each year. But Zion is teeny-weeny compared to Yosemite. Annual use per square mile is 4300 in Yosemite; 10,900 in Rocky Mountain but a whopping 18,800 in Zion!

This is not because Zion is the most spectacular national park. We visited five on this trip, plus three more national monuments and two national forests. Don’t get me wrong, Zion is fantastic, but I’d put it at the bottom of my list of “spectacles” or “grandeur.”

Zion is probably the most heavily used park because it’s so close to Las Vegas. We met several people on our two days here that were on day trips from Vegas.

Most African parks don’t lend themselves to day trips, and use per square mile even on the most heavily used parks like Kruger or the Maasai Mara remains a fraction of Americas’. Nevertheless over usage most notably in Ngorongoro Crater has caused widespread concern by park authorities and conservationists alike. There’s a lot that Africans can learn from us Americans when it comes to running increasingly popular parks.

It’s increasingly likely that a reservations system will be necessary for Zion. It’s been talked about for several years, but if as the ranger explained to me yesterday, usage really tops 6 million for this year, that’s completely unsustainable.

Zion was the first park to introduce mandatory shuttle bus usage between its main attractions in 1999 when visitor numbers topped 2.5 million. (Denali’s mandatory bus service has been in place longer, but this was because of its unstable roads and massive distances difficult for rescue operations)

Back then it caused massive controversy. I can’t imagine Zion operating without it, today. We waited all but 35 minutes to get onto a shuttle from the visitor’s center, and I was impressed. The line we joined seemed ridiculously long, but the shuttles moved through rapidly.

All our buses were full. We explored three of the eight major hiking trails, and they were all crowded, especially the “Narrows” which is the furthest shuttle stop.

Ngorongoro has tried then continuously aborted every attempt at a reservations system, and abandoned mandatory visitation by government operated vehicles and driver/guides in 1983. So it’s not a new issue to East Africa, but every attempt to institute some type of restrictive policy has caused such a backlash by tourism vendors that the government has relented.

I’m in the crater multiple times every year, throughout the year. It is getting crowded, and it annoys me, but it can’t begin to reach the usage of an American national park. Of course it dare not.

The most wildlife we noticed was in Canyonlands, and undoubtedly that was because we saw so few other visitors. The coyotes, elk and bear tracks we saw were actually outside national parks!

But Zion’s principal attractions, like that of most other American parks, is not wildlife. It’s the august scenery, geology and avifauna. We were fortunate with brilliant weather for most of our trip, and the composite scenery that we experienced was amazing.

I am incredibly impressed by our Parks Service. The access we Americans have to these great areas of natural wonder is unbelievable. The operation of not just the shuttle service, but the gate management, the conservation enforcement, the trail and rescue system, I have to believe is unmatched anywhere.

So Africa, take note. Part of the success in managing lots of visitors comes from managing other areas equally as well, like conservation and gate management. And on that front, Africa has a long way to go.