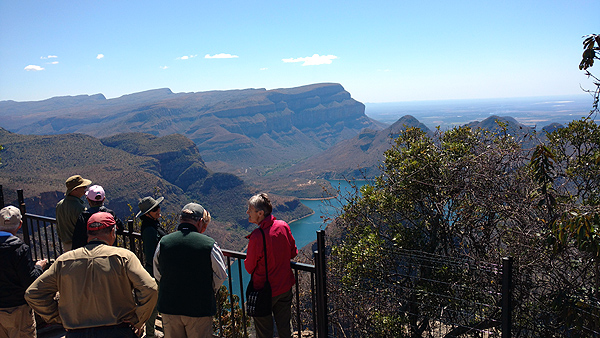 Monday we spent touring what many South Africans consider the most beautiful part of their country, the “Panoramic Route.”

The route covers a part of the northern Drakensberg Mountain Range in the eastern part of the country. These are very small mountains by North American standards. The highest point, Thabana Ntlenyana, is just under 11,500′ on the border with Lesotho.

Most of the range is 6-8,000′. Where we were is actually even lower, but because of the literally billions of years of tectonics effecting this part of Africa, beautiful and unusual formations have been created.

Blyde River Canyon is one of the largest in the world and one of the few which is green throughout the year. Bourke’s Luck Potholes are truly weird geological formations at the beginning of the Canyon where two rivers merge.

The merging of the rivers and the sedentary rock below them form a “Giant’s Kettle” or swirling phenomenon that drills holes into the rock that grow progressively larger. Unlike many geological features here that took millions of years to produce, these were probably created in a few thousand years and continue to deepen.

The steepest part of the canyon is God’s Window, with sheer drops of 2,000′. Several of our group braved the narrow pathways and steep incline to reach the fascinating rainforest at the top.